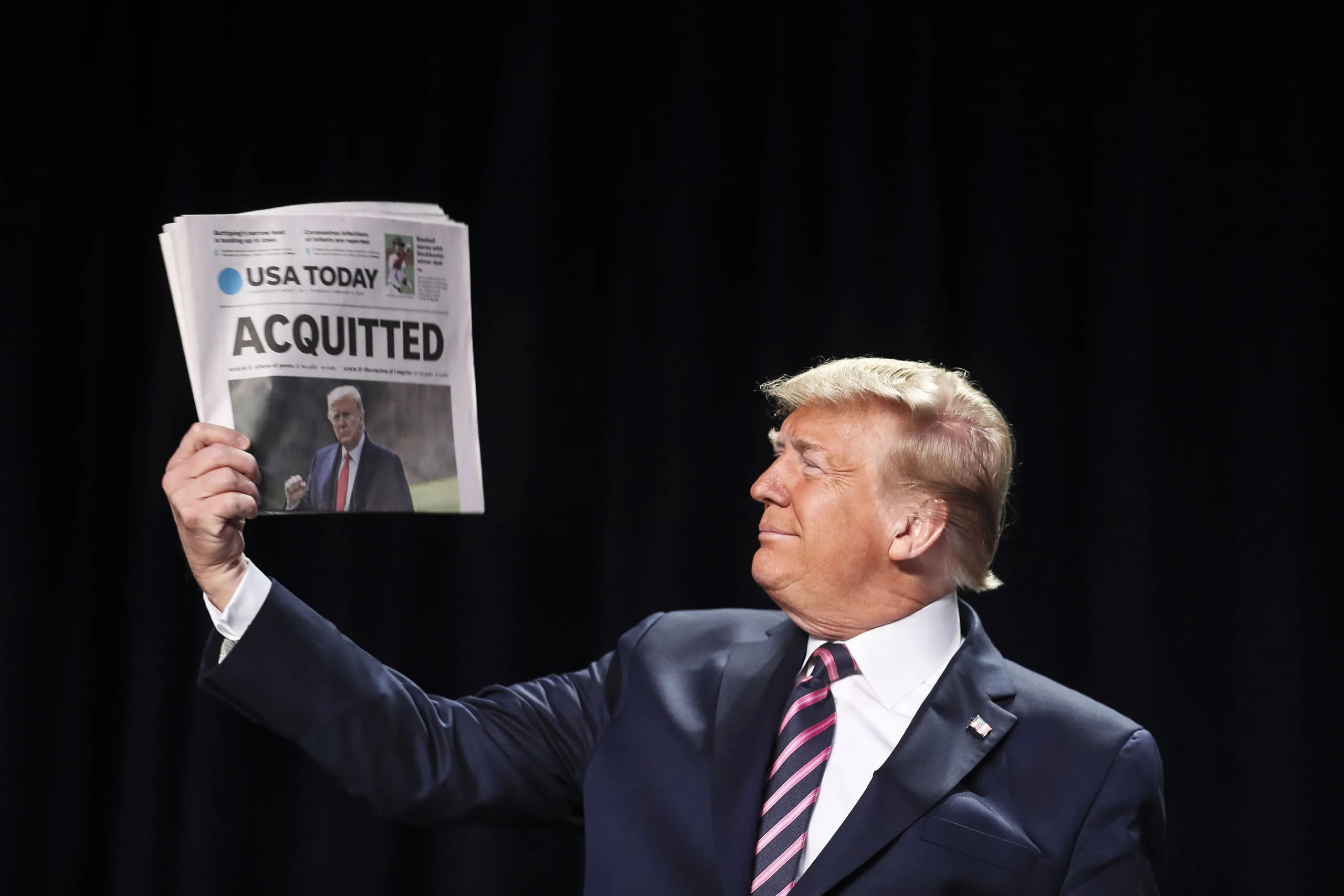 The forty three Republican Senators who voted not to convict the former president of incitement and insurrection were showing mercy to a cruel man.  During the riot itself, while the lives of those inside the Capitol and their families were at risk, Trump told then-Republican majority leader Kevin McCarthy that those who were rioting must care more about the vote than he did, and failed to call or check on his second in command Mike Pence who had been evacuated.

Instead, the man in charge of leading the free world sat in his White House residence and watched his followers desecrate the place where a peaceful transfer of power was supposed to take place.  They attacked officers of the law with flags bearing his name, stole laptops from offices, and smeared feces on the walls.  The cruelty of the attack was mirrored in the cruel actions of the man motivating it at the top, a man responsible not only for the loss of 5 lives that day (and two other Capitol police officers who died by suicide soon after), but also the forty percent more Americans who died from Covid than would have were better protective restrictions in place.

Those senators who refused to convict have good reasons, according to David Leonhardt. Even though public opinion is against the actions of Trump on January 6, that of Republicans is with him.  What seems hard to fathom though, is that even though they themselves were under attack and their loyalty to Trump was not returned by any concern about them on his part, they chose not to convict.

What concerns me is what this vote says about them, their voters, and by extension our country.  What is the outcome of showing mercy to the cruel?

The Torah reading Jews around the world read from on Saturday, February 13, Exodus 21:1- 24:18 includes a verse from Exodus 21:14, “When a man schemes against another and kills him treacherously, you shall take him from My very altar to be put to death. ” The medieval doctor and scholar Moses Maimonides in The Guide to the Perplexed wrote about this verse:

“The wicked and calculating person (who killed intentionally and was sentenced to death) – if he seeks sanctuary among us, we must not provide him with asylum and not have mercy upon him… because compassion towards the wicked – is cruelty to all beings.” Part 3, Chapter 39.

Let that sink in: when one who has intentionally killed seeks sanctuary, we must not show mercy because that will be cruel to all beings.   Trump sent his mob out to do what they felt necessary to make the peaceful transition of power stop.  Any mercy shown to them ultimately becomes cruelty to others, the families of those who lost their lives, and all those who will have to live the remainder of their days with injuries sustained then.

Those who enabled Trump in his multiple false claims about election fraud are participants in his delusion of a victory are guilty too of cruelty to all beings.  The Washington Post estimates that voter fraud suits have cost taxpayers approximately $519 million dollars so far – one of the many costs of Trump’s cruelty.

We know the costs of his cruelty haven’t just been economic.  Starting with the campaign of Donald Trump in 2016 when he mocked a disabled reporter and a Muslim family whose son was killed in our American army, we have seen the glee Trump took in harming others.  That the culmination of his presidency would be an insurrection by a riotous mob acting out of a misplaced sense of aggrievement and victimization, which presidential historian Kathleen Cramer Brownell has said will be “the defining moment of his presidency,” seems almost foreordained.

Trump never got his big Fourth of July parade of tanks in front of the White House as he had wanted since he saw one on Bastille Day in France; he did get a stereophonic display of his own making, the cruelty he delights in with his followers rampaging, costumed in their outfits speaking of grievance against others and white supremacy.  The Confederate flag, sweatshirts bearing the logos “Camp Auschwitz” and “6 Million wasn’t enough” were the armor his troops proudly wore.

What can Jewish values teach us about where to stand and what to do in the aftermath?  The Talmud teaches in Yevamot 79a that “There are three distinguishing marks of this nation, the Jewish people. They are merciful, they are shamefaced, and they perform acts of kindness.”

To remain true to our values, we need to advocate for mercy where appropriate, not mercy that is undeserved.  As Joel Swanson wrote in the Forward, one of the conditions of repentance is atonement and where none is forthcoming,  a mulligan or any other kindness should not be granted.   If a person is cruel to other humans, whether or not they agree with him, that person is not a leader we should be following, as we are a people whose distinguishing marks are mercy and kindness.  Yet that mercy must be placed appropriately: the corollary of showing mercy to the cruel, means that ultimately, we will end up being cruel to the merciful.

We can call our senators and either thank them for their vote if we agree with it or tell them why they were wrong and why we will be working to unseat them in the next election.   Letting those we elected know that we won’t tolerate mercy to the cruel is the only way to retain our values.