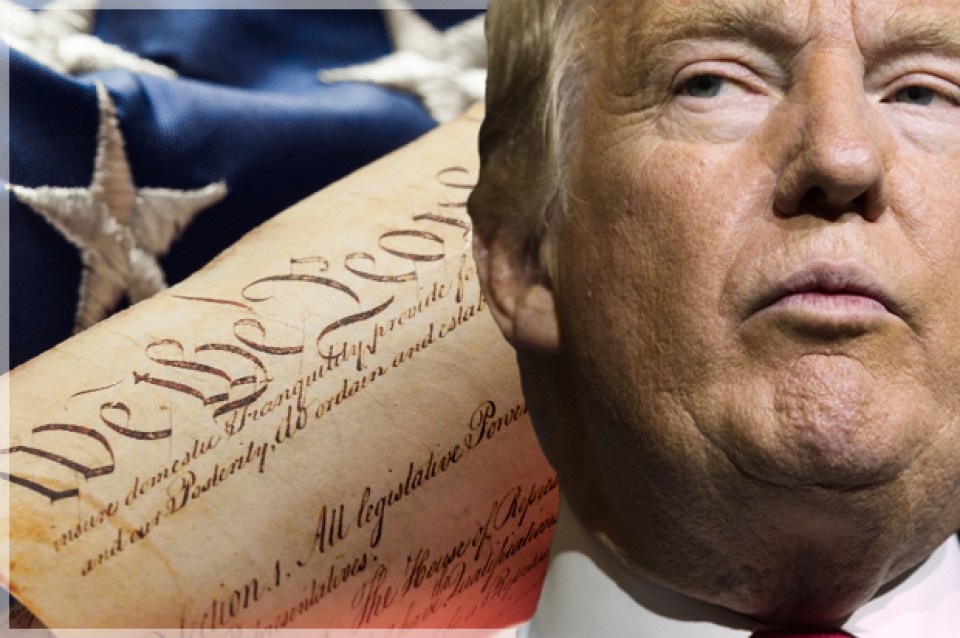 “The constitution is archaic. It really is a bad thing for this country.” That according to President Donald J Trump, or at least, that’s what I, and tens of millions of other Americans, were told by various media when we woke up this morning.

In my own case, I walked into the family room and my wife said, “You’re not going to believe this. Do you know what the president said the real problem with his first 100 days was? It’s the constitution. It’s archaic and it’s not good for the country.” Now, part of me was calm. I said, “Oh, more of the same. We should be getting used to that kind of stuff. It’s distressing, but hardly surprising at this point.”

But another part of me flipped out. I mean, “Holy crap! It’s one thing to talk obscenely about women, and to rattle on about things you have no intention of doing, or to make up facts that don’t exist, but there is something so fundamentally wrong with the President of the United States saying that the Constitution is getting in the way of his doing his job. That’s the stuff of which civil wars are made.” It felt to me like the ultimate statement of the kind of demagoguery we’ve been moving toward, and I flipped out.

In fact, having heard the news, my only thought was, “How am I going to talk about this outrage in a way that doesn’t just feed more outrage?”

Because, of course, we know from the best of social science that simply screaming at people, “This is crazy. This is exactly the kind of demagoguery that destroys great nations. We are all in danger, regardless of how we happen to feel about this particular president.” – That doesn’t work.

So, I thought to myself, “How will I talk about this reality in a way that doesn’t simply raise the alarms and defenses of the people who most need to think about this? How do I do it so they don’t just shut down and say, “You see, Brad’s just a Trump hater,” which I really don’t think I am. I’m not a supporter, but I don’t think I’m a hater.

How am I going to talk about this? Well, the first thing you should do, I’ve learned, is when things are looking a little bit weird or difficult, and there’s an ethical or a moral quandary, get more information. I set out about getting more information and going past the headlines, which I woke up to and which had upset me, and here’s the thing: President Trump didn’t say any of what those headlines announced! He simply didn’t say those outrageous things. Other things, maybe, but not that.

I had to take a minute and go, “Wow, I was most upset about what wasn’t said.” That is really dangerous for all of us, because it turns out that every single source that reported the President as having claimed that the Constitution was “archaic” and “not a good thing,” was actually playing the very dangerous game that this president ironically and tragically so often accuses news media of doing: selling fake news.

It’s really dangerous, and it’s particularly dangerous because it plays right into the narrative so often heard from the President and his supporters, about them being aggrieved and being misunderstood, and not just misunderstood, but misrepresented by people who claim to be responsible purveyors of information. Whether it was well intentioned outrage or simply peddling click bait, every single place that said the President called the constitution archaic, should be ashamed of themselves, and is actually doing something remarkably dangerous by playing a game that A, they cannot win and B, feeds into the worst of what they say they’re opposed to.

I get it. Politics is often a bare knuckled game, but there is something very strange about the people most opposed to the president’s fast and loose game with the facts getting faster and looser, simply because they think they’re in the moral and ethical right. It’s not a path to actually reaching out to and changing minds. It’s not a path toward improving the public culture. It is a path toward playing into the claims about fake news in the worst possible way, and maybe worst of all, it’s the kind of overreach that is, as is the case in so many parts of our lives, an example of reaching past the responsible and the attainable, for a quick hit of sanctimony.

During the same weekend that those things were not said by the President, the Chief of Staff, Reince Priebus, discussed quite openly, calmly and coolly, entertaining notions of rolling back, if not parts of the first amendment itself, certainly laws which protect journalists from questioning the President or other politicians with whom they disagree. That got almost no coverage at all! That’s why overreaching is not the way to go.

The fact of the matter is, even when those who did so, called Priebus out, they said he’s “challenging the First Amendment,” that’s not what he did. But what he did do was begin to use the West Wing and the office of the President to chip away at a culture which celebrates freedom of the press, one of the things that make this country great and which we all have to protect.

A free press, including the freedom of that press to say and do things that may not be popular with the powers that be, is not only necessary, but in everybody’s interests, even if they don’t love what is written or said about them. If for no other reason than the powers that be today, will be the people with no power tomorrow, and the ability to protect each other’s capacity to participate even when we’re not in power – well, that’s more durable than any president or any fight, and I hope that we can stay focused on that, because that’s a future path that we can all share. The other one, I don’t think so.