Can Martial Arts And Jewish Spirituality Go Hand In Hand? 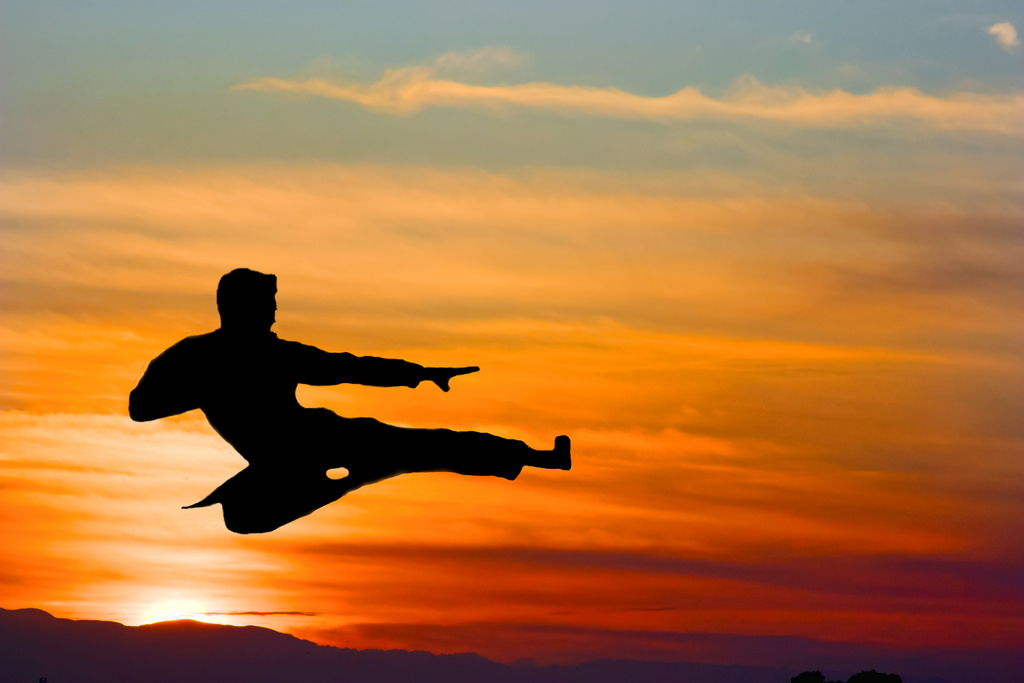 When thinking of various martial arts styles around the world, what comes to mind? Fighting techniques, exercise, fitness and physical discipline are typical. Does spirituality also play a role in learning and practicing martial arts such as judo, karate, tae Kwando, aikido, kung fu, muay thai and other forms of fighting that have Asian origins? If so, is this limited to forms of meditation (especially patterned after Zen Buddhism) or can this also be linked to monotheistic, religious spirituality?

Do Jewish people join martial arts classes to heighten their spirituality or merely to learn self defense moves? Broaden their religious understanding and fervor, or get in better physical shape? We could say without much analysis that the majority of people, especially Jews, who begin studying martial arts are more likely to start because someone bullied them and they want to learn how to fight back; or it seems like a fun way to exercise and toughen up; or they admire the exotic techniques and assume they are more graceful than boxing; or they saw a few Bruce Lee or Jet Li films at some point and want to emulate these fighting stars.

But do some people actually study martial arts with a goal of tapping into spirituality? Perhaps this is not so much a motivation at the beginning of one’s martial arts career, but it may become a by-product. It may even take an important role for a few individuals.

I have pondered this topic at times for many years. I began studying karate at a local dojo (school) when I was 13 ½, because a junior high classmate sometimes kicked and threatened me. I joined a class held in the gym of my synagogue. Eventually I earned my first-degree black belt, shodan, and even went on to teach a girls’ class as a purple-belt college student. Today I practice at home, occasionally taking class at another local synagogue, and I teach one-on-one lessons to an Orthodox Jewish woman in her home.

My reasons for continuing karate study modified over time. The classmate stopped bullying me once I punched her in front of the class, but I kept with it more for the exercise and sense of achievement. And occasionally in class or during practice, especially when I tried my hand at meditation or specific techniques, I did feel a rush of energy, and sometimes it seemed like a spiritual, beyond-words experience. Did other students notice this as well? Did other Jewish martial artists notice this as well?

We realize there can be multiple paths to experiencing spirituality, and actually defining spirituality is far from an easy task. Add in the construct of “Jewish spirituality” and this can seem an even more ephemeral subject. Yet for a few Jewish martial artists, there is a link–or the spirituality they experience seems to be in definite contrast to what they may experience in formalized Jewish settings.

The roots of martial artistry can be seen as quite old and even have Jewish origins, not just East Asian. When Jacob wrestled with the angel in Beresheit, it was more than a fistfight; there was a spiritual element in that he asked for a blessing from his opponent (Chapter 32, Parshat Vayishlach). Jewish scripture relates the military maneuvers of our kings, but the most enlightened fighting analysis can be accredited to King David. Starting with his youthful precision slingshot, as an adult he offered sophisticated insight into the mindset of a warrior:

Psalm 18, line 35: Who trained my hands for battle so that a steel bow could be bent by my arms.

Psalm 144, line 1: Blessed is HaShem, my Rock, who trains my hands for battle, my fingers for war.

Another central aspect of Eastern martial arts styles is the concept of “chi” or “qi”, the energy, force which in Hebrew would best be described as ruach. On the Ohr Somayach educational website, a rabbi dealt with this by explaining that

“The idea there can exist such a force as you have described (chi/qi) is not inconsistent with mainstream Jewish belief, as long as you believe that this force, like all forces, is created by and controlled by G-d. Perhaps the analogous concept is ‘Ruach Elokim,’ a divine ‘wind’ or spirit, which gives a person extra-human powers, strengths and abilities. This is the power to which the Bible attributes Samson’s source of strength.”

“This Qi that the Chinese speak of correlates almost identically to what traditional Jewish sources refer to as the Nefesh level of soul within the body.”

Jews and martial arts have occasionally been covered in the news media, and with careful reading we can go beyond the “novelty” of Jews throwing punches and kicks, to measured analysis of the overlap of Eastern martial arts and Jewish spirituality. “From Dojo to the bimah, martial arts meet Judaism,” a 2001 article from the Jewish News of Northern California, discusses how “Bay Area (CA) Jews from across the spectrum are discovering that martial arts training strengthens them physically but can also enhance their spirituality.”

One practitioner mentions that “The reflection, preparation and preliminary thinking utilized in martial arts all really come from the ethical code of the Torah.” This could be debated, certainly. But there are Jews who are searching to bridge their religious practice with their aikido or karate lessons and the underlying principles.

At least one American rabbi penned a book about connecting his religious work to his martial arts study. In “Kinesthetic Kabbalah: Spiritual Practices from Martial Arts and Jewish Mysticism,” Rabbi Daniel Kohn draws “parallels between the ancient Jewish mystical teachings of Kabbalah and Eastern philosophy as manifested in aikido… two vastly different traditions” yet they have similarities and can even build upon one another for those who think it out with purpose.

I asked around for thoughts from practitioners on a martial arts- spirituality connection. However, I sensed reluctance or puzzlement about this topic among some people I knew who study martial arts. (Is it too personal for some?) Here is commentary from a few current and inactive martial artists.

A has studied martial arts since he was a teenager in New York City. He is in his 50’s and still active in his style:

“Is it the martial arts that foster spirituality, or vice versa? I have thought about that.

I’ve seen my feelings about this fluctuate over time. I started with it as self defense only, as a discipline like martial training, to develop my internal fortitude. Then I started seeing a connection between martial arts training and spirituality especially because of what a senior instructor in my style was talking about.

What is spirituality but a continuing process, a derech, a path. For me it was metaphysical, doing martial arts and feeling energy from a kata (form), feeling connected to the universe, its forces and energies. But could it also spring from other athletics, or art, music, virtuosity? To me, any practice of art or a discipline, when you employ your intellect, senses and delve into experiences beyond the everyday, can attribute to more spiritual connection. It’s a tuning-in process. It could be with prayer, martial arts, yoga, and so on. And it’s also about focus.

Martial arts and spirituality also link because of manipulating the energy around you. Training, and chi and belief and relaxing and energy flow add up. Martial arts are a vehicle for exploring this. Grappling and rolling on the ground to fight, that is not an art. Art, martial arts, has to have finesse. Martial arts include training, mediation, examining what you do. It’s not just ‘last person standing.'”

B studied karate for a few years as an adolescent, but then quit. He took up running some years later, and ran 3 complete New York City Marathons, as well as many 5K races. He recalls his experiences with martial arts:

“I was more concerned with getting the moves right than anything else.”(such as spirituality) “Running, on the other hand, is where I feel most spiritual, meditative and most of all relaxed.”

D and I attended the same junior high school. He trains in Aikido as well as in Daito Ryu Aikijujitsu and is a nidan (2nd degree black belt).

“Aikido is a deeply spiritual art, though some schools/dojos embrace this aspect more than others. Part of its spirituality is derived from an esoteric branch of Shinto which the founder studied. More straightforward is the fact that at its core aikido is about recognizing the potential for universal unity.

I started studying aikido about the same time as we joined a large Reform temple in Seattle. The dojo has been much more the home of my spiritual community than the temple.”

N was a student of mine at a New York City public school. He works part-time as a Christian youth preacher and is interested in Jewish studies. (We have discussed in depth various Judaic topics and he studies on his own as well.) He had  comments that I felt tied into this topic:

“Eastern martial arts are steeped in philosophical ideas and rules. Many times it does induce one to search the spiritual. Personally have I ever felt a spiritual experience? Yes, but it didn’t come from the martial art itself as if a certain martial art is God’s special connection… the martial art style in question can be the means to open up thought and reflection to God. As martial artists we walk the razor blade line between discipline and savagery… we must always keep our pride in check.

I myself have thought on why I train…and I often reflect on warriors of the past like David and Joshua and how they were men of the sword but (also) men of God. So yes, I have gotten ‘spiritual experiences’ but nothing like a psychedelic trip. Just thought that makes me realize certain struggles within myself and I take these things to prayer.”

These men voiced a variety of opinions on the subject, yet there are a few basic ideas they touch upon. It is not a fluke thing to them, to see ties between martial arts or other demanding sports and spirituality.

There are a number of Jews who practice martial arts, and at least some of them see (or seek) a link between spirituality, Jewish spirituality and the martial arts themselves. This connection can grow strong or diffused, depending upon the participant’s stage in life, interests and other factors.

This article is but a brief examination of this topic. As more Jews, of varying observance levels, study martial arts perhaps more will delve into the discussion of overlapping spirituality.