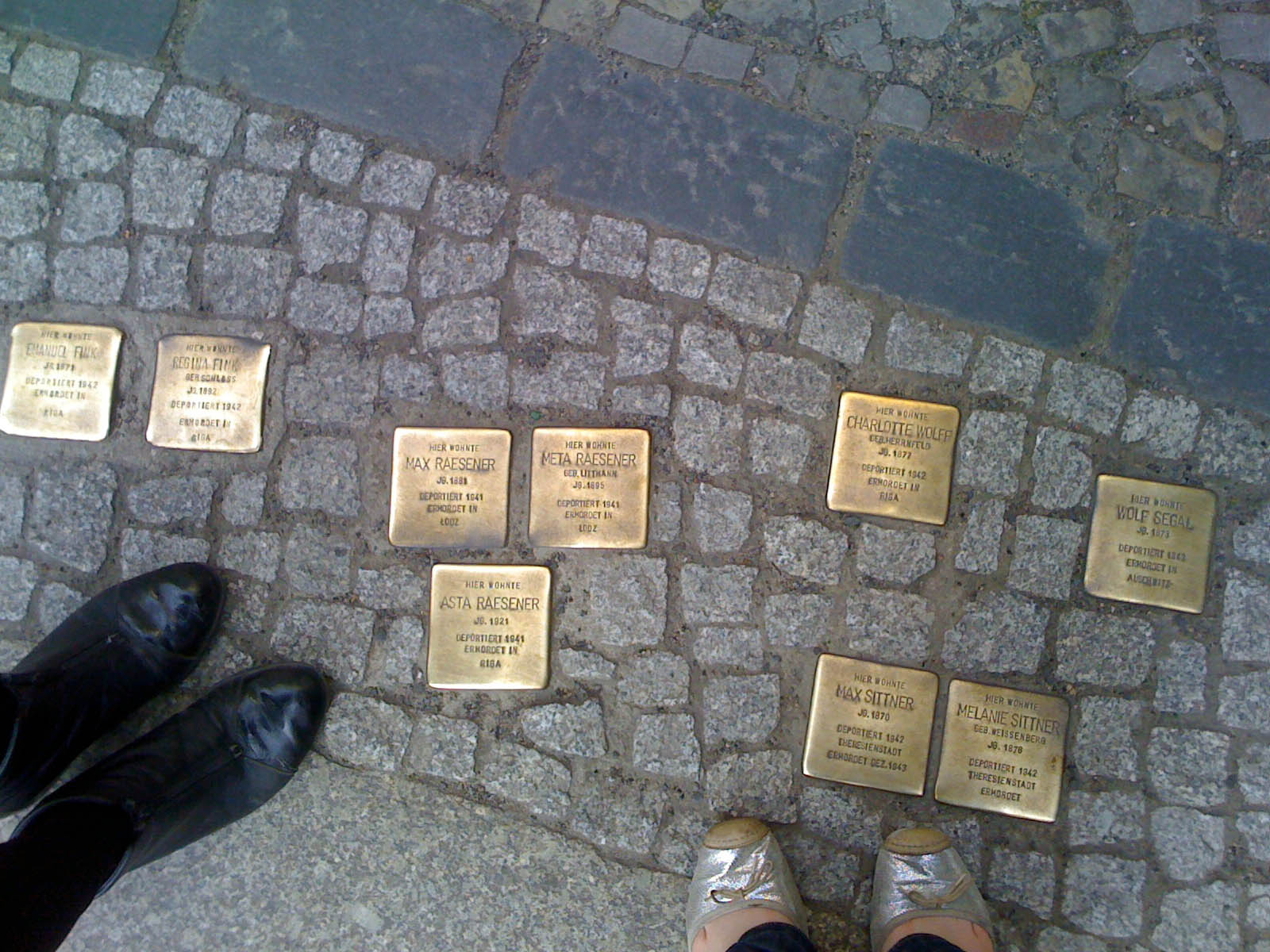 I have often pondered how we can possibly give voice to the enormity of our people’s loss.  Six million Jews were murdered.  Of that, 1.5 million were children.  Centers of Jewish learning were destroyed.  Entire villages, and towns were decimated.  Prior to the war, the Jewish population of Poland was the largest in Europe, with approximately three million.  9.5 million Jews lived throughout Europe.

I realize once again that two thirds of Europe’s Jews were murdered.  It is impossible to comprehend the magnitude of the loss.  These numbers are staggering.  How can we take to heart the Holocaust’s devastation?  These are numbers that intoned each and every year.  They do not convey the human costs.

On two occasions in recent years I traveled to Europe.  The first trip was to visit Budapest, Vienna, Salzburg and Prague with my wife Susie and children Shira and Ari.  And the second was this past summer’s trip to Amsterdam.  Throughout these cities, one can find small bronze plaques, no more than a few inches on each side, neatly tucked into the pavement of streets.  We encountered them as we walked the streets of these European cities.

On them is written a name, the date of the person’s birth and the date of their deportation.  On every plaque are the words, “Here lived.”  These can be found in 600 cities and towns throughout Europe.  So far, 27,000 have been neatly placed into the pavement.  All of this is the ongoing project of the German artist, Gunter Demnig.  It is called, “Stumble Stones.”  And although 27,000 names are a mere fraction of the millions murdered, this conveyed to me the enormity of the loss more than all the books I have read or the many museums I have visited.

Here we were: the four Moskowitz’s gallivanting throughout Europe, taking in the sites, discussing where we might eat dinner or what activity we might do next, stopping here to take a selfie and there to take family photos, joking with each other or arguing about religion and politics, when all of sudden I realized that I was standing on four such stones.

I look up at the apartment building that looks like all of the other apartment buildings in Vienna and I realize that here lived another family of four.  Scattered throughout these cities and towns in which we were playing, so many others lived.  My people once roamed these streets as I now did.  As far as the eye could see, Jews lived in these houses.  They lived where I now stood.  They were part of the fabric of Vienna, Salzburg, Prague, Budapest and Amsterdam.  They thought themselves Austrian.  They saw themselves as Hungarian.  They loved being Dutch.  Others saw them only as Jews.  The Nazis, and their collaborators, viewed them as enemies.

The artist fashioned something that struck me like no other memorial ever has.  Throughout Europe, it is possible to stumble upon the places we once called home.  It is also, of course, possible to race over these small memorials, to walk over them as if these people longer lived there.  And I have no doubt that I did not notice every single stone whose path I crossed.  But these four caught my eye.  For a moment I stopped, and paused, and contemplated.

It is these names that transform our remembrances.  We cannot comprehend the millions.  We can remember one name, and one life.

A few weeks ago, Johan van Hulst died at the age of 107.  He is among the righteous gentiles who saved Jews during the Holocaust.  Johan is credited with saving 600 children in Amsterdam.  Among those children was my friend’s father who, like so many others, was one day secreted out of the school that Johan ran in order to live with a Christian family somewhere in the Dutch countryside.  He would never see his parents again.  Johan is haunted by those children he could not save.  He said, “You realize that you cannot possibly take all the children with you.  You know for a fact that the children you leave behind are going to die. I took 12 with me [on one day].  Later on, I asked myself, ‘Why not 13?'”

I have often thought about this and the coincidences, or perhaps we should say, miracles, that bring people together, the serendipitous moments that create friendships where none existed before.  If not for the heroism of this man, who I, of course, never met, my friend would not have been given life.  She would not have met her husband and raised her three children.  She would not have done the myriad of things she has accomplished, the many organizations to which she has devoted countless hours and the innumerable lives she has graced.  She would not have touched our very own city in ways that our city is unaware.

She would not have entered my life.  My life would most certainly be poorer if we had not become friends.  But I, of course, would not have known this.  I would stumble through my happy existence, singing and dancing all the same, not even aware of this loss.  I would be blissfully unaware of this missing fragment I did not know.  I would never know about this thread that now mysteriously connects me to the streets of Amsterdam.

Sometime around the year 1940, Johan saved what he thought was one solitary child.  How many times can that act be multiplied?  How many ways can that be expanded?  Those 600 people made for themselves lives.  They built families.  These numbers turned into thousands and thousands of other people.  And those thousands turned into tens of thousands of interactions like my own.   His heroism reaches to this place, and to this moment, here and now.

Our lives are touched by one person.

I pray.  May we continue to stumble along.  Perhaps we might discover more and more names.

Did God Intervene To Find A Family For A Baby With Down Syndrome?

Did God Send Me The Answer To My Prayer Via Boat?

A Message To My Fellow Clergy About The Little Things