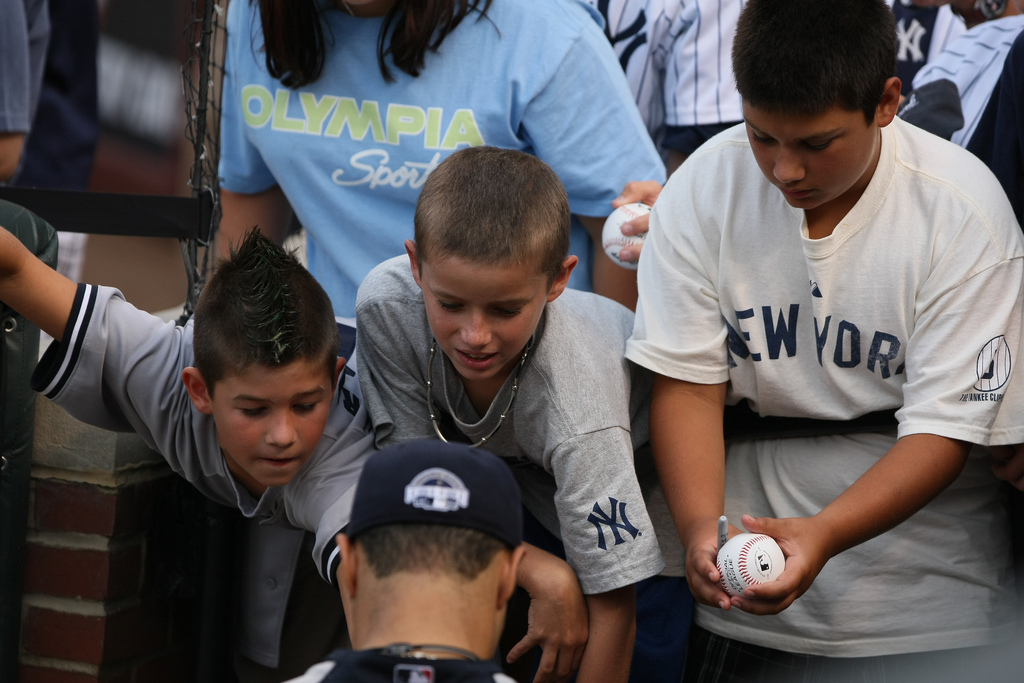 On July 4th, I took my kids to their first Yankee game. I’ve been a fan since I was 7. My kids are almost four and two, so I was thrilled that they had a blast at the game, since I hope they’ll be lifelong fans.

Every morning, I tell them the outcome of the game, and often fill them in on the Red Sox, too, since they are in a tight battle for first place. When the Yankees lost the other day, my daughter pouted and said, “I’m so sad they lost!” I had to smile, since it meant she was starting to get invested, but it also got me thinking about how to teach about, not only winning and losing, but also “us” and “them.” After all, when you go to Yankee Stadium, you hear more than just, “Let’s go Yankees!” You’ll also hear “Red Sox suck!” So how could I teach my kids to be a proud member of “us” without denigrating “them?”

Robert Sapolsky is a psychologist and is the author of the new book Behave: The Biology of Humans at Our Best and Worst. He recently wrote an article in Nautilus entitled “Why Your Brain Hates Other People, and reminds us that we automatically divide the world into an “us/them” mentality:

Humans universally make Us/Them dichotomies along lines of race, ethnicity, gender, language group, religion, age, socioeconomic status, and so on. And it’s not a pretty picture. We do so with remarkable speed and neurobiological efficiency; have complex taxonomies and classifications of ways in which we denigrate Thems; do so with a versatility that ranges from the minutest of microaggression to bloodbaths of savagery; and regularly decide what is inferior about Them based on pure emotion, followed by primitive rationalizations that we mistake for rationality. Pretty depressing.

We might think that in order to create a more just world, we should try to overcome this “us/them” mentality. But it’s so ingrained in our evolutionary history that this task would be impossible.

Instead, there’s a trick we should use. We are have our own particular constellations of things we like, groups we affiliate with, and places we come from. So given the range of identities we are part of, we can actually transform a “them” into an “us” fairly easily. As Sapolsky notes, “[W]e all carry multiple Us/Them divisions in our heads. A Them in one case can be an Us in another, and it can only take an instant for that identity to flip.”

I certainly felt this happen to me when I was living in Boston on 9/11. That whole summer, it was hard to be a Yankees fan in Red Sox territory. But in the fall, as we felt a connection of being “Americans,” I got smiles from the T conductors when I wore my Yankees jacket. Similarly, when the Boston Marathon bombing happened four years ago, Yankee fans held up signs saying “Boston Strong.”

Indeed, the Fourth of July is a wonderful celebration to remind us that even as we bicker and argue over politics, and try to advance what we think are “American values,” what really brings us together is everyone going “Oooooh” when we see fireworks.

So if we want to move beyond our inherent “us/them” mentality, the easiest way is to find points of commonality, especially ones that are easy to discover and are even superficial — such as liking the same music, reading the same books, having kids the same age, belonging to the same religious community, or living in the same location. If we spend just a few moments, we can easily find ways to transform a “them” into an “us.”