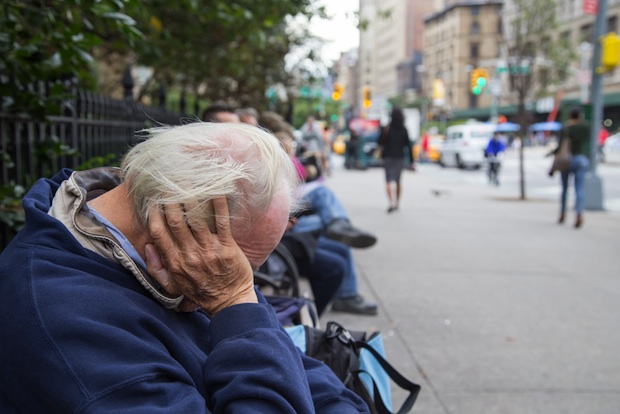 How could it be that, in this richest country at the richest time in human history, some 49 million Americans are hungry, including 33 million adults and 16 million children?

In New York City alone, 1.4 million – disproportionately represented by women and children, the working poor, the elderly and disabled – rely on soup kitchens and food pantries to meet their basic food needs. How could that be? And how could we – as caring human beings – have allowed ourselves to become immune to the suffering of so many?

I’m as guilty as the next guy, reflexively averting my eyes when I pass a homeless, destitute person on the street while I take inventory of the moral failures that give me an excuse to turn away. He’s an alcoholic or a drug abuser – bad choices that have put him here. She’s not really hungry – just hustling. Or, he won’t use the money for food – he’ll just buy booze and smokes. (By the way, if that last one keeps you from helping, try carrying around a few fast-food gift coupons.)

No small number of homeless folks, more than we care to admit, are people not so different from us who have come upon hard times.

I recently completed a dozen years leading an advocacy organization working for Mideast peace and reconciliation. In fact, most of my professional career has been dedicated to institutional work with an emphasis on sustainable, scalable reforms rather than on individual helping services. Working at the wholesale level, rather than retail, has always made more sense to me — repairing broken systems as the path to healing broken lives.

But as I take a time-out between jobs, to clear my head and figure out what’s next, I’ve committed to adding regular, weekly service volunteering to my personal plan. After trying out a number of volunteer options, I found my home at an impressive East Harlem nonprofit called New York Common Pantry, dedicated to reducing hunger while promoting dignity and self-sufficiency; one of many thousands such organizations working around the country.

For the past decade, I’ve worked on behalf of the “other” – the excluded and neglected – half a world away. Now I find myself engaged with the “other” who I pass every day on the street. And I’ve learned a few things along the way.

On the other hand, I’ve learned some equally important lessons about what’s possible:

There can be no easy fix for narrowing the growing divide between rich and poor in America. Individuals helping individuals – as important to the receiver as it is gratifying to the giver – is not going to entirely solve the massive challenges of poverty, hunger, mental illness, homelessness and addiction that require policy reform, political and moral courage, and increased public spending. Raising the minimum wage, investing in job and infrastructure creation, rebalancing the tax burden, and establishing medical and mental health care, quality education and job training as basic American rights rather than privileges will all be required to address the root causes of poverty and hunger.

Meanwhile, though, spending a few hours each month helping people less fortunate than ourselves, wherever we may be on the socio-economic spectrum, is the least we can do. To briefly step outside our lives of privilege and re-sensitize ourselves to those around us. To raise our averted eyes and confront the poverty and hunger in our midst, while we recharge our own humanity and fulfill our moral and civic obligations.

Do it, and tell your stories to friends, coworkers and family. And then translate your ground-level experiences into social and political advocacy. Because only through a combination of both “bottom-up” and “top-down” action can we begin to live up to our responsibilities, and to America’s promise.

This post was originally published on the author’s blog, ‘On My Mind…Off My Chest‘

Ami Nahshon recently completed nearly 12 years as International President and CEO of The Abraham Fund Initiatives where he built the organization into the leading advocate for a shared and inclusive Israeli society for Jews and Palestinian-Arabs alike. Ami is a founding member of Foundations for Peace, an international network of NGOs working in divided societies around the globe, and of The Alliance for Middle East Peace, a US-based coalition of more than 85 non-profit organizations working for peace and coexistence in Israel and the Middle East. In 2006 he was named International Non-Profit Executive of the Year by the Executive Council of New York, and has been recognized by Foreign Policy Magazine on their ?Twitterati 100? list of influential international affairs commentators.