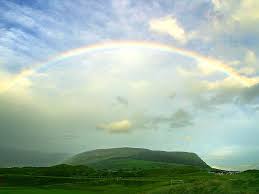 The Covenant between God and Noah, as a representative of humanity, is often seen as a beacon of hope and a universal connection between the Divine and human beings. After the great flood, which destroyed most life, God rebuilds with the promise never to destroy the earth through a great flood again.

Yet as with so much of Torah, and so much of life, it is not so simple. Our sages dare to ask what a rainbow really symbolizes, and in so doing unearth important truths: a vow is stronger than hope, and a rainbow does exist in absence of rain.

The Babylonian Talmud (Tractate Ketubot 77b) relates a story about two righteous rabbis meeting in paradise. One asks the other if he had ever seen a rainbow and then suggests that “during lifetimes of completely righteous people no rainbows are visible,” since they suggest that God is adhering to the covenant, even if the world merits another flood.

Genesis Rabbah similar affirms that “there will be some generations which will require no sign since they were completely righteous,” while others will need a rainbow to affirm the covenant between God and humanity.

Rainbows are not merely a natural wonder or promise of sunshine, but a warning of abundant wrongdoing and the gathering of societal storm clouds. They also rally the righteous. When it is raining villainy, the rainbow brings with it the promise that the world will go on and that the righteous are not alone in their travails.

Even when there is no end to the rain in sight, and no bow to be seen on the horizon, God’s vow not to destroy the world in a flood still carries symbolic light. The rainbow but also rallies humanity in defense of a pact born of righteousness. It is not a symbol of ephemeral hope, but of deep faith in the future and belief that humanity has rebuilt before – and can do so again.

In our own time of social malaise and strife, the rainbow affirms that with enough light, even the gloomiest of times can summon beauty and purpose. May we soon see one burst forth from behind the clouds.