Is Violence Ever Okay? 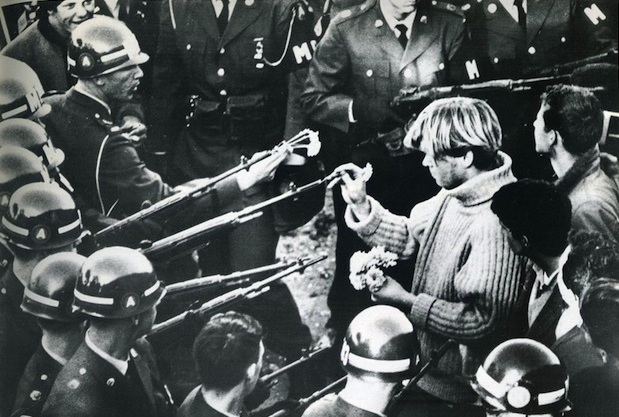 Generally speaking, I abhor violence. I’d like to think that if I was an adult back in 1967, I would have joined the Flower Power movement and stuck flowers in the rifles of national guardsmen at the National Mall as a protest of war. For as long as I can remember, I have trusted the wisdom which teaches that one should not meet violence with violence. We should “turn the other cheek.” Nevertheless, a few weeks ago I found myself so taken with a story shared with me where unnecessary violence seemed so satisfying. It made me wonder, “Why?”

The story was about a man named John “Kick Ass” Schwartz, who passed away in his 80s. For 40 years, he’d been signing his name “Kick Ass” – and it may very well soon be engraved that way on his headstone.

“Well,” she said, “we were out with our granddaughter at a restaurant that had a buffet. When I returned to our table, there was a man sitting in our seats. I told him, ‘We were sitting here.’ But he replied with a vulgarity: ‘No you weren’t, c**t.'”

She continued, “Shaking, I went back to the buffet and told John what had just happened. John came to the table and asked the man, ‘What did you say to her?’ And as the man stood up, John punched him in the face.”

I found that story to be so satisfying. But what about peace and love? And, what about turning the other cheek? For several weeks since speaking with John’s widow, I’ve been puzzling through the criteria for “justified” violence. So far, I’ve only come up with two:

Upon reflection, I hear echoes of the above in the original dictum “an eye for an eye.” But what of the peacenik response to that: “An eye for an eye, and the whole world goes blind”? Can I really say that John’s punch was necessary or equal to the other man’s crude name-calling? I don’t think so.

Nonetheless, every time I think through the story, I find myself smiling at the result. Why? In the end, I believe there’s simply something tribal within us. In entrusting me with their sacred stories, John and his widow had become part of my clan, and in so doing, their safety and care seems to speak less to my calculated reasoning of right or wrong, but to my gut. And my gut said, “Kick ass.”