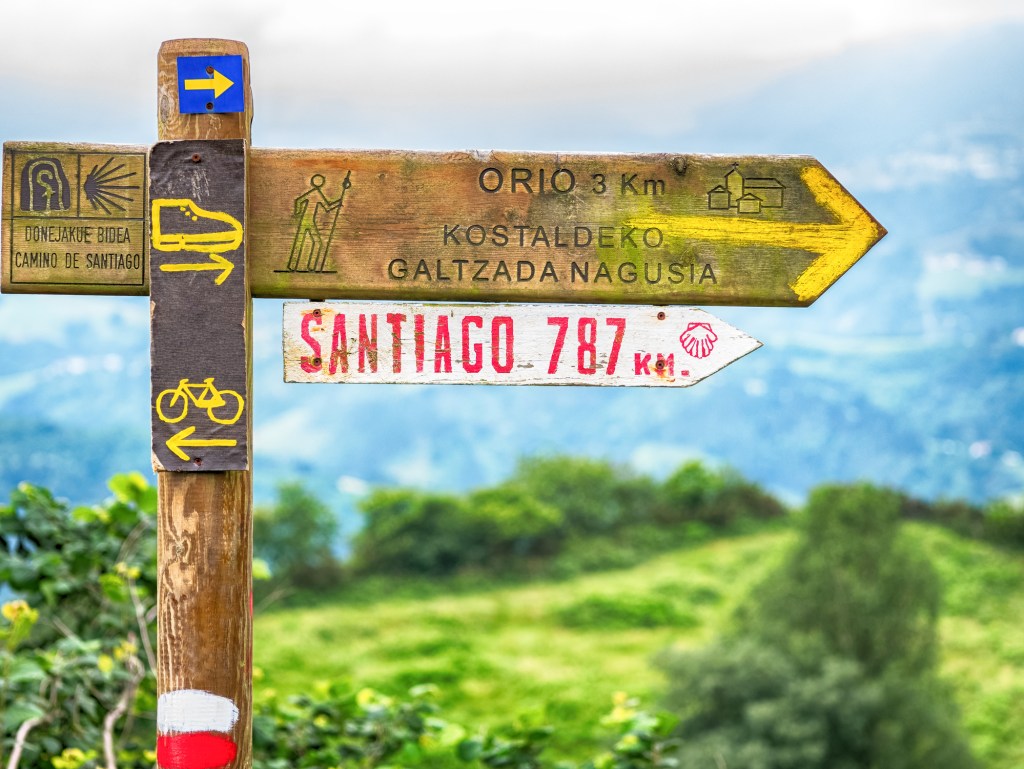 Standing in the busy Pilgrim’s Office in Santiago de Compostela, I was presented with three options: religious, spiritual, and sport. I had just finished walking 799 kilometers from St. Jean Pied de Port, France to Santiago de Compostela, Spain, following the Camino Francés or French Way of the Camino de Santiago. Now, I had to select my reason for walking the ancient pilgrimage in order to receive my Compostela, a certificate of completion.

So what was my answer?

Historically, the Camino de Santiago was made of Christians setting out on a pilgrimage to the shrine of Saint James in the Cathedral of Santiago de Compostela from all across Europe. Nowadays, you’ll still cross paths with believers along the walk, but many others have embarked on the trek for reasons unrelated to religion. Some are taking advantage of a period of transition in their lives, maybe graduation or retirement, to reflect and enjoy before the next chapter unfolds. Others are in search of answers and peace after experiencing a weighty life event, like a divorce or the loss of a loved one. Then, there are plenty who simply thought it sounded like a fun challenge to hike for a month (or in some cases, even longer).

As a non-religious person, it certainly wasn’t faith that drew me to the Camino. I had just quit my job in Texas and finalized plans to move to New Zealand for a year. I figured if I was going to leave behind my regular working life for a bit, then I might as well take advantage of this rare period of freedom to do the Camino too, an idea which had been brewing in my mind after meeting a Swiss woman who couldn’t speak highly enough about the experience.

I didn’t allow myself to have any expectations. Sure, I had heard many stories of pilgrims (what people who do the Camino are called, regardless of religion) having life-changing revelations. But what I didn’t want was to take every step, waiting in anticipation for some dramatic epiphany instead of enjoying the present.

Along the actual way, however, it’s hard to avoid feeling at least some buildup, particularly for certain locations that have become “hotspots” (for lack of a better word) for intense spiritual experiences.

The Cruz de Ferro, or Iron Cross, is one such place. Located between Astorga and Ponferrada, it’s a simple iron cross on top of a tall pole on a mound of rocks. The tradition there is for pilgrims to bring a stone of their own from home to leave on the mound as a way to symbolically and spiritually unburden themselves. Because of this ritual, it’s a much-anticipated landmark and one of the most memorable moments for many on the Camino de Santiago.

The day I was set to see the Cruz de Ferro, I woke up early with my friend Dina, an Israeli girl who I had met along the way, so we could arrive at the cross at sunrise. Despite myself, I felt a stirring of anticipation for the moment after hearing so much from previous research and talk from other pilgrims.

We ended up arriving early, as the sky was turning from a dark grey to a dull blue, and circled around the cross’s mound in silence. As the day got slightly lighter, more and more people began to arrive–and I felt nothing.

I slowed my pace and took longer-than-normal glances at the rocks around my feet and at the cross in the sky. Maybe subconsciously, I felt that if I let myself linger in the moment longer, something would eventually flicker inside me. When it became clear that wasn’t going to happen, I gently placed the smooth, black, oval stone I had brought from my parents’ backyard on top of some other rocks and then saw if Dina was ready to go.

While walking onward, Dina and I shared our similar sentiments of feeling unmoved until we stopped at a bend in the path, high up in the mountains. We were alone and the sky was now a sweet, light blue topped with peach-colored clouds that were making way for a soft, yellow sun creeping over the horizon. It was beautiful. It was moving. It was everything my time at the Iron Cross was not.

We let the sun’s golden rays warm our faces. As two people who had been strangers a couple of weeks ago and now formed a lifelong friendship, we couldn’t control our smiles as we laughed about how this, this was something spiritual.

When we reached Santiago de Compostela some days later, we felt a similar moment of “spiritual disappointment” like at the cross. This was it. The finish line we had been walking towards for hours every day for weeks. We walked into the large square in front of the cathedral, surrounded by many joyful reunions and tearful faces of pilgrims. We appreciated the beauty of the cathedral’s architecture and the sense of achievement at having made it, but we couldn’t produce emotions more powerful than that.

Later on, I attended a crowded Pilgrim Mass in the cathedral, as it seemed like the appropriate thing to do, but I felt like a detached tourist there to observe the history of the place, rather than someone communing in a meaningful spiritual gathering. My divine moment was coming though.

Upon reaching Santiago de Compostela, pilgrims have the option to continue walking three or four more days to reach Finisterre, a small town situated on Spain’s western coast. I couldn’t resist the idea of walking to a place known as “the end of the world” and knew I’d be doing this extra section.

At this point, I was walking with Francí, a Spanish guy I had formed a close emotional connection with. Caught up in another one of our many meaningful conversations, we paused mid-sentence when we crested a hill and were suddenly confronted by the sight of the slate blue ocean dominating the horizon. This first glimpse of the water sent chills through my body, and we clutched each other’s hands. Mountains and forests and fields had finally delivered us to the sea. It was poignant to be confronted with the reality of just how far my own two feet had taken me, and especially touching because I was sharing such an experience with someone I deeply cared about in a way I couldn’t have expected. To me, this was spirituality.

Looking back on my Camino, I may not see profound experiences at any of the many religious landmarks and attractions dotted along the way like others may. What I do see are unspoiled moments surrounded by the awesome and quiet beauty of nature. I see hours spent connecting with beautiful, diverse souls. And I see plenty of reasons for why I chose what I did that day at the Pilgrim’s Office: spiritual.

Cindy Brzostowski is a freelance writer and editor based in Berlin. Her work has been featured in Time Out, CultureMap, Livability, and more. When not writing, reading, or eating, you can probably find her making an itinerary for her next adventure or dreaming about pizza. See more of her work at www.cindybrz.com.