Fear, ISIS and the American Way: A Refugee’s Reflections on 35 Years in the United States 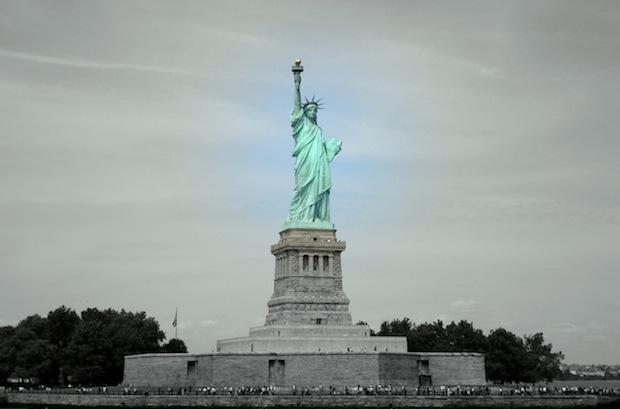 Fear is an odd thing. A fearful instinct telegraphs an imminent danger to you, allowing you to be alert and protective. Fear in the wake of national tragedy or an act of terrorism is a common response. What we do with such fear in the wake of ISIS attacks and threats will reflect the best or the worst of our humanity, values, and character. For many Americans it also a spiritual question about the soul of what makes us American.

My life took an unexpected turn in 1980. I was hurriedly sent from my home in Cape Town, South Africa to the United States of America to avoid being imprisoned for refusing to be conscripted to a military that was used against its own citizens. Staff of the United States embassy helped to facilitate documents being sent to New York via diplomatic pouches.

I landed at JFK on the morning of December 6, 1980 filled with expectation and fear about being a foreigner in a new country and culture.

I felt like a homeless person without a country or family around me while simultaneously feeling elated to be in the country whose liberty, democracy and commitment to human rights I admired.

My circumstances did not meet the legal criteria for refugee status and I was not eligible to be an exile although that is what I was. After being met at JFK by Jean-Claude, a Haitian-American man, holding a sign with my name on it I was driven to an apartment on New York’s Upper West Side where I would spend my first nights in America.

After unpacking my life’s belongings from one suitcase my host lent me a jacket and tie to wear for our lunch appointment. We then walked to lunch through Central Park and down Fifth Avenue. Seeing such a diverse mix of humanity moving freely as they jostled for room on the sidewalk was as remarkable to me as the smell of roasted chestnuts sold by street vendors.

At our destination, a private club with an eerie hallowed silence about it, the pastor of a large Upper East Side church stunned me by embracing me as if I were a member of his family.

Over lunch he outlined the graduate schools where I would be interviewing and the congregants whose apartments I would stay in for the coming month, including living with his own family.

His congregation would sponsor and support me though three years of graduate work.

My fears of a foreign country and culture ebbed as I marveled at the directness and generosity of being warmly welcomed as a stranger with housing, education and financial support. This was extraordinary hospitality given not just to me but to scores of others by this same congregation.

I thought to myself, “So this is what Americans are really like” as I offered prayers of thankfulness and gratitude. I was not a homeless exile.

On my second day in America my host took me to a Spanish speaking church in Spanish Harlem where the congregation graciously embraced his flawed use of their language. It was a lively, spirited place reminding me of black churches I knew in South Africa. From there we went to a carol service with an ornate and beautiful cr?che scene on prominent display. As I sang this phrase of a hymn about the promise to “rescue Israel that mourns in lonely exile here” I lost it.

I fell to my knees in the candlelit church as the tears flowed. The words of the hymn were an unexpected trigger. I was in exile here, unable to return home without being imprisoned; I was mourning my family and wondering when I would see them again, or if ever. The enormity of my dislocation and journey to America hit me anew.

As I raised my head I could see hundreds of small candles flickering in the darkness. The people holding the flickering candles in the midst of darkness reminded me that my fears, while real, presented me with a choice. I was safe in a new home and lonely exile was also a choice and not a given. Those who welcomed me had not chosen to fear or demean me. Why should I give power to fear?

After the carol service I lingered at the cr?che scene where the baby Jesus figure would be placed in the empty manger on Christmas Eve. And then it dawned on me, he and his family were like refugees and immigrants on the run, strangers in their own land having to obey the whims of an occupying power.

That night I lay awake wondering what drove Francis of Assisi, so many centuries ago, to create the first ever manger scene. This touching scene now commonly found on front lawns, living rooms and churches was not well received by the religious authorities of the time.

Francis had done the unthinkable by dislodging the Omnipotent God to make room for a vulnerable God born, not into a regal palace, but into a homeless immigrant family in a place used to feed animals. It was an affront to the theology, power and presumptions of religious leaders matched only by their umbrage at Francis travelling to North Africa to meet and get to know Muslim leaders so vilified by the Crusaders.

I went to sleep grateful for Francis, for the manger scene, for a day of rich contrasts and for the Americans who had welcomed me as one of their own; and for the light of candles illuminating fear for its perniciousness.

Lady Liberty and sounds of sirens and violence marked my third day in America. The inscription on the Statue of Liberty welcoming the huddled masses yearning to be free applied not only to the tens of millions who had come to America but also to me.

It gave me pause to think of myself as the “wretched refuse of your teeming shore” alongside Lady Liberty’s promise that “I lift my lamp beside the golden door.” I would have been in prison back home if such values were not part of the American way.

That evening I was returning to the apartment after a walk though Manhattan’s Upper West Side. It was December 8, 1980 and from every direction I could hear sirens getting closer and closer. I suddenly felt afraid in my new home town and so I hurried home where I discovered that John Lennon had been murdered a few blocks away.

In the days that followed, candlelight vigils were held as much in memory of John Lennon as they were a cathartic response of New Yorkers to a city then bedeviled by crime and fear.

The candlelight seemed to boldly declare that fear only wins when we allow it to; when the fear of fear itself derails our humanity.

The America that I had come to was a place of hope in which values of liberty, freedom and equality would never be extinguished.

My life as an American has been shaped by the generations of refugees, immigrants, slaves and exiles who have in each generation reimagined what it means to “Give me your tired, your poor, your huddled masses, yearning to breathe free.”

My life, like that of so many newcomers to America has been shaped by the generosity of ordinary Americans, community groups, houses of worship and educational institutions welcoming the stranger.

Our values, character and way of life are at stake. Will the fear that ISIS intentionally spreads cause us to dim the light on what makes us uniquely American as a nation of immigrants, exiles and refugees? Or will we vanquish the fear as we join Lady Liberty in continuing to lift our lamp beside the golden door?

This article originally appeared on foxnews.com

Robert V. Taylor is President of the Desmond Tutu Peace Foundation in New York. He is a speaker and author of "A New Way to Be Human" (New Page Books). He lives in Seattle and rural Eastern Washington State.