Take Your Next Steps at Your Own Pace 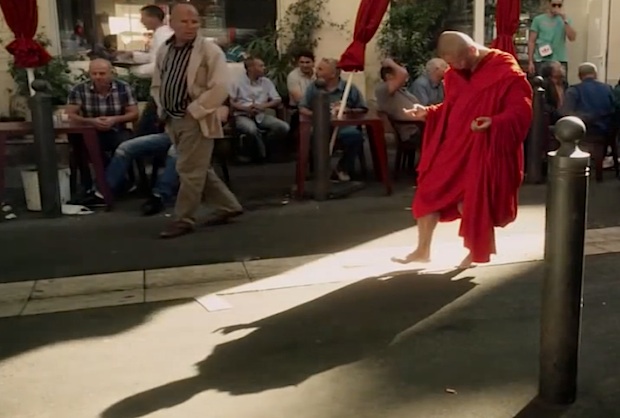 Besides breathing, there may be no more common activity than walking. The movie Journey to the West (based loosely on a classic Chinese tale) first arrived in our country with an acclaimed Tribeca Film Festival premiere, and it’s an extraordinarily unique film – well, actually, it’s not a film as we typically think of scripted movies, but more a meditation on walking as a spiritual practice. And I’ve never seen anything like it.

Taiwanese director Tsai Ming-Liang filmed an exquisite series of 14 long takes that follow Lee Kang-sheng, donning a bright red Buddhist monk’s robe, as he walks barefoot very, very, very slowly. In a meditative state he inches forward, oblivious to what’s around him, towards an unspecified destination with profound energy, devotion and discipline.

We are left critiquing and celebrating the world, all at the same time.

Amid the hustle and bustle of the public spaces of Marseille, France, his progress is barely perceptible; everything moves at a regular pace around this captivating monk. Watching this 56-minute work of art, I went on a spiritual journey through a sequence of states of consciousness: bored, impatient, annoyed, intentional, calm, playful, engaged, enchanted, at peace.

The revelatory moment is when a man appears (French character actor Denis Lavant) in the street in front of a caf?, on a busy town-square, and we see him carefully, painstakingly follow behind the monk’s steps, clearly seeing the world with fresh eyes. As viewers we are left critiquing and celebrating the world, all at the same time.

It’s an extreme challenge to fully explain this film’s brilliance, its surreal beauty. It’s a surprisingly rewarding journey. As the concluding epigraph from the Diamond Sutra says, “Our life is like a dream, a drop of dew, a flash of lightning.”

I’m not sure I will ever walk exactly the same way again. After experiencing Journey to the West, my normal 15-minute walk to work this morning took nearly twice as long.

The film isn’t currently streaming online, but can be seen in its entirety as an extra on the DVD Stray Dogs, one of Tsai Ming-Liang’s previous movies. You can check out the trailer for Journey here: