Celebrate Ideas that Break the Mold 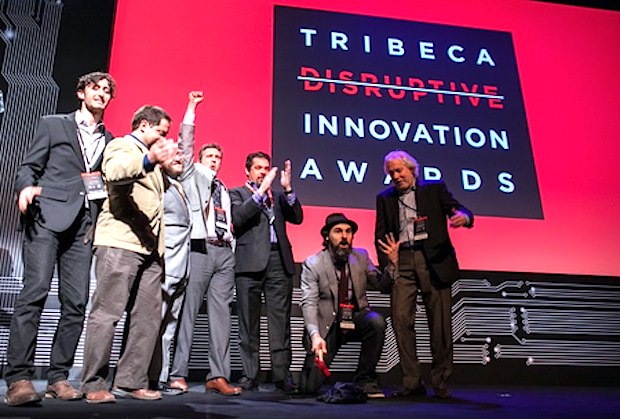 So there I was last Friday morning on stage, about to smash a glass in front of hundreds of people. But this was no wedding. It was part of an opening ceremony at the Tribeca Disruptive Innovation Awards, which are sort of like MTV’s VMAs, but with a red hammer instead of a moon man.

The awards celebrate “those whose ideas have broken the mold to create significant impact.”? Winners present that morning included Shane Smith of Vice Media, Bill Simmons of Grantland, Brad Katsuyama of IEX, Reshma Saujani of Girls Who Code, and a dozen other innovators and boundary-pushers.

To genuinely disrupt religion, to serve the people no longer being served, follow the voice that threatens to overturn prevailing fashions and infrastructures.

Religion was a hot topic at the awards. It was a field singled out by keynote speaker Clayton Christensen as being in need of greater disruption, along with how we parent (“Stop outsourcing!” he said) and how we confront terrorism. Author of The Innovator’s Dilemma, Christensen is the inspiration for these awards. His work responds to the increasing number of people (across faiths and denominations) who are fleeing traditional houses of worship to go off on their own spiritual exploration…or not go, at all.

My own spiritual journey started the week after the Twin Towers fell. I fled my job as an attorney to pursue a life as a rabbi. My calling was to try and address the spiritual concerns of those for whom the late 20th-century models of Jewish expression are no longer compelling (if they ever were) – those who think it makes as much sense to observe in the fashions of our ancestors from 1765 Poland as it does those of 1985 Long Island.

I met Rabbi Morris Shapiro, a Holocaust survivor who, toward the end of his life, taught Talmud to would-be rabbis in the basement of the Jewish Theological Seminary. “Why do it?” I asked. “After what you saw, why live an entire life as a rabbi?”

“Judaism rests on three things,” he replied. “God, Torah and Israel. I love Torah, I love the people of Israel… two out of three ain’t bad.”

But, two out of three was never enough for me. Late 20th-century Judaism held that Judaism could survive market and technological change by focusing on good management (the “rabbi-as-CEO” model) and an emphasis on listening to the needs of a changing and dynamic laity. However, genuine disruptive innovation (or inspiration) rarely comes about in that fashion.

Christensen’s business-themed book puts forth the theory that well-managed firms fail to stay atop their industries precisely because they do what responsible firms should do – listen to their customers, invest in new technologies, etc. They cannot maintain their position of leadership because they cannot do the crazy, irrational thing that will ultimately disrupt their industry.

Every honoree at the TDI Awards came onstage and, one after another, spoke of the need to buck the trends and the consultants, stop asking what kind of products people want and, instead, present them with possibilities that they never knew could exist. As our host, Perri Peltz, handed a hammer award to Airbnb co-founder Brian Chesky, she wondered aloud how many people there must be who wish they’d thought of Chesky’s idea first.

What all of these disruptors possessed was a deeply personal calling (or, if you prefer, drive) that can’t be quantified or manufactured.

Abraham, the original disruptive innovator, famously placed a hammer in the hand of the largest idol in his father’s storefront, after smashing all of the other icons. A current retelling of that story would have Abraham as an Apple Genius who, when the manager returns to find all of the screens busted on the iPhones and iPads on display, says that the iWatch did it.

The most powerful protection these innovators have, writes Christensen, is that as they “build the emerging markets for disruptive technologies… they are doing something that it simply does not make sense for the established leaders to do.” In other words, if you wanted to genuinely disrupt religion – to serve the people who are no longer being served- you would have to be like Abraham and follow the voice that threatens to overturn the prevailing fashions and infrastructures.

A voice that calls you to a higher purpose.

As Christensen teaches, it doesn’t always make sense for the existing structures to listen. But two out of three is running out of steam in this century.

As we went on stage, Kula handed me the red hammer to break the glass, saying: “You’ll need it.”

Rabbi Dan Ain (@rabbidan) is part preacher, part philosopher, part interviewer and provocateur. He finds holiness in honest conversation, in the spaces where people can say what they really think and allow others to do the same.?? ??For the past decade, Rabbi Dan has been creating opportunities for these interactions ? hosting Friday Night Dinners with comedians and cosmologists, klezmer brunches with artists and analysts, appearing on Sunday morning TV and in private apartments with people looking for a way to talk about God on their own terms.