From Standing By to Understanding: Black Lives Matter 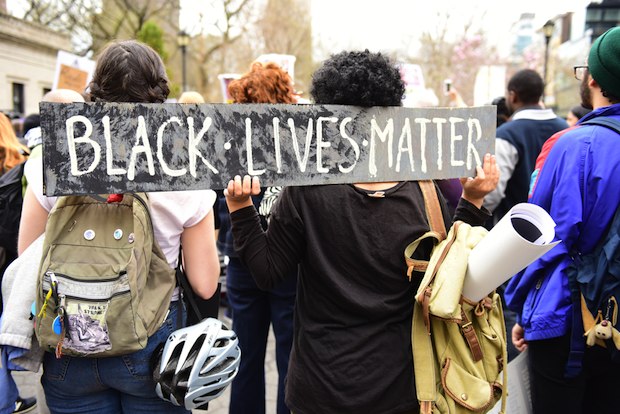 I have been in and out of sleep all night. I wake automatically reaching for the remote to see if it has gotten any worse. I hold my blanket up so that only my eyes can see, pretending somehow that if I cover enough of myself, only parts of the news will infiltrate my soul. It’s too late, though. All of me is infected. All of us are infected.

Baseball, the telltale sign of hope springing eternal, played in a silent Camden Yards – fans locked out for fear of violence. Curfews have been set; people of all ages locked in their homes by 10 p.m. Barricades made up of police in riot gear; with the U.S. military to reinforce the line against resistance. Armored vehicles, automatic weapons, jail-vans there to swoop in for fear of violence. This is not Baghdad. This is the American city of Baltimore.

We pretend to engage in national conversations about race, but we only superficially engage in dialogue until the coast is clear and we can return to what we hope is normal.

I am both tired and frightened. I am tired because the scourge of racism runs deep and wide through our national fabric. For all of the progress we have made, it feels these days that we keep regressing. Because everyone has the ability to take video, we see what seems to have been hiding in the shadows: a reckless disregard for people of color.

I still believe that there are many more good cops than bad ones in this country, but way too many feel they can shoot now and explain later. People of color are mowed down like animals, and then the country is dismayed at the outrage of protesters.

So, I am tired, but I am also scared that the chasm between understanding and hate, between outrage and justice, has grown so wide, that one of our beloved cities is going to blow up like a powder keg. We wonder if our own city will be next. We wonder, when we see people whose color is different than our own, what they are thinking….and what we think of each other. We pretend to engage in national conversations about race, but we only superficially engage in dialogue until the coast is clear and we can return to what we hope is normal.

We are paralyzed by our fear because we really don’t know how to make the “other” into “self.” We talk like we do, but we don’t and can’t – because the truth of the “other” is too painful to bear. So, millions in our country hibernate in the guise of understanding, while one city after another takes turns on the carousel of injustice and ensuing anger, violence and square-offs with the authorities. We feel like we have to take sides.

Baltimore will calm down, just like Staten Island did; just like Ferguson did; just like South Carolina did. But make no mistake; the nation is simmering and our fear-filled paralysis in the midst of the heated waters will only add to the potential of the next explosion.

Last week, I was one of ten rabbis (#tenrabbis) invited into a new space for the world of religion. It was called the Disruptive Innovation Anti-Summit, part of the Tribeca Disruptive Innovation Awards and Tribeca Film Festival. Some 800 people from various fields gathered to continue dedicating themselves to disrupting the same old ways of doing business, in order to find the agility to create anew. In the world of ethics and justice, the possibilities are endless, if we but only feel liberated to unshackle ourselves of old ideas, and ready ourselves for the new.

Perhaps most important is what I learned at the event from innovative filmmaker Jason Silva, host of National Geographic Channel’s Brain Games. He teaches that what we create, creates us. As we grow into the world, the world grows into us.

The world is waiting for our honesty, our truth, our compassion, our action, and our ability to step up and act. What we put into the world is exactly what we will become. This is our choice. It is time for us to disrupt the old and dangerous pattern and create anew, so we can bring justice and peace to all communities.

This post was first published April 29, 2015, on My Jewish Learning.