Beyond Living with Cancer. Stuart Scott’s Wisdom for Living, Period. 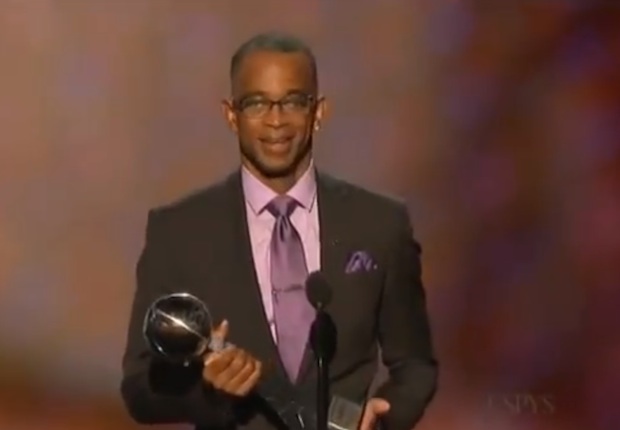 This video of ESPN’s Stuart Scott accepting the Jimmy V Perseverance Award is about way more than living with cancer – as if that would not be reason enough to watch. You can watch from the beginning, or pick it up at 6:50 when his speech begins, but either way you will be both inspired and enlightened.

The “take away’s” for me are:
1.?? ?Think bigger. Whatever the challenge, address it with your eyes focused on whatever you believe matters even more. For Scott, that means his family, especially his kids, but it could be anything.
2.?? ?Work hard. Push yourself as much as you can, as often as you can, even when you don’t know – can’t know – what the result will be. The work itself is a powerful result.
3.?? ?Fighting equals winning. If you are in the fight, if you are trying to make it better, you are winning.

I believe in all three of those insights, and I work hard at living them – sometimes finding it very hard to do so, especially the third one. In fact, I almost turned off the video at that point feeling frustrated by the fact that there seemed to be no place for losing, for giving up with dignity, for allowing one’s self to feel defeated, as I think we all do at one time or another. But I hung in just a bit longer. Perhaps that’s my addition to the wisdom found here: hang in a bit longer than you want to, and you often find what you thought wasn’t there.

At the 9:30 mark in the video, Scott addresses the very challenge I was feeling. He reminds us to fight and the fight itself is a celebration of life…and that sometimes it’s okay to lie down and rest – even in the ultimate sense of that word. That if cancer takes his life, he will not have lost.

A fighter who embraces that ending the fight is not necessarily a loss – not if you fought the fight well, and lie down on your own terms. If that isn’t wisdom for approaching pretty much any of the struggles we face, I don’t know what is.

So, thank you Stuart Scott. In a world often divided between those who celebrate perseverance, but often miss out on the compassion and love that come from deep acceptance, and those who are masters of acceptance but often miss the intensely life-affirming power and celebration of our inner strength which comes from persevering, you show us a third way – a way, like so much of what we share at TWD, which looks for the wisdom found in each of the more common paths, and invites us to fuse them into something which proves that 1+1 can equal far more than 2. It can equal a life well lived, come what may.