The Israel-Hamas War: Hope on the Edge 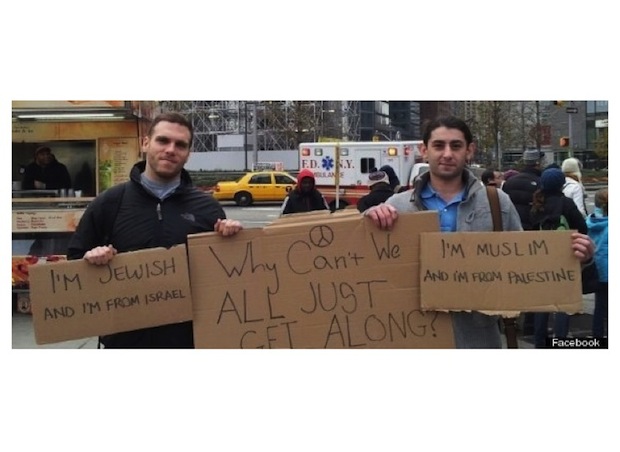 “Use your words,” I remember saying to my children when they wanted to hit or bite during those terrible twos when children don’t have the words to adequately communicate their feelings. Well, the words of diplomats and politicians, political scientists and pundits, intelligence and military experts, artists, religious leaders, and peace activists have all failed. We are killing each other rather than using our words. Whatever one’s political positions – right or left, hawk or dove – and whatever one’s primary allegiances and blood ties – Jewish or Arab, Israeli or Palestinian – war is, even when justified, as I fully believe Operation Protective Edge is, a monstrous failure of communication.

I am not claiming there is any moral equivalency between Israel and Hamas in this war. Hamas is a nihilistic group whose war to the death strategy makes it a contemporary death cult that needs to be thoroughly destroyed. But when we go to war there is, by definition, an increasing symmetry in the way we cannot hear, the way we cannot make sense of each other’s words.

In the midst of war – especially in the midst of war – it is understandable to despair that words could ever create reconciliation and peace. Holding together the unwavering commitment to win the war one is waging with all its inevitable (and even necessary) violence and brutality with faith in and commitment to words ultimately working to replace weapons, as a means of communication is no easy task. More often than not, those who retain faith in words distance themselves from those in support of war and those who support war see the belief in words as hopelessly naive.

Wisdom is the holding together of seemingly incommensurate sensibilities – the bringing together of two seemingly contradictory positions. This is especially difficult to do at these repeating nadirs in the Israeli-Palestinian conflict when justifiably we rally around the flag, inevitably see things as zero-sum and understandably feel that anyone recognizing the suffering of the enemy or inviting nuance is suspect. But the certainty we experience in times of war, however justified the war, which actually allows us to wage war is also the enemy of compassion and imagination – qualities necessary for peacemaking the day after the war “ends”. It is during war that we need to hear at least some words from an alternative reality.

Here are a few words from parents who have lost a close family member as a result of this prolonged conflict. These people are not removed from the conflict and therefore not vicariously identifying (as so many here in America on all sides do) either by demonizing the bad guys or idealizing the good guys – and yes there are better and worse guys in this tragic drama. The actual loss of their children should have easily morphed into deep and enduring hatred but instead… well, here are their words – open letters to the newly bereaved Palestinian and Israeli parents.

“This letter is written from the bottom of my heart, and from years of experience in the quagmire of bereavement, and is addressed to the bereaved mothers whose agony has joined the long list of their predecessors… The acts of hatred, incitement and above all the two horrible murders of the four youths, brought back great sadness as well as feelings of anger and confusion, which we first felt after my eldest son was killed. I am with you in your feelings of grief and shock.”

A Palestinian mother, Hanan Lubadeh from?Nablus, whose 15-year-old son was killed in 1989, writes:

“I’ve known Israeli bereaved mothers for many years. The mothers’ pain is similar, no matter if they are Israeli or Palestinian. It does not matter whether she is from Nablus, Shoafat, Rosh Pinah or Nof Ayalon. The pain is seared into us and will be with us forever.”

And here is an excerpt (I urge you to read the entire letter) from an eloquent letter dated July 18th – just a few days ago – from Izzeldin Abuelaish a father who lost his children in Gaza:

“After the killing of my three daughters by an Israeli shell in January 2009 I concluded that if my daughters were the last sacrifice on the road to peace between Palestinians and Israelis, then I accept their loss. I promised that I would continue to fight with the only means available to me: wisdom, courage, strong words and meaningful action…all of us (Palestinians and Israelis) take a defensive position to justify our acts. This originates from fear and from past experience. Only when we start to take responsibility and reconcile ourselves to new thinking will we get a different result. I understand intimately the meaning of unbearable suffering, loss, the absence of security and what it is to live in terror. And I understand and feel the suffering of the Israelis who have lost loved ones and are forced to live in fear. But what is the best way for Palestinians and Israelis to resume hope and life? We need to heal our people and close the wound completely, not in stages or in ways that leave part of it open.

Nothing is impossible but we need to act before it becomes irreversible. Palestinians and Israelis have been angry for a long time but we need to ask what our anger has achieved? It has brought destruction and injustice to ourselves and to others. When the war ends, and I hope it happens soon, all will celebrate the victory but in reality, all are losers from war.

What kind of victory produces orphans or maimed children and wounds to the soul that never heal? As a wounded, bereaved father who lost his three beloved children I feel the suffering of all human beings but I call for an end to this bloodshed.

This is a moment in history that must be captured. The hope and the future safety and freedom of Israel are linked to the security, safety, freedom and future of Palestinians. We are like conjoined twins and any harm induced to one will impact the other.

The courageous thing for both sides is to embrace the dignity, grace and strength of the other. We have no choice but to work together to heal our wounds, wipe our tears and, while learning the lessons of the past, to look forward. George Orwell said that the further a society drifts from the truth, the more it will hate those who speak it. We all bleed the same color and the life of all is equal and precious. No cause justifies the killing, intimidating or threatening of human beings.

Let us build a new generation that believes advancing human civilization is a joint project and that the most sacred things in the universe are humanity and freedom.”

We can read these words and still be loyal to our people. Actually we need to. War can’t end until we can speak – until we can find the words.