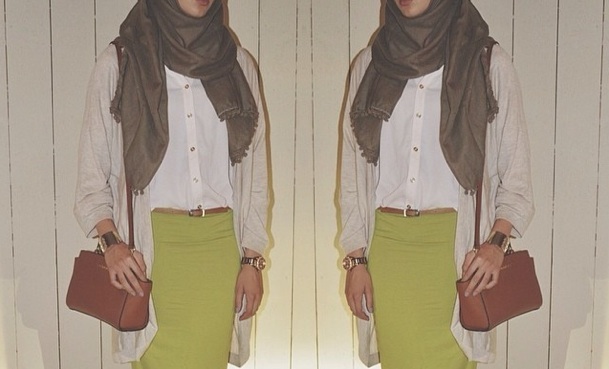 Meet sisters-in-law Mimi Hecht and Mushky Notik. Struggling to find clothes that were stylish but still as modest as Orthodox custom requires “they took matters into their own hands and set out to create the ultimate pieces they needed for their wardrobe” and founded a small clothing line Mimu Maxi in Crown Heights, Brooklyn. (Interestingly, they let their “com-MIMU-nity” of women help vote on designs – not exactly what one expects from traditionalists!)

Now meet Summer Albarcha, a popular Muslim fashion blogger who goes by the name “Hipster Hijabis“. She promotes trendy yet modest fashion wear for?observant Muslim women, who like observant Orthodox Jews, struggle to find sufficiently modest, stylish clothes. On July 12, Albarcha posted a photo of herself to Instagram wearing a lime-green Mimu Maxi skirt, a few simple accessories, and of course, her hijab. She looked great and Mimu Maxi re-posted the photo to its Facebook page and to Instagram.

Given Jewish-Muslim relations, the war in Gaza, and the traditional customer base of Mimu Maxi it wasn’t surprising that there were people appalled to see a Muslim woman in a hijab on the Mimu Maxi site. But the real story was a respectfully defiant open letter on Facebook Mimu Maxi issued: “It was exciting for us to share a Muslim modest fashion blogger’s style-take on our design… it was modest. It was feminine. It was beautiful… Summer is a modest fashion blogger from Missouri who shares some of our deepest values…” Albracha, who gained a number of new followers from the Jewish community, added, “It’s exactly at this time that such a collaboration means the most.” Observant Orthodox Jewish women and Traditional Muslim women sharing a deeply held value!

There are plenty of reasons to despair these days about Jews and Muslims. It has taken myriad of dehumanizing and violent acts over decades to get where we are and while there is no moral equivalency, there is surely symmetry of hate. But this collaboration is more than simply a very small hopeful moment about people with genuine difference actually sharing a deep common value. There is a particular wisdom these women are witnessing. They refused to sacrifice either loyalty to their tradition or to contemporary style. In a world in which traditional values such as modesty and a modern aesthetic could not be more disconnected, these women created a refreshingly tailored position.