Automated Thanking Machines Give Out More Than Just Money 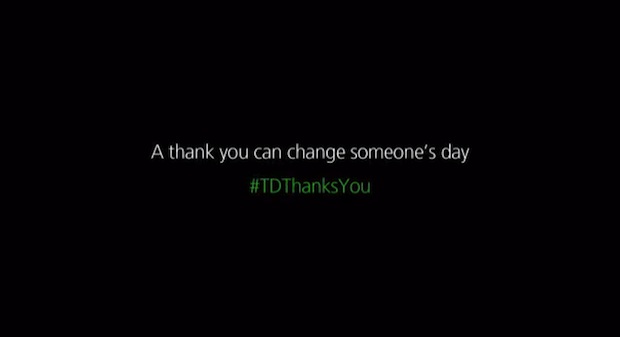 Last week over 30,000 TD Bank (Toronto Dominion) customers across Canada were surprised and delighted to receive $20 as a thank you for being regular customers. But a dozen or so customers received a much bigger surprise. These pre-selected folks received a special customer thanking experience at their local branch through the ATM’s turned into Automated Thanking Machine (ATM).

The gifts doled out were all personal and emotional homeruns. A single mom unable to afford to take her kids on vacation was given a trip to Disneyland. An elderly woman received tickets to Trinidad so she could visit her daughter who is fighting cancer. There’s more: These experiences were captured in this heartwarming YouTube video called, “Sometimes you just want to say thank you #TDThanksYou.”

“A thank you can change someone’s day, so that’s why we have been surprising our customers across Canada, to say ‘TD Thanks You,” said Tim Hockey, President and CEO of TD Canada Trust.

Close to seven million people have watched this video in the ten days since it was posted! I honestly don’t know what to feel about this. Is this a harmless gimmick, a cynical exploitation of vulnerable people, or a genuine expression of compassion and gratitude to regular customers who have many choices of where to bank?

Is this making an authentic connection with customers or a hard luck lottery – a clever marketing strategy that customers actually paid for many times over – in which TD Canada secretly picked out a handful of customers from thousands and thousands, after some advertising company scrutinized each customer’s stories and determined which would be most evocative and bring in the most customers by selling false hope? Is this atonement for “bad banks behaving badly” or an example of the long-standing religious practice of mitigating guilt called indulgences?

Given the ambiguity of all this why did I, as I am sure many people did, tear up watching this video? What did this tap into? Beyond the tremendous power in the simple act of saying thank you, of gifting, and of seeing someone’s genuine vulnerability eased is it possible, whether corporations are people or not, that we really wish their bottom lines included appreciation, compassion and concern for the vulnerable? But what is the difference between a thank you and a gift between people and one offered by a corporation to individuals?