‘American Sniper’ in a Polarized America 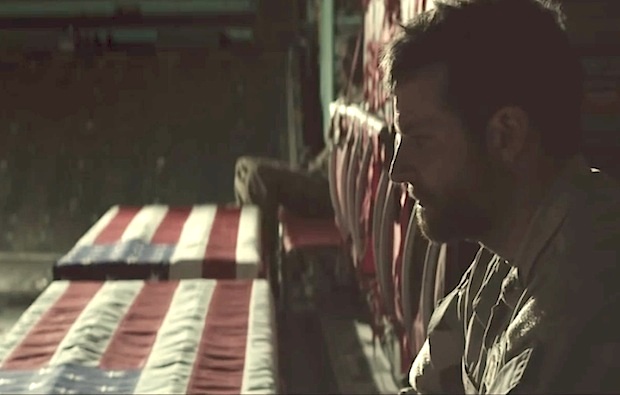 Clint Eastwood’s film about the late Chris Kyle – nominated for six Academy Awards this weekend – is not only the highest-grossing war film of all time. American Sniper has become a cultural lightning rod for fierce, emotional debates about the very meaning of war, heroism, sacrifice, patriotism and truth.

We know that Kyle, a U.S. Navy SEAL, endured four combat tours of duty in Iraq and was nicknamed Legend for being the most lethal sniper in U.S history. At a firing range in 2013, Kyle was tragically shot and killed by a former U.S. Marine (currently on trial in Texas), whom he was helping deal with PSTD.

Eastwood’s film has become explosively politicized. On the left, director Michael Moore, actor Seth Rogen and MSNBC have all criticized the film as war propaganda that glorifies murder, propagates hate of Muslims, and promulgates lies about our Middle Eastern interventions. On the right, Fox hosts have lauded the film as an eloquent tribute to an American hero, an honest non-politically-correct depiction of the “savages” with whom we’re at war, and a much-needed patriotic recognition of the great sacrifices of American soldiers.

We glorify and idolize our protectors, without actually worrying about them, or knowing their impossible choices.

Yes, we know, there are (paraphrasing here) “redneck, rural, white, masculine, gun-toting, beef-eating, church-going, flag-waving, Muslim-hating, Limbaugh-listening, Cracker-Barrel-shopping conservatives” for whom this film is orgasmic. And there are “sophisticated, urban, secular-elite, moral relativist, blame-America, anti-military, tofu-eating, Whole-Foods-shopping liberals” for whom this film is repulsive. So what’s new? American Sniper is a Rorschach test for the right and left’s projections of their own uncertainties and insecurities, fantasies and nightmares, guilt and desire.

Still, this is not some simple pro-war movie.

The film makes no claim regarding the rightness or the wrongness of the Iraq War. There’s a remarkable absence of any political leaders making geopolitical, strategic or ideological arguments for going to war. The only reference to why we declared war on Iraq is a ten-second news clip making the now-discredited WMD argument. American Sniper suggests that soldiers don’t go to war because of any sophisticated arguments from less-than-honest leaders. Right or wrong, manipulated or not, the movie asserts that soldiers go to combat for each other, to protect their brothers and sisters in arms, as well as their families. At one point, Kyle explains to his wife that the love soldiers have for each other is equivalent to the love that a parent feels for a child. Parents sacrifice their lives for their children and this intensity of love draws soldiers like Kyle to return repeatedly to the battlefront at the cost of losing the very families they’re ostensibly protecting.

The defining scene in American Sniper that makes this both a devastating war movie, and anti-war movie, comes early in a flashback to Kyle’s childhood. At the dinner table, his very traditional father offers a patriarchal life lesson to his two boys: “There are three types of people in this world: sheep, wolves and sheepdogs. Some people prefer to believe evil doesn’t exist in the world. And if it ever darkened their doorstep they wouldn’t know how to protect themselves. Those are the sheep. And then you got predators. They use violence to prey on people. They’re the wolves. Then there are those blessed with the gift of aggression and an overpowering need to protect the flock. They are a rare breed, who live to confront the wolf. They are the sheepdog. We’re not raising any sheep in this family.” The father then lashes his belt against the dining room table. “I will whup your ass if you turn into a wolf,” he says to his two sons. “We protect our own. If someone tries to fight you, tries to bully your little brother, you have my permission to finish it.”

The yearning to neatly parse our world, especially when chaos and evil erupts, is real. But how we do so makes all the difference in our world. Mapping the world into predators, prey, and protectors who use violence (whupping ass) as the only means of protection warps human beings. This stark black-and-white divide destroys our capacity for empathy, undermines our cultivation of wisdom and understanding, and crushes our tolerance and respect for difference and even love.

Kyle goes to Iraq as a sheepdog to extract vengeance on a country that had nothing to do with 9/11. Consumed with hatred for the wolves, he relishes killing, as protector of the sheep. The tragic genius of American Sniper is that, by the end of the film, these roles blend into a troubled ambivalence about violence. Kyle, the sheepdog, the protector, becomes both wolf and sheep, both predator and victim.

And what about the wolves? Seeing Iraqis as wolves – as animals – means not considering the humanity of those we’re fighting and killing. There’s no need to think about their motivations or context. There’s no reason to consider their families or neighbors who, as a consequence of the hunt, become either victims or sheepdogs (wolves to us) protecting their own.

But, most important: Who are we, viewers of this film, voyeurs of this war? For the past 13 years of war, only about three-quarters of one percent of the country has served at any point in the post-9/11 years, most more than one tour of duty.

So most of us, then, aren’t the sheepdogs? We barely know any protectors? Yes, we glorify and idolize our protectors, but we do so without actually worrying about them or knowing their impossible choices, the double binds they face, the devastating physical and psychological consequences – both on the battlefield and long after the conflict subsides. The film’s scenes of hospitals (where wounded soldiers were depicted by soldiers with real injuries), of the shellshock of Kyle’s brother, and of the meltdown of Kyle’s marriage all strip terms like collateral damage and PTSD of their clinical abstractness. Soldiers – our fellow citizens – descend into hell in war and we conveniently know very little about their descent.

So are most of us victims? Sheep being protected? It sure doesn’t feel like it as we go about our daily lives, enjoying our families, entertainment, vacations, a booming stock market, as if nothing’s going on. Most of us bear no personal costs for the war and (unlike Vietnam) our “censored” media insures we don’t even need to see the brutality, ugliness, violence, viciousness, cruelty and death of war.

We imagine we are the sheep/victims so that we can live with ourselves sending off our protectors. But we are not victims. It is the protectors who come home victimized. They leave a war that made them predators, in which thousands upon thousands of innocent people (sheep?) have unintentionally been killed, wounded, and made homeless. In the fog of war, the relationship between sheep, wolves, and sheepdogs is terrifyingly fluid and our seemingly fixed identities realign. Perpetrator, protector, and victim neither define nor exhaust our identities. They merge.

Eastwood, as much as we may want to stereotype him as a conservative ideological warmonger, understands something dark about the psychology of war. Because we want our response to atrocities to be principled and consistent, and because we want to feel good about sending our young off to battle, we go to war with moral clarity as to our roles in the drama – evil wolf, passive sheep and warrior sheepdog. Then everyone comes out of war into an obscure reality of uncertainty and ambiguity. We need to seriously ask: Who benefits from parsing the world into wolves, sheep, and sheepdogs?

Hiding from the truth makes everyone a victim. Yes,?American Sniper is about a hero – a dark hero of a tragic, damaged worldview.