AFI Film Club: Why The Wizard Of Oz Got Me Thinking About Sneakers 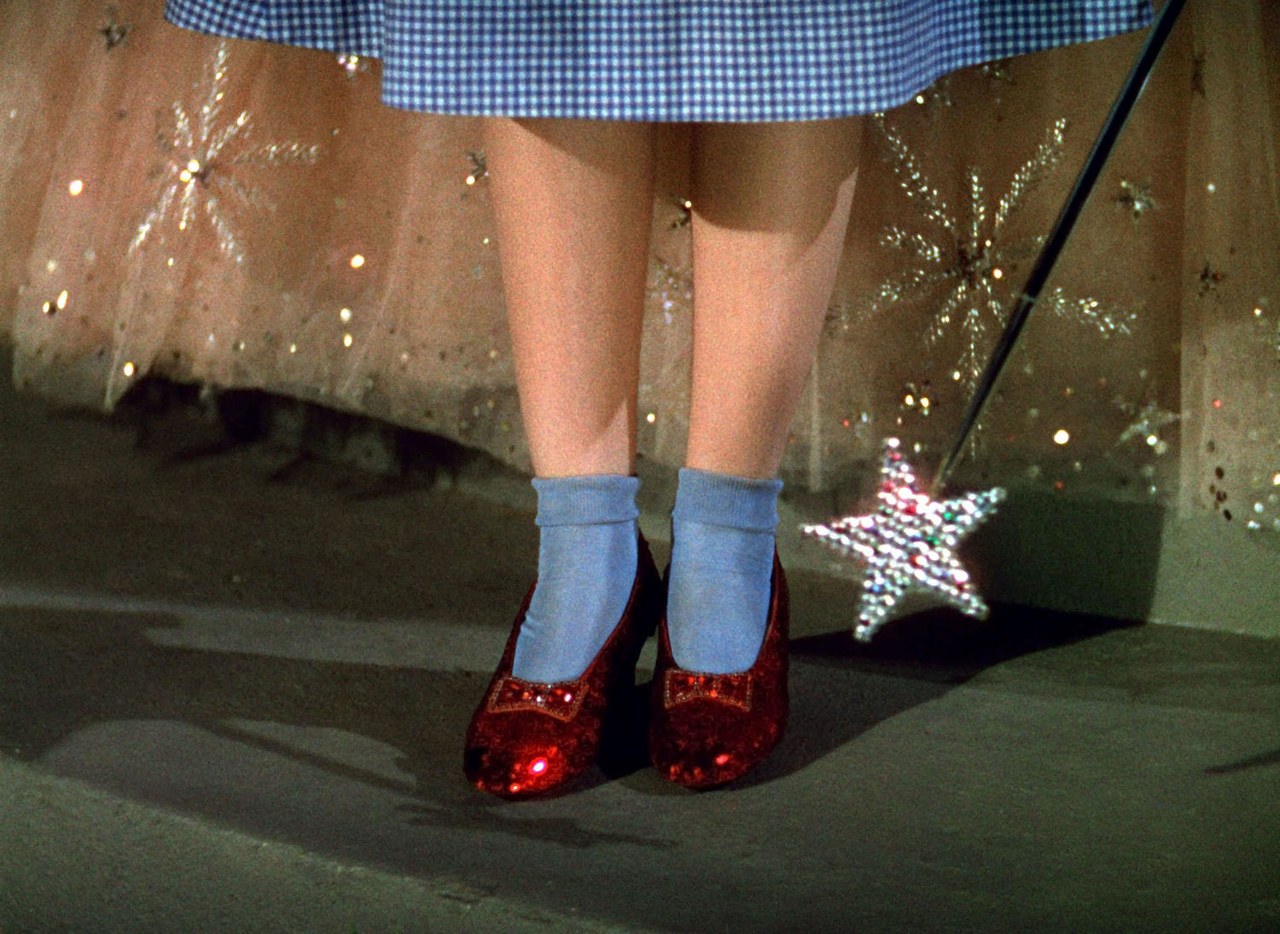 Welcome to The Wisdom Daily’s AFI Film Club! Each month, I will be counting down the Top 10 American Film Institute’s list of Motion Pictures (the 2007 update) and exploring an American ideology/ theme in a recap. Why AFI? Why here? Why Now? Why Me? Click here for a brief rant on my connection to the catalog (insert inappropriate “the list is life” joke here). Enjoy the post and comment (about the film please- I already know that I’m terrible at the kazoo).   Here is AFI’s #10, The Wizard of OZ:

We have a complicated relationship with childhood. In some ways, we prize it, yearn for our youth, and lobby the government to protect our children’s innocence. Yet, we scorn when childishness seems to be in excess or misplaced, and demand that a person pay the price for arrested development. We tell cautionary tales of such offenders; Peter Pan loses Wendy and his friends to adulthood, Biff Loman becomes an unemployed pilferer, and the bratty kids in Wonka’s factory turn into confectionery delights. The idea of a carefree, sweet, naive existence is as intriguing as it is unnerving, not just because of the dangers of ignorance, but because of the bliss that accompanies it. We have a need for people to grow up and learn the harshities of life, and we relish in watching them do it.

Perhaps we have that same inclination when we watch Dorothy get sucked up in the twister, excited for her to live her daydreams of color, as long as she surmises that all she desires is in black and white. Maybe the tone of MGM’s dedication of the quintessential American fairytale, “To the Young in Heart”, is as much of a warning as it is a celebration.

Number ten on the AFI list, The Wizard of Oz, is a coming-of-age story for the ages. The film spearheaded the trusty American template, and has inspired everything from The Great Gatsby to this year’s breakout hit Lady Bird. Dorothy (Judy Garland, illuminating every scene) lives in a world of rules and hardships. She appears to be the only kid for miles on her farm, and is reprimanded to behave by her stern Aunt Em (Clara Blandick) and Uncle Henry (Charly Gapwin). She is tormented by the injustice of the shrill, wealthy, Mrs. Gulch (Margaret Hamilton, in the role that defined her) having the power to destroy Dorothy’s true love, her dog Toto.

Dorothy dreams of a place beyond her four corners, and voila!, she’s transported by tornado to technicolor Munchkinland. Before she can get out her first “Toto, we’re not in Kansas anymore,”Dorothy inadvertently kills The Wicked Witch of the East, thrilling The Lollipop Guild, and enraging her sister, The Wicked Witch of the West. But what’s really pissing the Witch off is losing the ruby slippers to Dorothy, and Westy swears to seek vengeance on the girl. Under the advisement of Glinda, The Good Witch of The North (Billie Burke, as what I think Lady Liberty looks like), Dorothy travels to The Wizard of Oz, hoping he’ll send her back home.

Following the yellow brick road, she collects a few sidekicks, a scarecrow without a brain (Ray Bolger), a tin man without a heart (Jack Haley), and a lion without courage (Bert Lahr), who all hope that the levitating head will look kindly on them. When they finally arrive at the Wizard’s lair, he offers no free lunch and probes the crew to steal the witch’s broom. They obtain the stick and off the witch, but pay too much attention to the man behind the curtain, and realize the Wiz is just your common American dude (Frank Morgan, with timeless comedic timing). Sensing the team’s extreme disappointment, Wiz promises to take Dorothy back to Kansas, only to accidentally leave without her. Never fear, D! Glinda comes to the rescue and informs Dorothy that the ruby slippers could take her home, affirming that she had the power in her all along. After a few “No place like home’s, she’s back in black and white, surrounded by the people and dog she loves.

When the film was released in 1939, it was praised for its cutting edge cinematic coloring, opening the door to a new world of vivid rainbow storytelling. From the greenness of the witch’s face to Dorothy’s blue dress, the 3-strip tint has been raved and revered since Oz’s release date. With that in mind, the most breathtaking burst of hue is 16 year-old Garland’s portrayal of a young girl in existential unrest. Her earnest unhinged emotion encapsulates the energy of girlhood let loose, and I wish the film would’ve kept the camera on her more, rather than constantly panning to what was certainly a state-of-the-art set, but what now looks like a child’s playground.

Yet, in many ways, that’s precisely what Oz is, a bizzaro-world playground for Dorothy’s psyche to play out her insecurities and existential questions. In Oz, Mrs. Gulch becomes the Wicked Witch of the West, farm hands Hank, Hickory, Zeke become the Scarecrow, Tin Man, and Cowardly Lion, respectively, and cooky ol’ Professor Marvel becomes the all-powerful Wiz. This land allows her to both grow up and be a child, getting to interact with people in her life in extremities, both joyful and apprehensive. This goes beyond the world of restraint that she feels in Kansas.

This being a 1930s coming-of-age tale, white American prejudice rears its head, and the film’s representation of race and queerness are antiquated and troublesome. The fair Glinda draws a comparison between beauty and virtue, explaining that green skin and frizzy dark hair reflects inner nature. Grimly, this is used to justify the murder of the Easty and Westy; the uncommon is evil, and these women’s lives are considered valueless. (Many many Oz adaptations have combated this racism, productions like The Wiz, Wicked, and even The Muppets Wizard of Oz.) Similarly, the Cowardly Lion seems to not so much be fearful as he is effeminate; a man who enjoys curling his long, lavish, hair, and wearing a red bow atop his head. A feminine male is supposed to seem perverse and need fixing, and is cured by “manning up” and rescuing Dorothy, claiming that one could and should overcome this femininity and queerness.

Even with some of these outdated and obscene lessons, there is one message that stands the test of time, a theme that is entwined in The Declaration of Independence: life is unpredictable but a person can learn to overcome. The prop that most represents this American spirit are the ruby slippers. They are literally plucked off the feet of a dead women, a person who has grown all she can, and placed on young Dorothy’s feet. The red color is reminiscent of womanhood and the life-cycle, and in the odd Oz way, is a puberty of mobility for Dorothy, a redness that allows her to continue on her journey down the yellow brick road.  Wanting to retrieve the slippers, the Witch barks “I’m the only one who knows how to use them, they’re no use to you,” essentially wanting to keep the power of self-reliance to herself. With the encouragement of Glinda, Dorothy keeps the shoes on through her journey, and once she believes in the power of herself, the accessory brings her back home.

The ruby slippers represent her budding adolescence, but they also represent her youth. The shoes are vibrant and loud, they have carried Dorothy through chases and dances, moments of sadness and joy, doubt and discovery. She concludes that she must go back, that the place for her is at home, and she cannot take the sparklies with her. They exist in the world of the playground, and Dorothy trades them in to return to her world of auburn-grey.

The ruby slippers are now placed on display in the Smithsonian, as many of us would like to keep our childhood, contained and untouched. In its old age, the red sequins are effervescent (if not a little worn) and still spark awe every day. Maybe it is because as Americans, people, dreamers, we are all trying to find our way back to Oz. While we are proud of our growth, praise our development, and love a thumbs up from an approving therapist, a piece of us, however small, does wish we could go back to a time where we lived in wonder and imagination. We walk the streets of Manhattan looking down at our own shoes, and try to find our yellow brick roads on the sidewalk pavement.

Dorothy is an orphan and seems to view Aunt Em as more of a kind governess than a mother, what role does Glinda play in this search for a maternal figure?

Water killing the Witch is super fascinating; there seems to be something inherently “unnatural” about her, since her demise comes from a life sustainer.

What is up with those mean trees?

I totally forgot how essential Toto is to the plot… I always found him a tad annoying as a kid. (Don’t hate me).

“Some people without brains do an awful lot of talking, don’t you think?” -YAASSSS SCARECROW, PREACH!

“And it’s that if I ever go looking for my heart’s desire again, I won’t look any further than my own backyard. Because if it isn’t there, I never really lost it to begin with.” – I don’t know how I feel about this tightly-bowed lesson, it seems to delegitimize a child’s aspirations. Am I missing something?