A Jewish Leader’s Responsibility To Protest 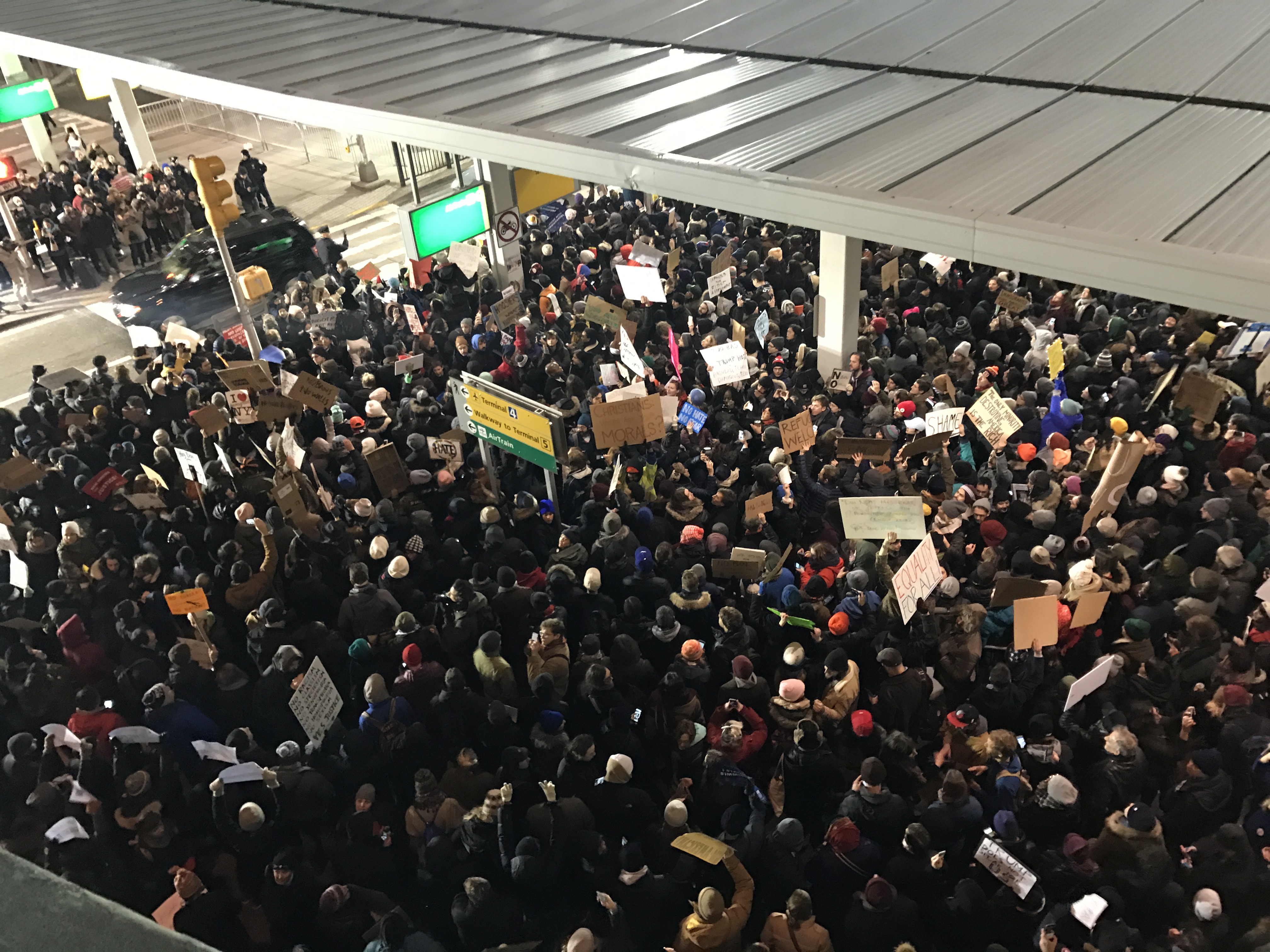 The signs stood as my accusers.

A young woman held a hastily scrawled placard, “They warned me about this in Hebrew School.”  Another held, “Remember the St. Louis.”

On Saturday I found myself at the impromptu protest rally at JFK airport.  The anger was palpable.  The indignation continues to simmer.  It boils over on social media.  It is heard from other nation’s capitals.  A few lawmakers speak out.  Governors weigh in.  More and more raise their voices.

I had spent the better part of Saturday afternoon reading the newspaper about Friday’s executive order.  I became increasingly agitated.  Soon I heard about the rally forming at Terminal 4.  I thought, “I will go next time.  It’s not in today’s plans.”  I read some more.  I grew enraged.  I paced back and forth.  I became indignant.  I put on a warmer pair of socks, grabbed some gloves and headed for the door.  I drove to JFK.  I wondered if I would be able to find what I expected to be a small group of hundreds.

As soon as I pulled into the parking garage I heard the shouts.  I followed the chants to discover what appeared to be some 3,000 people.  I joined the chants.  The group was a mixture of black, brown and white.  There were a few kippahs and a few more headscarves.  The large group huddled together under the airport’s direction signs, bundled in their coats and hats.  From the middle of the crowd the event appeared haphazard and unorganized.

And yet people hugged.  They gained strength in each other’s eyes.  There was a shared, unspoken feeling, “This is America.”

Occasionally travelers tried to weave their way through the crowd.  A few grew frustrated by their extended time in the cold.  They did not expect to experience such a delay when returning to their cars.  Other vacationers offered bemused smiles.  Cabbies honked their horns.  The crowd responded with cheers.

What kind of teacher would I be if I remained in my warm home and enjoyed the last quiet moments of a departing Shabbat?  The signs taunted me, “You would be a fraud.”  I am among the many teachers who offered such warnings.  I shared the story of the passenger liner St. Louis that was turned away from our nation’s shores sending German refugees back to Nazi controlled Europe.  A quarter of its passengers were murdered in the Holocaust.

They were targeted because they were Jews.  They were murdered for no other reason than they were Jews. They were turned away from America for the stated fear that they might be German spies.  We tell our students it was most certainly because of antisemitism.

A teacher’s greatest fear is to be accused of not living up to his teachings – or at the very least not trying to live up to his proclamations.   If Jewish teachings remain in the classroom, if they are only about how to light candles and how to pronounce, “baruch,” then we have added little to our fractured world.   We are called to improve our world, to illuminate our communities with teachings, to add blessings to our nation.

I tell the stories.  I repeat the tales to generations of Hebrew School children.  “How could it happen?” they always ask.  And we always respond, “It begins in small steps.”  It starts in ways that have little bearing on our own lives.  It begins in the distance, at the edge of our concern.

At a certain point, that edge must become our center.  Otherwise, we have failed to heed the lessons we teach, the commands we pledge to uphold.

It did not begin with death camps.  It began with small, incremental steps.  The world said nothing, I warn my students.  Nations stood by in silence.  It was so easy to dismiss the stripping away of Jews’ citizenship. First people just turned their backs.  “Remember!” I tell them.  They nod.

Do they hear?  Do I still listen?

And yet it is not just about Jewish teachings.  It is about more than the lessons I offer my students year after year.  It is also about the promise of America.  My grandparents were not refugees, but they fled lives of deprivation and persecution.  One arrived here when he was two.  A second was the first American child born to her immigrant parents.  Another refused to even discuss the old country with me.  His response to his grandson’s incessant prodding was a repeated, “It was awful.  Why do you think we left?”  The fourth remembered the hunger.  She recalled the Cossacks.  She could still feel the terror. “Hide, little one,” still echoes in her ears.

I imagine others continue to hear such words.

Yes, America has enemies.  But they are not Muslim refugees.  They are not immigrants who, like my grandparents before them, remain enamored of America’s promise.  “Here, Steven, you can be anyone you want to be. You can do anything you want.”

America opened its doors to my grandparents.  Here they still knew hunger.  And here they still found antisemitism.  And yet it never rivaled what they experienced in the old country.  It certainly never diminished their love for this country.  They lived to see a dream realized: their grandchildren never knew their sufferings.

America opened its doors to my grandparents.  And they, in turn, opened their hearts to America.  They fed me that love.  They nurtured in me a devotion to the American dream of welcome.

I offered a silent prayer of thanks to my grandparents.

I looked into the eyes of my fellow protestors.  “This is America!”   There was a measure of assurance in the smiles of strangers and the crowd’s embrace.  This is America.

The shouts and cries grow louder.

I prayed. Let others know these blessings as well.  America, open the doors.

I resolved.  This prayer is now in my hands.  This blessing is for me to fashion.  This inheritance I must now fight to sustain.  It is for me to reclaim – again and again.

Let this forever be America.