The Mother Who Spit On The Homeless Man 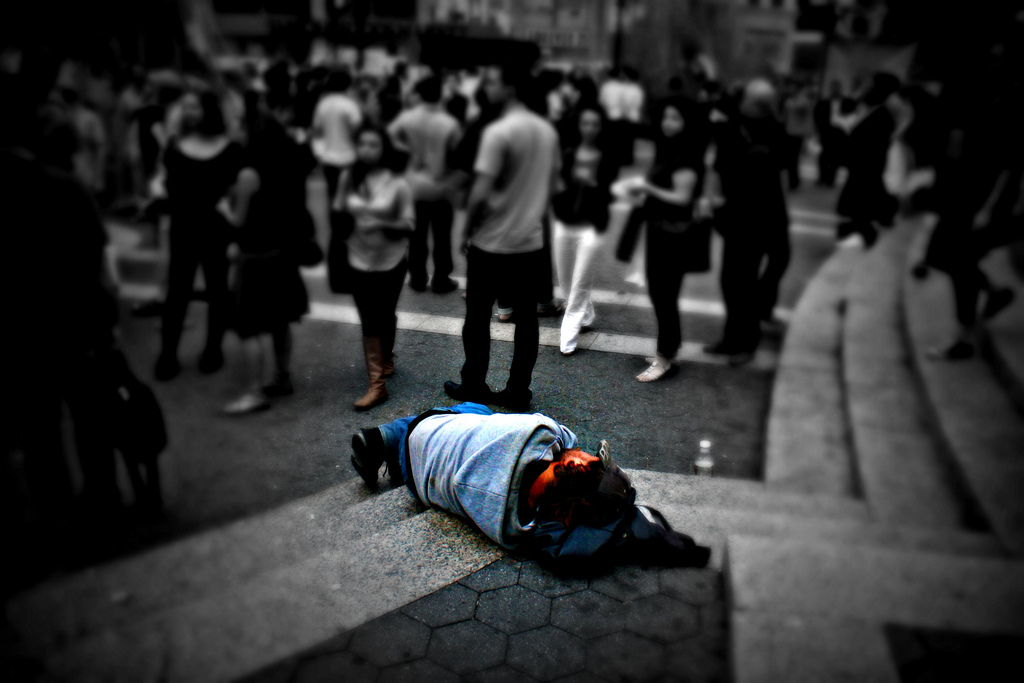 I jumped onto the uptown 5 train just as the doors were closing. I pushed my way through the wall of people, blocking the doors and empty seats. It was the middle of the afternoon on a weekday, prime train time, apparently. I put my bag on the floor and squeezed between two shoulders on the bench. I wasn’t dying to sit down, I just figured I’d take up less space that way. The doors shut and the automated train announcer politely requested that we stand clear of the closing doors.

Before the train made its first stop, someone started yelling from a few bodies over. I couldn’t see any faces, but the intonation was clearly argumentative. I noticed a few bystanders shuffling around through a crowded deck of cards. The scene unfolded before me. A mother, her young boy, and a homeless man grappled in close proximity. The mother had lifted the child of the bench and into her arms, claiming the man had been sitting “too close to him.” The man claimed that the bench was simply crowded, but the mother wouldn’t hear it.

At this point her voice surpassed any comfortable decibel level as she began to deliver a round of diatribe to the “alleged offender.” A series of fight words escaped her mouth, a form of speech that is not protected by the first amendment. The fundamental difference between the two of them lay in their status. This woman, who later declared herself as pregnant, married, and “not living on welfare,” was quick to belittle the homeless man, labeling him a “bum” and encouraging her young boy, who could barely speak, to do the same. The man sat across from her, mumbling a small response when he could get one in. A heavy silence fell over the rest of the train car. People averted eye contact, ears up. I’ve always been taught to stand up in situations like this, we all have. But getting involved at this moment seemed like the last thing anyone should’ve done.

A lot of things were going on – people were moving out of the way and speaking loudly with their eyes, the train was decorated with racial slurs and threats as it vehemently chugged along. The mother continued to go against any maternal stereotype as the man sat quietly. She felt the need to assert her independence, despite her womanhood and obvious pregnancy. In another context, I would’ve found this respectable, but not in this one.

If this woman was as settled as she claimed to be, then why did a man carrying a cart full of plastic bags threaten her so much? If she was really happy with the husband and the warm bed she claimed to have, why was it necessary to yell this for the whole train to hear? If she always dressed her children in brand names and expensive shoes, then what was she teaching her young child about people who have the ability to do so?

As far as this woman was concerned, the homeless man who sat before her was nothing more than the “trash” he was carrying around. To the shock of the bystanders like myself, she wasn’t joking either. As the train rolled up to 86th street, the mother did the unthinkable. She spat from across the aisle, directly at the man who continued to sit across from her.

On instinct, the man erupted and all at once, stood with a raised fist, moving with momentum toward his verbal attacker. This is where the audience members were called to become interactive. They pushed the man back into his seat calling out, “she has a baby,” “what are you thinking?” “What’s the matter with you?”

At this moment I exited the train and felt extremely overwhelmed. For a generation so enlightened and politically aware, how is it possible to address someone so disrespectfully? I instantly started looking for a moral. Where’s the wisdom, what can I learn from this? An uptown 5 train rolls out of the station every few moments, there must’ve been a reason this combination of people all happened to have landed on this particular one.

An analysis of this interaction showed me that the center of the argument revolved around status. A woman with a family and a salary was the bully and the antagonizer, against a man who, despite what appeared to be a last resort of self-defense, was pretty much helpless. Although externally, the woman seemed to be fine, internally, there was much for her to work on.

What’s the purpose of money or status if we abuse it? I’ve never truly realized that there is no such thing as equal rights. How could something like this take place for so long? It is unlikely that a male could get away with yelling at a female in public without someone interfering. It is unlikely that a homeless person could get away with attacking a person of status without interference. If the roles were reversed, the train would’ve stopped, the police would’ve come, and the whole world would’ve stopped. Well, not exactly, but you get my point.

Of course, this isn’t news. I walked up Lexington Avenue in despair. For me, this was a huge wake up call, and the only way to fix it is by spreading awareness. People are people, and this is real life. Later that day I saw a group of women marching for their rights. I gave a homeless person a dollar, and I gave over this story to everyone I knew. I took control in the only way I knew how to – through discussion and education, through peace.

I thought of the women on the train who approached the mother and started speaking to her about her child. She commented on how adorable he was; she asked his name, she asked his age. The mother was proud to answer. She was proud to speak about her son. The innocent child sat quietly in the arms of his wailing mother, peacefully looking around. Sweet and new to the world, I thought about the path that was being carved out for him. I had hope for him. I still do.

The conceptual idea of status is abused and paraded by many. It takes an enlightened person to understand that what you have doesn’t define you. Parents teach children to be empathetic and kind. We’re remembered for what we do, not for what we had.

One who is truly content with who they are could’ve walked away from a provocation like this, calmly and quietly. A homeless man on the subway should not be seen as a threat, but as an opportunity to bestow kindness upon another human life. Love and compassion should not be limited to only people of similar means. An internal belief of equality should manifest its way into our behavior and our treatment of others. The world owes us nothing, but we owe it everything.