Why Palestinian President Mahmoud Abbas’ Grandchildren Give Him Hope 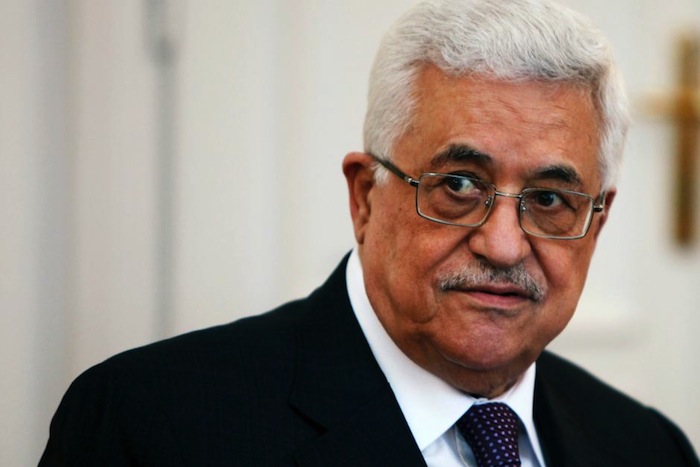 On Monday night I had the honor of being at a dinner at the Plaza Hotel in NYC hosted by The S. Daniel Abraham Center for Middle East Peace billed as a “conversation with Palestinian President Mahmoud Abbas and Jewish American Leadership.”? About fifty people attended: Palestinian leadership, American political leadership including Martin Indyk, Special Envoy for Israeli-Palestinian Negotiations, and former Secretary of State Madeline Albright, Jewish organizational leaders, and American Jewish notables including Professors Alan Dershowitz and Daniel Kahneman, Noble Prize recipient, and Abby Joseph Cohen of Goldman Sachs.

The meeting was essentially an opportunity for Palestinian and American Jewish leadership to bolster each other’s confidence in the newly revived Peace Process. There was an undertow of desperation and surrealistic d?j? vu because in 2010 and 2012 the exact same meeting, in the same place, and on precisely the same issue was held. Noticeably absent this time, however, was anyone from Orthodox organizations or from the more right of center powerful defense agencies AIPAC, the Anti-Defamation League, and the American Jewish Committee. The official reason for their collective absence: scheduling conflicts.? I wonder if their absence reflects the deep split – much like in America in general – between those unwilling to “trust” in a process with “enemies,” be they the Palestinians, Syrians, Russians, or Iranians and those willing to “trust”.

The dynamic for the hour and a half conversation was American Jewish leadership repeatedly asking President Abbas for assurance that he and the Palestinians really do want peace and Abbas reiterating in different ways that “the Palestinians are fully committed to the peace process so that we can reach a final settlement that ultimately will lead to the creation of an independent Palestinian state that would live side-by-side in peace and security with Israel.”

As I listened it struck me that all we were hearing was the traditional political speak, appropriate policy statements and principles of diplomacy all of which everyone in the room had heard for decades, and could recite by rote. Not one word was surprising. Not one statement touched yet alone moved hearts. I decided to ask Abbas a non-political question:

“Mr. President, my daughters Gabriella and Talia are 25 and 21 years old. They are part of a generation that sees this conflict as an endless cycle of violence perpetrated by people who don’t want peace and peace talks that go nowhere between politicians, diplomats, and public policy experts all of whom in some way have careers dependent on the conflict. Respectfully, I do not believe my daughters would be moved or feel more hopeful after hearing this conversation. Their generation – a YouTube generation – isn’t moved by political speak but by story and image. Can you tell me a story from your own life, can you paint me an image that I can offer them that might touch their hearts?”

Abbas listened to the translation of my question, looked right at me and said:

“I have eight grandchildren some the age of your daughters and six of my eight grandchildren have attended Seeds of Peace*.? My grandchildren tell me, ‘I will go again and again and again.’ They built good relations with Israelis – even with [the] killings. Until now they have these relations. How can we change the culture? If you ask me this question during the intifada I didn’t have an answer. Hatred, guns, killing, it destroyed everything. Now I can say we have something to talk about. When we talk about living side-by-side, many people listen. I send my grandchildren, till now, every year they go there to talk and build good relations. I still have hope. If I didn’t have hope, you wouldn’t see me here.”

There were quiet gasps. Not one American in the room had known that the President of Palestine’s grandchildren had attended one of the most important peace building organizations for young people. Imagine if President Abbas, in his speech at the United Nations later this week, told this story about his grandchildren’s lasting friendships with Israelis – friendships that are a source of his hope for peace. He just might touch some hearts and remind us that governments may indeed negotiate treaties but people make peace.

*Seeds of Peace is a U.S. summer camp program that establishes relationships between youths from Israel, the Palestinian areas, other Arab nations and the United States.