Waking Up Is Hard to Do 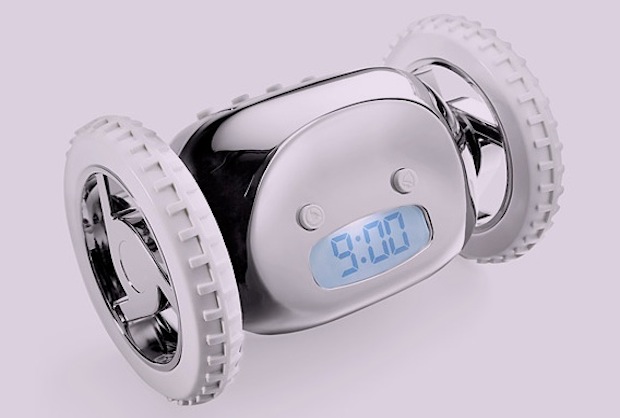 Waking up in the morning is a definite challenge for me. I hit the snooze button more often than I should. At least three times I say to myself, “Okay, time to get up.” I need real motivation to get out of my comfortable bed. That’s why I could really use the product known as Clocky.

According to its description: “Clocky is the alarm clock on wheels that runs away beeping! You can snooze one time, but if you don’t get up, Clocky will jump off of your nightstand up to three feet high, and run around your room as if looking for a place to hide. You’ll have to get out of bed to silence Clocky’s alarm.”

Clocky could prove to be so valuable because, very often, what we plan to do is not always what we actually do. When we go to bed and set our alarm the night before, we’re expecting that when we wake up, we’ll leap out of bed instantly, ready to go. But when that alarm actually goes off in the morning, our best intentions often fall by the wayside.

Millions of Jews around the world are marking a New Year – Rosh Hashanah – by understanding how we stumbled and missed the mark this past year, in the hope of making improved choices that can lead us to become better people. Resolving that we will, for example, “be more patient” in this coming year is a lot easier than actually becoming a more patient person – especially when it’s the twentieth time we’ve had to tell our child to clean up their room.

The resolutions we make about ourselves can be very hard to hold onto when the moment of choice arrives. Indeed, that’s really what we reflect about on the High Holy Days each year – the times when we “missed the mark” when we aimed to do one thing but ultimately did another.

So, how can we do better?

Psychologist David DeSteno examines, in his article for the Pacific Standard, how Americans struggle with self-control. We eat too much, we spend too much, we give into our baser impulses too much. And many of us tend to think that employing cognitive strategies (“You’ve just got to handle your anger better”) is the way to go.

But as DeSteno argues, rather than cognitive strategies to overcome urges, we should use emotional strategies. He gives several reasons and suggestions, but perhaps most importantly, reminds us:

“We often make the mistake of assuming that cognition and reasoning will always favor the most objectively rational, long-term outcome. But in reality, reasoning is tainted by bias; we can rationalize pretty much anything if it suits our immediate needs… I deserve an extra drink, a smoke, a sweet, a break, or a luxury today...”

Instead, DeSteno suggests, we should cultivate emotional strategies:

“These emotions – gratitude, compassion, authentic pride, and even guilt – work from the bottom up, without requiring cognitive effort on our part, to shape decisions that favor the long-term. If we focus on instilling the capacity to experience these emotional states regularly, we’ll build resources that will automatically spring forth in reflexive and productive ways… We’ll be giving ourselves inoculations against temptation that, like antibodies in our bloodstream, will be ready and waiting to combat possible threats to our well-being.“

In the end, the goal on the High Holy Days is to become better people, to use both our heads and hearts to improve who we are. But as humans, our natural tendency is to be drawn towards the path of least resistance. So we need any and all strategies we can find, to make sure our choices help us – and not harm us – on our journey.

But all too often, we are likely to hit the snooze button. So for this year’s attempt at becoming better people, maybe willpower isn’t the best strategy. Instead, let’s not be afraid of any tools or tips we come across – or even tricks – to help us grow.

And if we do that, perhaps we’ll have just a little less trouble waking up.

This post was originally published on My Jewish Learning’s “Rabbis Without Borders” blog.