The Wisdom In Carroll’s Nonsensical Poem, The Walrus And The Carpenter 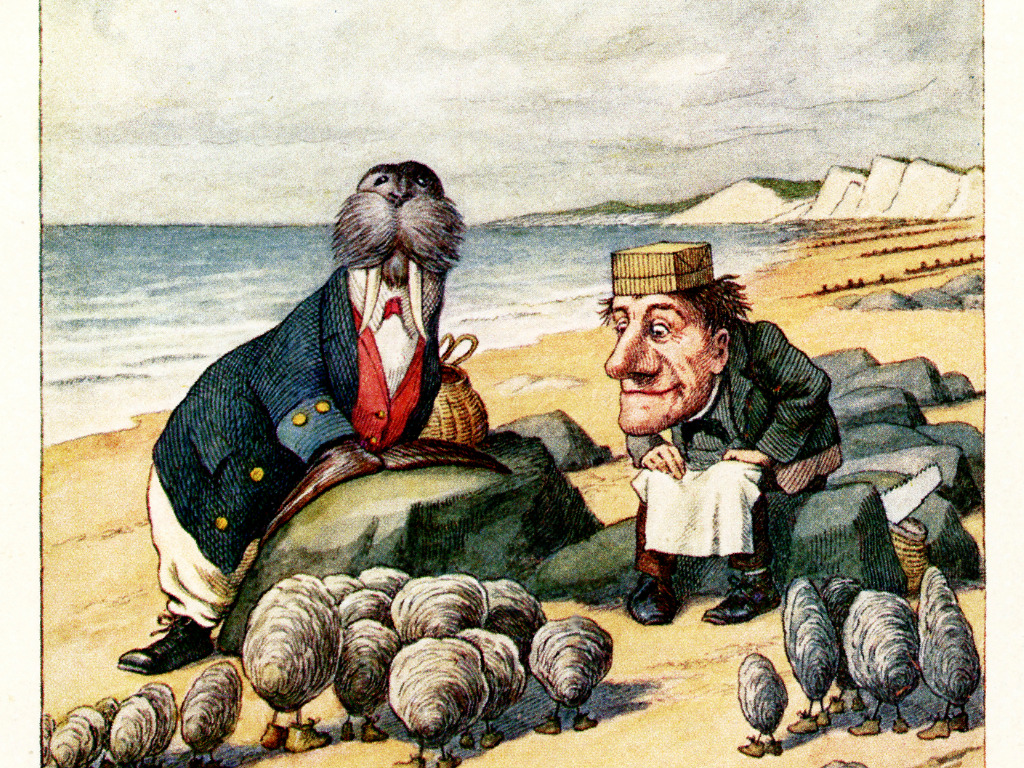 -The Walrus and The Carpenter, Lewis Carroll

When asked to recall a poem or a song from childhood, I recall the above verse from The Walrus and The Carpenter by Lewis Carroll. (For the sake of understanding this piece, it may be beneficial to read or skim the full poem). These words take me straight to the scene from Alice’s Adventures In Wonderland where Tweedledee and Tweedledum recount the tale of the Walrus and the Carpenter walking side by side as the little, helpless oysters, trail behind them.

As a child listening to the sing-songy tune of the poem’s iambic pentameter, I could not help but feel disturbed by the themes of trickery and selfishness strewn across the poem. Yet, there was no reason to address or overthink any of the negativity in the story. While this poem bears a heavy load and to the literary critic, demands to be unpacked, it is actually dripping with intentional nonsense, and maybe that’s the way it’s supposed to be.

The story follows two characters as they walk together on the shore on an evening where the sun and the moon are both visible. The scene from the movie, which slightly differs from the actual poem, does a better job at depicting the motives of the Walrus and the Carpenter. The Walrus, portrayed as a distinguished, heartless individual is clearly out to feast on as many baby oysters as he can. The Carpenter, although driven by a common motive, is clearly not the brains of the operation. The two plunge into the sea to coerce the oysters to join them on an “adventure.” While the baby oysters are warned by the eldest oyster not to go with the Walrus, it seems that they are unanimously taken in by the chorus of the poem:

The oysters jump to their feet and cannot help but follow the Walrus and the Carpenter for “a mile or so” down the shore. It is with great excitement and ignorance that they follow along — enchanted by the nonsense of the Walrus’ Siren Song. And suddenly, it is too late…

“O Oysters,’ said the Carpenter,
You’ve had a pleasant run!
Shall we be trotting home again?’
But answer came there none —
And this was scarcely odd, because
They’d eaten every one.”

While some may say this poem is the very reason your mother told you not to play with your food, I find myself caught up in the nonsense of the story itself. What is the significance of the Walrus and Carpenter, and what exactly brought these two characters together? Why is the Carpenter the only human in the story? And why does he lack the morality to tell his animal counterpart that it isn’t polite to con small creators into “joining you for dinner?” And why is the most nonsensical verse of all the one that convinces the oysters to leave their warm oyster beds for an unfortunate demise? Even more so — why does the wise oyster let the young oysters go in the first place? Why didn’t he/she put up more of a fight?

The imagery this story provides may act as a distraction to the reader, yet some have tried to attribute political, religious, and nationalistic ideas to the Walrus and the Carpenter. In fact, Carroll seems to set up a type of mad world where everything is just a little bit upside down and backwards. These ideas are described in the poem’s earlier verses, before the two protagonists enter, stage right:

The moon was shining sulkily,
Because she thought the sun
Had got no business to be there
After the day was done —
“It’s very rude of him,” she said,
“To come and spoil the fun.”

The sea was wet as wet could be,
The sands were dry as dry.
You could not see a cloud, because
No cloud was in the sky:
No birds were flying overhead —
There were no birds to fly.

The sun and the moon shine at the same time as Carroll states ironically that yes, the sea was very wet, the sands “dry as dry.” The birds are absent, perhaps because birds do not often fly at night. The clouds are absent, perhaps because there aren’t often clouds when the sun shines its brightest. Amongst these contradictory clauses, the author introduces this unlikely duo with no further introduction. Of course, the fact that they’re walking “close at hand” establishes a sense of closeness in the relationship. One does not walk close at hand with just any walrus.

As the young oysters leave their oyster beds and follow along, even a child reader could predict that these creatures have quickly become prey. Of course there is plenty of analyzing we can do at this point. We can speak badly of these two hunters, man and beast walking side by side, beast seemingly in control of man, as opposed to the other way around. We can summon feelings of sympathy for these young oysters, who are literally walking to their death. We can view the Walrus as a conman who, if you look at the poem, initiates his feast by once again delivering the following iconic speech to the oysters,

“The time has come,’ the Walrus said,
To talk of many things…”

No literary critic can argue the nonsense of this stanza. At this critical moment, the reader is forced to give in to the ridiculous situation Carroll has presented. This poem epitomizes nonsense literature: a literary genre which combines elements that make sense with those that do not. By skewing the logic and natural expectation of the reader, one is left not knowing what to expect from the work.

We find these ideas most notably in children’s stories, fairy tales, and nursery rhymes. Children’s stories are filled with nonsense, almost definitively. We see eggs falling off of walls — a tisket here, a tasket there, and three or so blind mice. When it comes to these stories, if it rhymes, it works. This may be the rule with the Walrus and the Carpenter as well.

In the Annotated Alice, coauthor Martin Gardner tells the story of the Carpenter’s fruition. When Lewis Carroll gave his manuscript to illustrator John Tenniel, he gave him the option of drawing either a carpenter, a butterfly, or a baronet — as each word would fit the poem’s metre. Rumor has it that it was not Carroll who chose the Carpenter, but Tenniel. Therefore any symbolic interpretations of the Carpenter are rendered null. The Carpenter offers no significance to the poem other than his three-syllable convenience. This begs the question: what else may be this way?

This cautions the reader not to overanalyze or look for symbolism where symbolism does not necessarily exist. Carroll claims: “The Alice books were made for the imagination of children and not for the analysis of “mad people.” This ideas seems to suggest that sometimes man is overly curious. We have a tendency to search for the deeper meaning of a text as opposed to taking it at face value. To quote Tweedledee and Tweedledum, “The oysters were curious too…”

Yet, as adults, we’re forced to recall these hazy tales that drip with nonsense and jest as staples of our childhoods. What can we make of this? Are we meant to shut off our overly critical minds and simply bask in the nonsense? Is it possible to enjoy a story at face value without wondering what the author was really trying to tell us? Perhaps this is the literary world’s way of telling us not to take life too seriously. Sometimes it’s okay to sing along to a song even if we don’t know exactly what the words mean. We must keep our curiosity at bay and find comfort where we are in the story, lest we find ourselves eaten for dinner.