The ‘Love Your People’ Facade 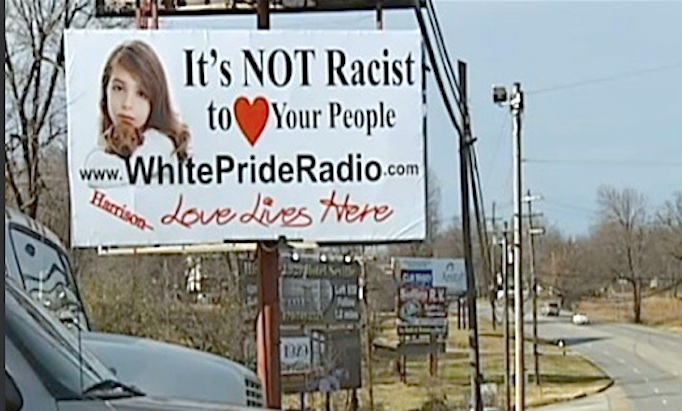 Recently, a billboard in Harrison, Ark., has generated quite a bit of controversy. Funded by Thomas Robb, director of the Knights Club of the KKK, the billboard for WhitePrideRadio.com reads, “It’s NOT Racist to Love Your People.”

Robb’s belief that there is an ongoing policy of genocide against white people is obviously eccentric, though it behooves us to take seriously the anxiety, vulnerability, and cultural and economic dislocation that helps cause sentiments like these to pop up.

On the other hand, he does invite us to think about what it means to have pride in our own tribe, country, religious or ethnic group. Leaving aside whether there is such thing a “White people” or “White culture,” we do have a right to take pride in our particular community’s identity.

It behooves us to take seriously the anxiety, vulnerability, and cultural and economic dislocation that helps cause sentiments like these.

But it seems that a group’s pride is too often generated and maintained by a sense of superiority, and implicitly (if not explicitly), a dismissal of other groups. Genuine pride creates a sense of security, not insecurity, a confidence to engage and share our take – not demonize someone else’s tribe.

Robb is correct in this point: It isn’t racist to love our own culture and heritage. But it certainly isn’t love if we have to hide our face behind a hood of anonymity, a mask of exceptionalism or a cloak of superiority. If you identify strongly with one cultural or ethnic group of people, it’s healthy to consider these questions: