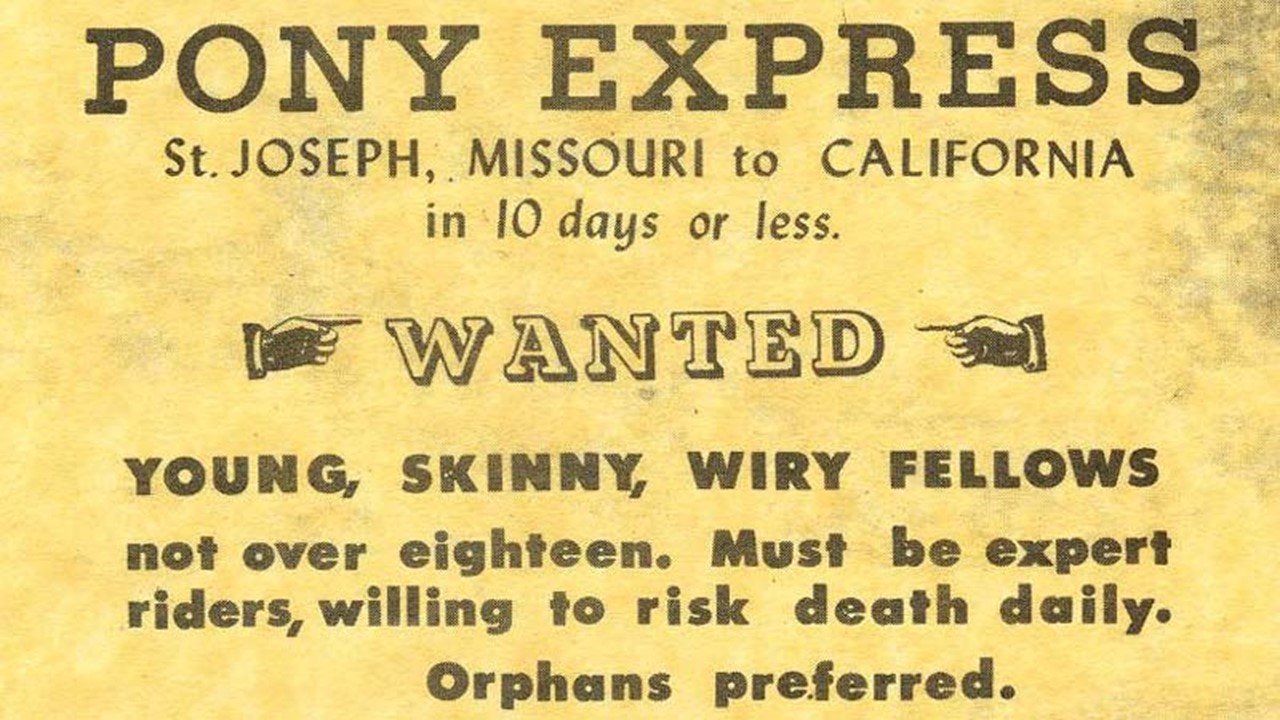 The settling of the “Wild West” by the Americans is often looked on with nostalgia (the violence, murder, cannibalism, unbridled greed, land theft, near buffalo extinction and devastation to Native tribes notwithstanding), and its “heroes” immortalized, thanks in large part to Hollywood. Chief among the romanticized heroes of the Wild West are the riders of the Pony Express.

The Pony Express was a relay mail service that operated between St Joseph, Missouri and Sacramento, California from April 1860 to October 1861.

When California’s population swelled during the Gold Rush, which began in 1848, and its subsequent joining the Union in 1850, a fast mail service became imperative. Prior to the Pony Express, it could take months for a letter to get from the East to West coast.

The service was created and run by the Central Overland California and Pikes Peak Express Company; which was founded by William H. Russell, Alexander Majors, and William B. Waddell, all of whom were in the freighting business. The service used mounted riders, which were quicker and less cumbersome than traditional stage coaches.

The riders took a set route, approximately 1,900 miles long (3,100km), which had specially built or requisitioned stations every 10 miles (16k) or so. They changed horses at each station and rode 75-100 miles (120-160 km), often through the night, before changing riders. It was an ingenious and complex operation of 120 riders, 184 stations, 400 horses, and hundreds of additional workers.

The riders were young, hardy and well paid – receiving $100 per month, an amount exceeding other unskilled labor positions at that time. From its inception, there was a certain prestige in becoming a Pony Express rider; and, upon joining the company, the riders took the following oath:

“I, …, do hereby swear, before the Great and Living God, that during my engagement, and while I am an employee of Russell, Majors, and Waddell, I will, under no circumstances, use profane language, that I will drink no intoxicating liquors, that I will not quarrel or fight with any other employee of the firm, and that in every respect I will conduct myself honestly, be faithful to my duties, and so direct all my acts as to win the confidence of my employers, so help me God.”

Working for the Pony Express also proved to be a dangerous job, due to the ongoing conflicts between American settlers and Native tribes people – the latter being increasingly subject to Government land seizures and forced resettlement. In 1860, fighting broke out between settlers and the Paiute tribe of the Sierra Nevada region. During the conflict, 8 Pony Express stations were raided, which resulted in the death of 16 Express workers and the loss of 150 horses.

The most famous of the Pony Express riders was William Cody (aka Buffalo Bill). According to legend (possibly exaggerated), Cody was on his way west to California, when he ran into some Express agents. He signed up with the company, first helping to build stations along the route, and later as a rider. He went on to gain notoriety when, having arrived at a station to find his replacement had been killed, he carried on riding for nearly 22 hours, over a distance of 322 miles (518km).

It is estimated that up to 500 horses were used during the 19 months the Pony Express was in operation. Chosen for their speed and ruggedness, mostly Morgans, Thoroughbreds and Mustangs were used. The horses were changed at each station, and covered an average distance of 15 miles (24k) per ride.

A special lightweight saddle was made for the riders, along with a distinctive saddlebag, called a mochila (Spanish for pouch), which had 4 compartments for holding the mail. Along with the mochila, the riders carried a revolver and a water sack.

The Pony Express was in operation for 19 months; during which time it was estimated to have delivered 35,000 letters between the eastern and western United States. Replaced by the telegraph in 1861, the Pony Express passed into legend, its riders immortalized by Mark Twain and the popular (yet bizarre by today’s reckoning) Wild West Traveling Show created by, and starring, none other than Buffalo Bill Cody.

Despite its relatively short existence, and the fact it was a financial failure (losing an estimated $200,000), the Pony Express provided an invaluable service – uniting the opposite coasts of a vast continent – still in its infancy in terms of industrialization – and helped foster America’s sense of its own greatness, thus ensuring its enduring legacy.