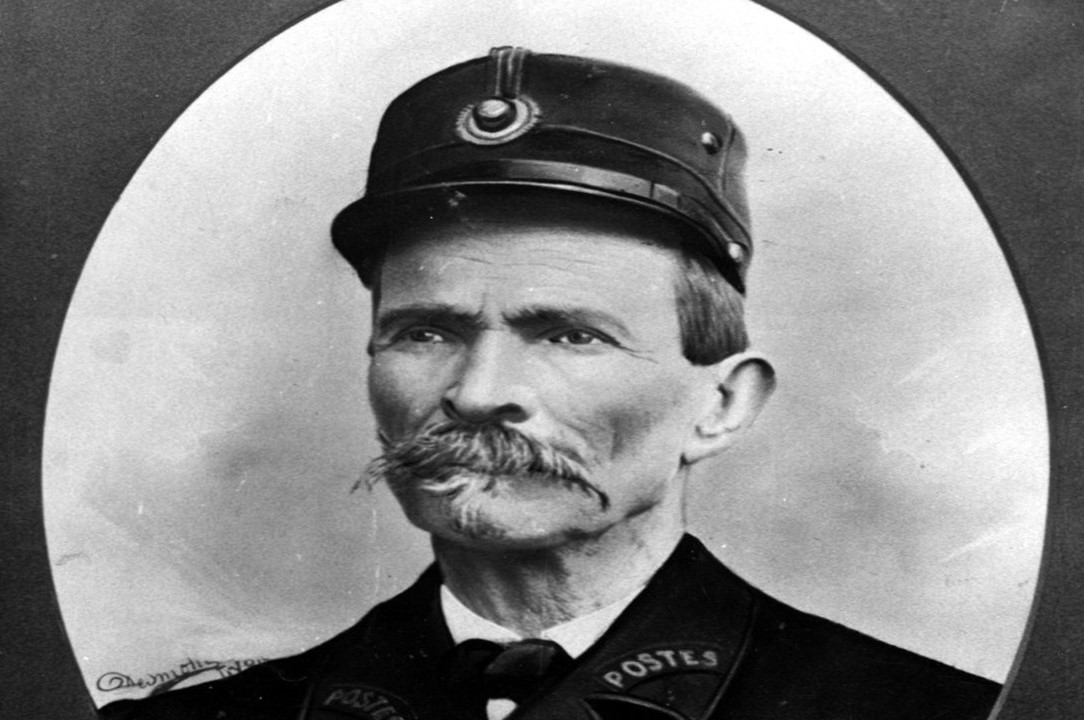 On April 19th, 1879, French Postman, Ferdinand Cheval (1836-1924), was delivering letters on his usual 18-mile post round in the French countryside; when, all of a sudden, he tripped over a rock. Upon inspection, Cheval saw that the rock was bizarre…yet picturesque, so he picked it up, wrapped it in a handkerchief, and took it home. The next day, he returned to the same spot, found an equally bizarre, yet picturesque rock, and took that home as well. So began a daily collection of rocks, which, when he had amassed a sizable pile in his backyard, he began cementing together.

The bizarre, yet picturesque rock.

You see, when Cheval tripped over the rock on that mid-April morning (also his 43rd birthday), a nearly forgotten dream was dislodged from the back of his mind. The dream was of a beautiful palace that he had built with his own hands, a dream that, upon waking, filled him with such wonder and longing, that he spent the next few weeks consumed with thoughts of it. With no idea of how to make his dream palace a reality, all thoughts of it eventually faded away, and life continued; until, almost a decade later, a bizarre, yet picturesque rock appeared on his path. When he inspected it, he recalled the dream of his palace, and realised that all he needed to begin making his dream a reality, was that one rock.

Since Nature is willing to do the sculpture, I will do the masonry and the architecture.

From that moment on, he continued without rest to collect rocks and take them home. Initially he carried them on his back; but as his collecting reached fever pitch, he employed the use of a wheelbarrow; a wheelbarrow he came to love as a faithful companion.

Cheval and his faithful companion.

The first thing he built was a fountain, which he called The Source of Life. It took him two years to complete, due to its ornate decoration of concrete animals, which he described as:

A hymn to the wonder and majesty of nature.

The east façade, including the Source of Life fountain.

He then made a cave in honour of St Amadeus, the patron saint of Hauterives, the little town he lived in; and next to that he made another fountain, which he called The Source of Wisdom. He then began work on an Egyptian style tomb, which he hoped to one day be buried in; he also wanted his wife to go in it with him, though it is not known how keen she was on the idea.

Of all the features of his construction, the Three Giants are the most striking and best loved. Reminiscent of the statues on Easter Island, the Three Giants, to this day, stand guard over Cheval’s faithful companion – his much-loved wheelbarrow.

Rising above the entire structure is the Tower of Barbarism, which was built as reservoir to provide water for The Spring of Life. Surrounding the tower are various trees and plants, including, olive, palm, prickly pear and aloe.

The Tower of Barbarism

The west facade includes such wonders as an oriental pagoda, Hindu temple, Swiss chalet, medieval castle and mosque, all exquisitely decorated with flora and fauna from all over the world. The inspiration for these far away marvels are said to have come from the postcards and travel magazines Cheval delivered on his post round.

His most impressive fete was the spiral staircase, leading to a platform that provides a view of the surrounding area. The staircase is evidence of Cheval’s talent as an engineer, something he received no formal training for.

Below the staircase, Cheval inscribed the time it took him to complete his masterpiece:

Let any man more obstinate than me get to work

Initially, Cheval called his masterpiece Seule au Monde (Alone in the World), but later changed it to Le Palais Idéal (the Ideal Palace), in honor of a poem Emile Roux-Parassac wrote after seeing Cheval’s beautiful work:

This is art, this is a dream, this is energy.

Then, in a burst of enthusiasm:

our Palace, with its superb Ideal.

During the 33 years it took Cheval to complete his Ideal Palace, French law no longer permitted burial on private property; so, rather than relinquish his dream of being laid to rest in a sepulchral of his own making, he began building a separate structure in the local cemetery. Taking a further 8 years, Cheval completed it at the age of 86, and gave it the poetic title: The tomb of silence and endless rest. Indeed, he rests there in silence to this day.

As one might expect when the local postie builds a monolithic structure in his garden, Cheval’s palace drew attention from far and wide. In the beginning his building was met with a mixture of wonderment and derision, with those of the latter opinion thinking he was quite mad. Cheval, unperturbed by his detractors, continued to realise his internal vision, sure in the knowledge that its completion would ultimately be a source of inspiration. And, so it was. Chief among his admirers, were Pablo Picasso and Surrealist artists, Andre Breton, who visited the palace several times, and Max Ernst, who made a collage in his honour, called, The Postman Cheval.

Cheval’s palace came to be recognised as the forerunner of Naïve Art, which is described by Jean Dubuffet – the initial proponent and cataloguer of such art:

Work realized by individuals who have no artistic culture…[and is] contrary to what happens in the intellectual world. [An art that is] pure, raw, entirely reinvented by its author from his own passions.

In 1969, Cheval’s Ideal Palace was protected as a cultural landmark by the French Minister of Culture, André Malraux. Such official recognition of his life’s work would have meant a great deal to Cheval, as would the 120,000 or so visitors to his palace each year.  What began as dream and an accidental stumble a decade later, and led to a humble postman dedicating the latter half of his life to the realisation of that dream, has become a source of wonderment and inspiration to many. Not just because of its visual splendor, but, because it teaches us that within all us lies the ability to realise our dreams, no matter how fantastical. All we need do is begin.