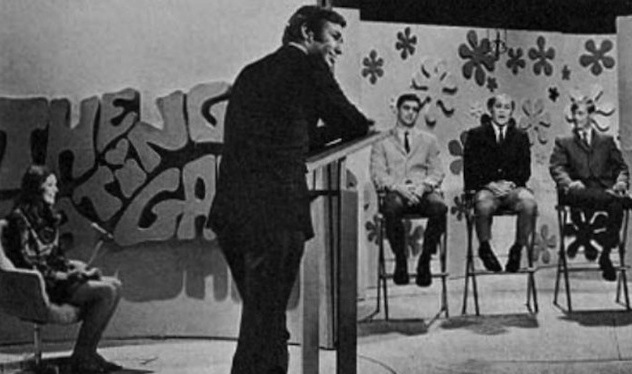 Jim Lange, the host of the 60’s and 70’s hit TV show The Dating Game, died this past week. In an era when women were expected to wait for men to ask them out, The Dating Game was seen as progressive and even a bit risqu?.

Each week a woman would question three members of the opposite sex hidden from her view but visible to the audience. Based on how wisely and engagingly (and how gently racy) they responded, she would decide which one would be the best date. The couple would then receive a “chaperoned” trip to some exotic place like Miami, Hawaii, or Tahiti (remember this was the 60’s).

Because the woman couldn’t physically see the men, the initial attraction and chemistry had to be based on the conversation – on some psychological, intellectual, and spiritual intuition. We viewers rooted for the guy we thought would make the best match and more often than we probably would like to admit, took the guy’s appearance into account. The climax of the thirty-minute show was when the couple would see each other for the first time -? they (and we) would immediately sense whether their physical attraction matched up with the sparks of their repartee. Every few months or so Lange would report on a couple that actually wound up in a long-term relationship.

These days we have The Bachelor, Internet Dating Sites, Speed Dating, and the most recent dating app phenomenon Tinder which finds you matches based on your location, lets you scroll through pictures (no lengthy profiles here), and if two users swipe “yes” to each other, then off they go texting through Tinder’s interface. I am not sure we have progressed very much since The Dating Game, which understood that chemistry is a combination of factors including sexual tension, intellectual engagement and emotional connections.

Do you remember what initially attracted you to your spouse or partner? Do you remember the first conversation you had? The first time you saw each other? What do you think the relationship between attraction to someone’s mind, heart, and body is? Does it change over time?