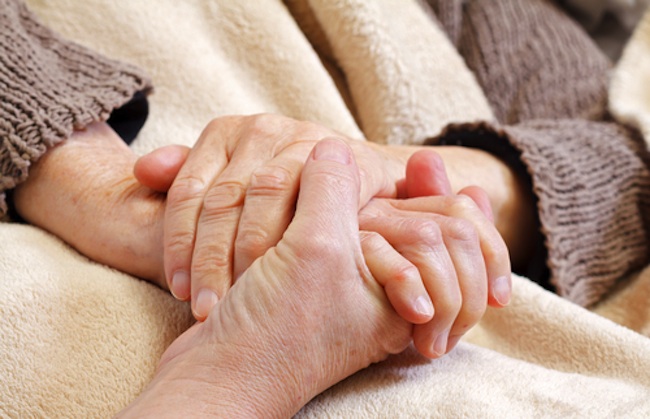 I walked into the living room of one of our close family friends. Sitting quietly were my friend’s 89-year-old father and mother. Just a couple of hours earlier, they had heard from a cardiologist – unfortunately, in a rather sudden and impersonal way, with no family around – the prognosis on how long he had to live, given his heart condition. There was a mix of sadness and fear. My friends, understandably, didn’t know exactly what to say. Who does?

Over the years, as this family’s rabbi, I had shared many happy times with them all. As I walked over to Sam, he gave me a knowing, warm smile. Despite the debilitating heart disease that had weakened and depressed him over the last couple of years, he still possessed a joyful eye, wit, and a questioning spirit that would be anyone’s envy. I bent down, put my hand on his heart and gave him a kiss. And not making believe everything was okay, I said, “Sam, I know you heard really hard news today. We are all sad and scared. Let’s talk.”

“I know you heard really hard news today. We are all sad and scared. Let’s talk.”

Over the next 40 minutes, I never took my hand off his heart while Sam talked. He lamented, he complained, he was grateful, he grumbled, he laughed, he protested. At one point Sam looked directly at his wife of more than 60 years and said, “The only thing I really fear about dying is not being able to take care of her. I was nothing before I met her.” His son, sitting on the arm of his father’s chair, promised with such heart and certainty to make sure his mother would be taken care of that the fear literally melted away.

Sam also made sure to question god – a god we agreed did not exist. This not only made him laugh, but he told me, “Now I respect you even more than I did.” As we talked, his granddaughter entered the room. I’d held her at her baby-naming more than 17 years ago, and I’ve watched her grow up to be so bright and beautiful. She knew what was happening, and slowly came over.

The joy on her Poppy’s face when he saw his granddaughter was palpable. “What do you want your Poppy to know?” I asked her. Her eyes opened widely, she sat down on his lap, put her head on his shoulder, looked into his eyes, and said, “Poppy, I just want you to be happy.” Pearls of tears cascaded down her cheeks, meeting those rolling down her grandfather’s. With my index finger, I touched those mingled tears. They were liquid love.