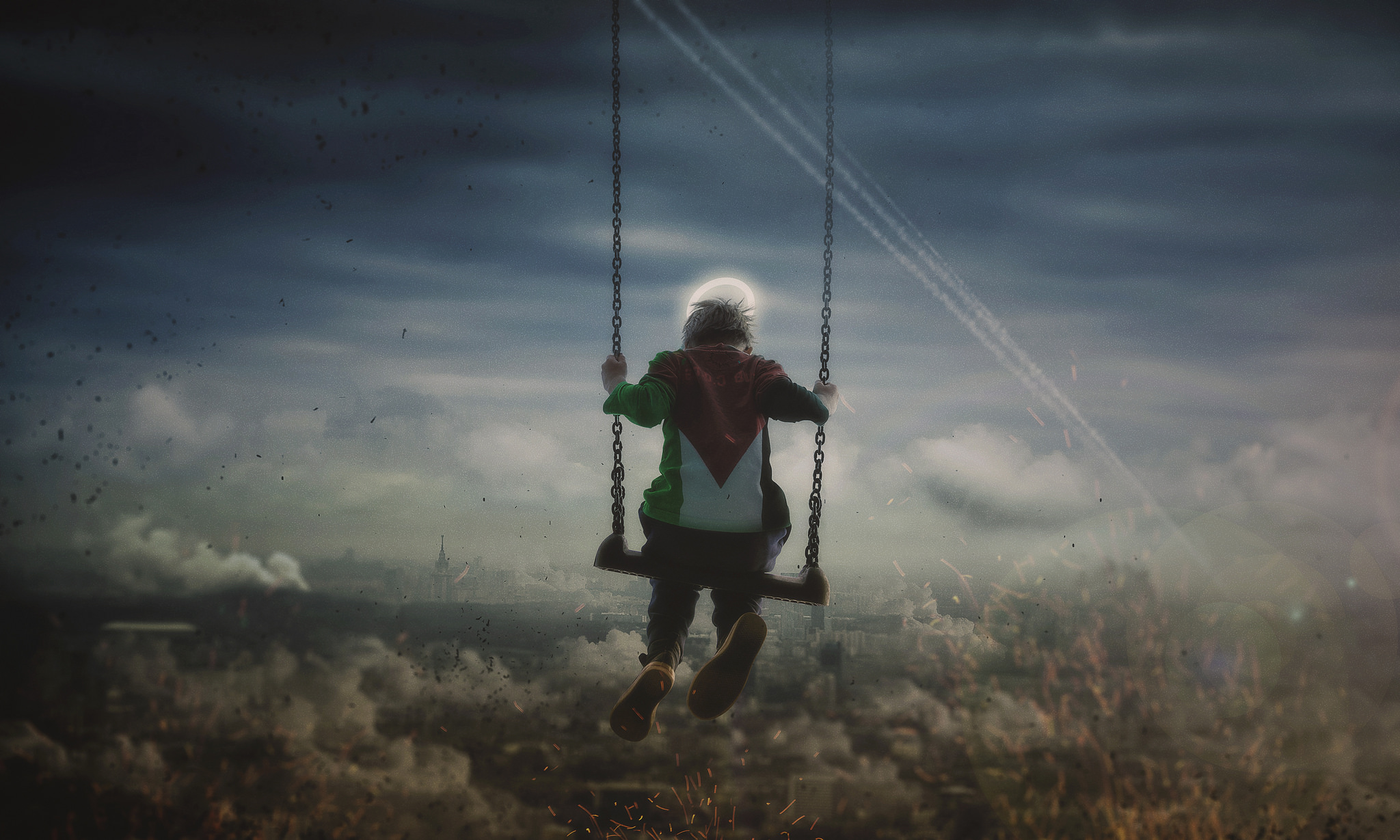 The world is turning faster and faster and faster, and so many of feel as if we’re about to fall off the carousel. We are shocked at the spin, and cannot find our footing. For, surely, this has never happened before. Surely, we are the first ones to stand at the edge, and look down and down and down, and not know which way to walk in the falling fog.

But as one versed in history, I find myself seeing a repeat of history. We are not the first ones to open our eyes in confusion after a long sleep and realize that a war has broken out and we are caught in the middle, walking between the exploding shells, in search of sanity. We are going to realize that neither side welcomes us wholly, for they are seeing with but one eye. We gouged out our second sight long ago.

We must accept that we must live through our own evils, and do the best we can through them, do the best to find our lost eyes, like Lucia’s, borne up in the chalice of sacrifice out of love. To accept pain, in our own lives, out of and through empathy for the other. To realize that suffering, and indeed the wider confusion of our world, is still…redemptive. Clarifyingly so.

This conviction is all the more so as a writer, that my place here is supposed to speak over the din, or through it, as one is in the world, but not of it. It is the necessity to talk even when it hurts to talk. Because writing is talking, and we use our symbols and signs in such a way to say everything that is most important to be said in those moments when everything seems lost to us. And when everything else melts away, and we think the whole world has crackled up in the fire, and we’re trying to see through the smoke, those things will be the stars we find, the stars that strip us raw for the crush of the crossbeam, and heal us through its heat, turning us into Lightworkers when the sun goes into mourning.

That, perhaps, is why I connect to historical figures who found themselves not so much applauded as despised, misunderstood and maligned, left behind by a history which dictated its rights and wrongs by the fickle whims of men. Perhaps their lack of political savvy, their lack of “business skills,” indicated a depth of treasure which the world despises. Such a man was King Henry VI of England, who lost his kingdom and his life during the chaos of the War of the Roses, but lived a life embracing the higher realities of spirituality, artistry, and the struggle to implement social justice and humane treatment in his realm.

By the standards of the world, he failed in everything he tried. He was too naïve, too trusting, an idiot perhaps. Rotting in a common grave, his memory became eclipsed by the “great” kings, like his father Henry V, the warriors with brute strength and blood on their hands, who made themselves hard and callous and cruel. And yet whose music lives on most clearly, and touches us down through the ages? When Christmas comes, and warm breath whispers secrets to the cold, whose voice lives on through our King’s College Choir? And what, in the end, makes the hearts of men seek their source?

Is that not the end of all things, perhaps? That we’re all thinking about this or that thing in the daily grind of it all, but if we can have even moments where we do find out the way things “are,” in the presence of eternity, perhaps we would know the greatest reality, and then we could change the world by simply “living it.” Perhaps the Beatitudes would then come to mean something more than passing phrases, and the rattle of our prayer beads become more than idle noise. It would shape our souls, and rattle our consciences, and we would live in that rose garden, and our noses would smell the blossoms even as our hands felt the thorns.

If life is measured in weight of worth, it’s not the accomplishments everyone makes so much of. We could die in the dirt, and it would be gold, if only we could see through to that reality – that state of focus which transcends. I believe that is what martyrs feel, through the fear that blankets them, while making the ultimate show of fidelity. For people often ask how someone could die for abstractions, but sometimes I wonder if abstractions are not the “real” thing, for they must be rooted in souls.

Love must have its source, its object. And that is what we see people losing track of. That is what people are failing to see. They cannot see through their own heart’s blood, because it has grown dark, and they think it is so different from other people’s. It’s like we’re lost chasing each other around, grabbing at our petty securities or sanctuaries, and we’re forgetting that we are skimming the surfaces and ignoring the simplest realities of love that people appeal to poetically but never “live.”

Powers rise and fall. We’re only here for a test. It’s not home. When I’m quite dead, I hope to find my way home. But I don’t seek a home here, not really. I am homesick for a place I have never seen. No, more than a place. A reality I have never known, and yet which I was molded to know, and which I have caught glimpses of in everything and nothing…a knowing beyond knowing. That transcendent reality that made the greatest theologians say that all their words were as unto dry straw by comparison.

In the meantime, we live the best we can. We love as much as we can, come wind or weather. I don’t have a death wish, or a delight in pain: physical, emotional, or otherwise, but sometimes I feel that death tomorrow or 80 years from here means fairly little, and the difficulty of the trek is inconsequential, if we are meant to trek it. Some say this way of thinking seeks to simplify the complex or make easy the hard. The answer is yes and no. It is not so simple, not so easy. And yet, it is what we must do. It is, and that is all. Tell me, if you can, if that is simple or complex?

God, do what you want with me! That is all that can be said. Here I am, Lord, mourning and weeping in this valley of tears. Send me where you want me to go, to the ones who need me most. St. Theresa of Avila said, “Christ has no body now but yours.” Maybe to the heart of the insanity I must go, if that is where the call leads; maybe that’s where I need to be. Maybe I need to be here to pick up the fallen, shattered pieces of this world. Maybe broken glass and torn flesh are my lot.

Who knows what the future may hold. I have no plans in this realm of existence that cannot be altered. Madness is upon us, yes, and always has been, in one form or another. Our world is beset by it, and we feel we may be lost in it. But we are to live in the madness, and face it armed with a madness of our own. We are to be lunatics of love, loving where love seems to have no home, speaking truth where truth is but a distant memory. We must speak love to the face of fate, descend with it into the hollow of hate.

We are supposed to be lights in darkness, even if the darkness recognizes us not. Even if, in opening our arms, we find them pinioned back. Let us be mocked and jeered as village idiots to the worldly wise. For those who see too clearly are always called insane. But through their torturing of us, are we not granting them the opportunity to be freed?

Maybe it’s a matter of feeling like an exile in this world already. Like the world feels really blurry to me. Unreal, almost. Like we all think we’re so smart, but we’re missing the reality beyond the curtain. So we spend so much time on our little games, and think ourselves in control. But when the game is up, and our turns all spent, will we then realize that we lost our true chance to know reality uncluttered by our petty shows?

Realizing that does not mean giving up on life. On the contrary, it means embracing it more fully. It means recognizing how precious it is, amidst the insanity, and knowing that the road we tread does not end in the desert, but the mountains. I suppose by seeing through to individuals more than the structures we built. All this temporal are temporary.

Yet still, we are strangers here. We are the exiles, the outcasts, the refugees, the rebels fighting uphill, “with battles that we hardly win and souls we hardly save.” J.R.R. Tolkien called it “fighting the long defeat.” In a sense we must always strive, with the knowledge that our world will never meet the height of our expectations. Hence, we remember that we are ashes and dust, swirling through our journeys, and scanning the horizon for a sign of a home deeper rooted in the heart than any earthly root.

We cannot control the grand scheme of things. But in the long run, it will be the little things that carry the most weight. And when the surge of history has rolled by, we will find the shells nestled in the soggy sand that poured out the waters of blessing. We will see the star-fish that guided us and the jelly-fish that stung us, and all the sands will be gold, and waters, receding apace, will throb with the heart-beat of the moon, turned red with the blood of martyrs. And then we will know. And then, in the fresh breath of a newborn world…we will know, and we will sing.