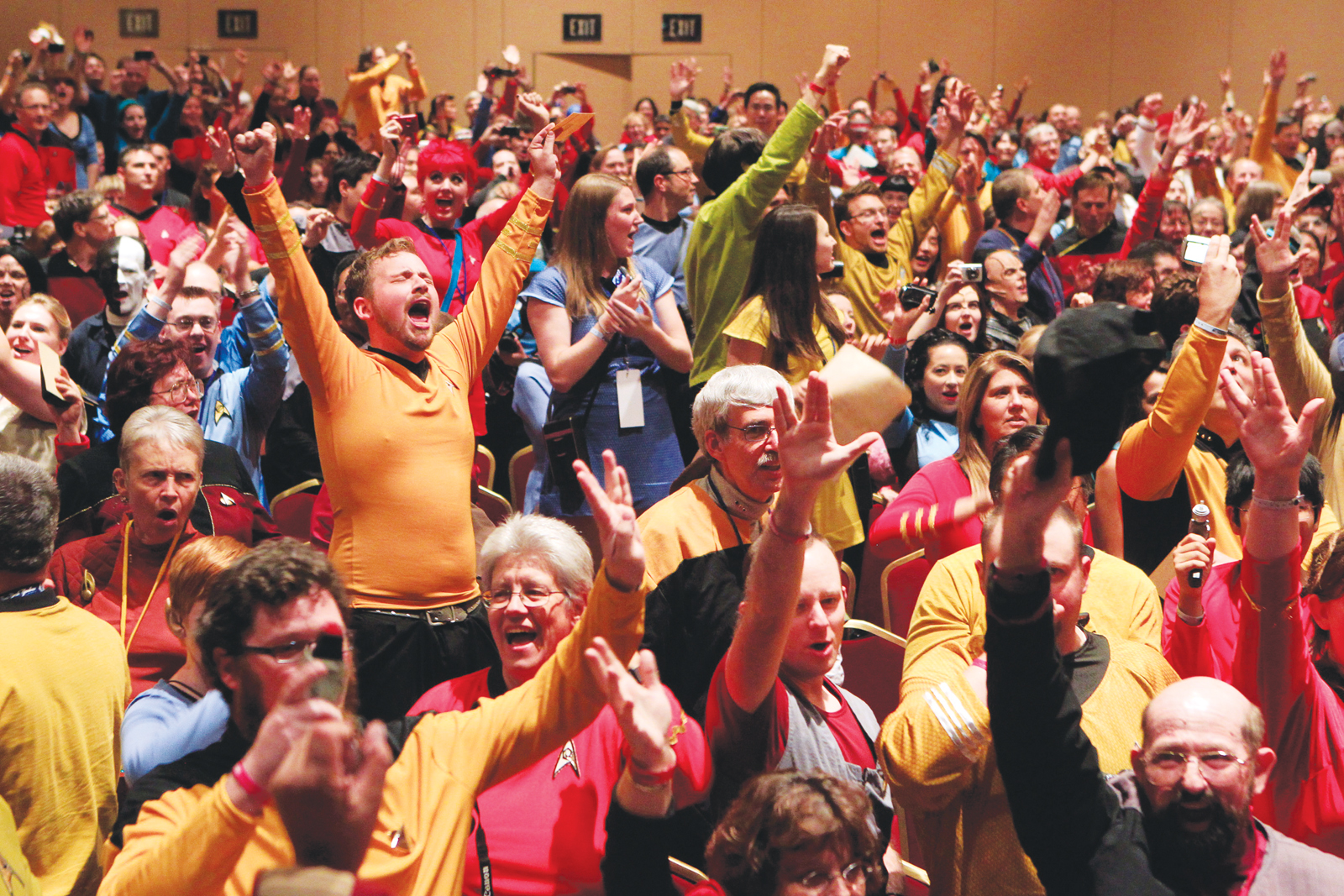 A Star Trek convention is a big tent, maybe the biggest there is.  People of all races, religions, abilities, disabilities, countries and generations come together to celebrate Gene Roddenberry’s vision for a more peaceful world.

I was one of them.  Attending my first conference in New York City on the Sunday of Labor Day weekend, I didn’t know what to expect.  I’ve been a fan for years, but don’t own any costumes or memorabilia aside from three coffee mugs.  Waiting in line with friends to enter, people started talking to each other: was this your first conference, what’s your favorite series, what speakers do you want to hear; and complimented those in costume.

Sure, I came to hear Walter Koenig (Chekov) and William Shatner (Kirk), as well as Kate Mulgrew (Janeway), but I was amazed and fascinated by the atmosphere of the convention.  I saw so many different types of people – a blind man with an aide, people in wheelchairs, a man trying to coax an autistic boy onto an escalator with people waited patiently behind, young kids with their parents, and people in their 70’s and 80’s.  An anti-harassment policy was posted on a huge screen.  Even though I live in New York with all its diversity, I felt part of something even greater.

At the panels, I listened to women in their 30’s talking about how Captain Janeway showed them they could have a career in science, how they could be leaders, and how STEM programs grew because of the casting of a woman as captain, as well as several other women in Star Trek – from Lt. Uhura and the first inter-racial kiss to Seven of Nine trying to become human again after being captured by the Borg.  Kate Mulgrew joked about how she was the only captain to receive so much attention over her hair styles. A NASA astronaut spoke of being Asian-American and how Sulu affected his career choice.  Star Trek was and is much more than a television show.

Star Trek is celebrating its 50th anniversary, and there have been aliens from the Borg to the Klingons and everything in between, but somehow we want to keep exploring what’s out there – to literally discover strange new worlds.  While I probably won’t get to outer space in my lifetime, I go there each time I watch an episode.  For an hour, I watch us work out our human problems on some far away planet; I watch everyone on the crew, no matter their race or gender or other distinguishing features, work together towards the goal of what a more civil society could be.  There are still enemies, and the question is always: will the prime directive be broken or not – and the answer is always that we can move beyond our borders.

Perhaps Star Trek in the 1960’s was the original disruptive innovation.  Television was very white and male when I was a kid.  I rarely saw actors of color or characters who were Jewish.  Star Trek introduced me to a different world.  When I found out that the actors who played Captain Kirk, Mr. Spock and Mr. Chekov were Jewish, I was even more hooked on the show.  And to see even more diversity on the later shows keeps me watching re-runs.

There is a new series coming in 2017, and I’ll be watching.  Star Trek shows me that it’s always possible to think beyond ourselves, our small planet, and our boundaries.  It urges us to reach for the stars, no matter who we are.