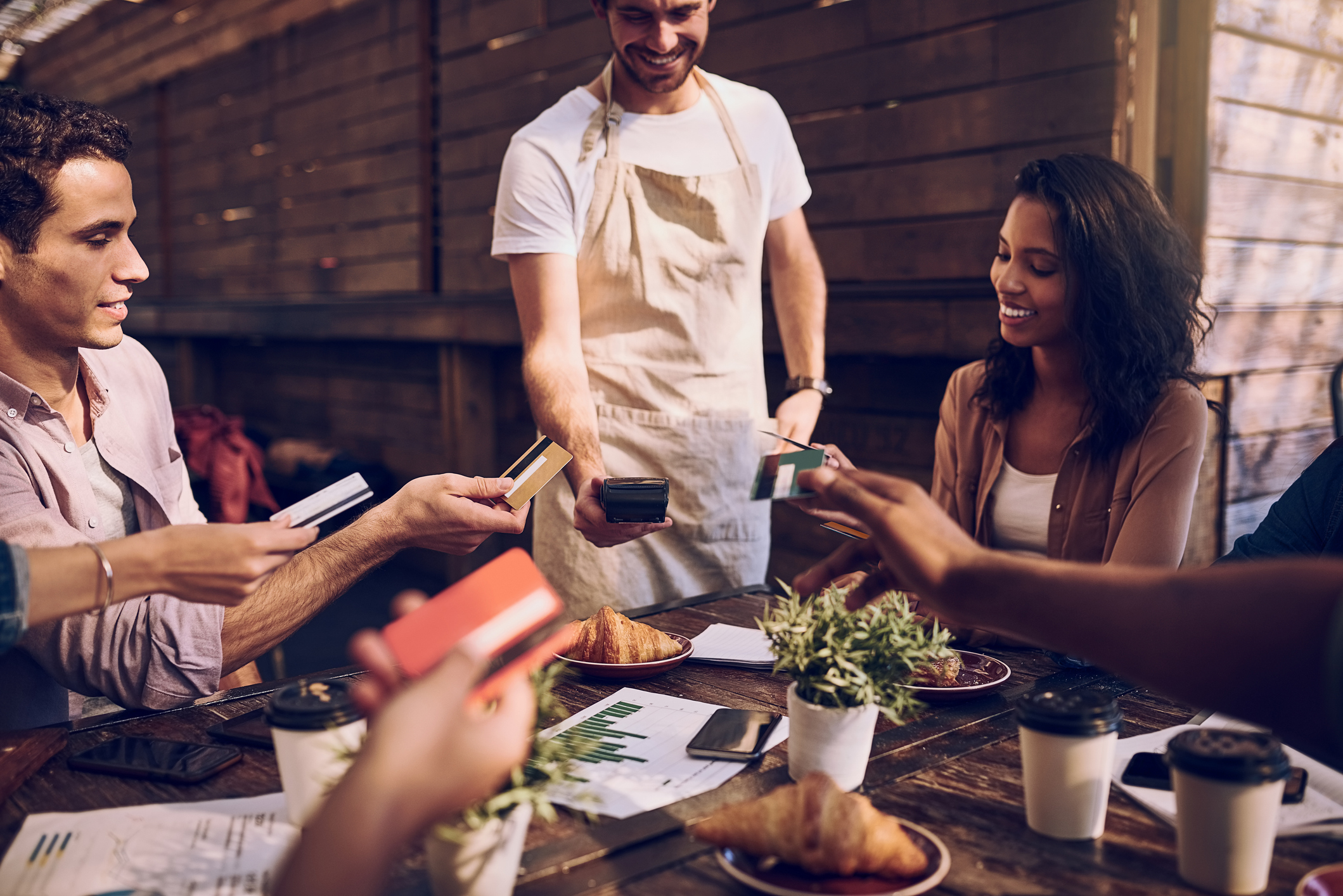 Recently, I was joking with a friend about various problems that can come up when groups of people eat together. She told me that she only likes eating with “certain select people,” and one of the key reasons was that she wanted to avoid “drama with the check” in restaurants. I was riveted, because this is something I’ve thought a lot about.

I love food, and one of the few things I relish almost as much as an amazing meal is a deep, open, relaxed conversation with fun, intriguing people. So you might think that a restaurant meal with a friendly and talkative group would mean uncomplicated, easy pleasure for me. Sadly, you’d often be wrong, and the typical reason is easily remedied.

The first time I went to a relatively nice restaurant without an older person who was paying, I was in college. I’d been chatting with a group of students who I’d just met, and one of them — a quirky guy wearing purple-tinted sunglasses and a sweatshirt emblazoned with a kangaroo — mentioned that he was hungry, and that he was sick of cafeteria food. A few of us agreed, and we wound up in a sleek little restaurant that served a wide range of fare, from grilled cheese and hamburgers to cheese plates, pâté, poached lobster, and duck breast.

A blackboard by the bar had specials, including venison with blueberry sauce with a side of vegetable risotto. An adventuresome eater who loves combining sweet and savory tastes, I felt drawn to that option immediately. When the waiter took our order, the others in our group got simple sandwiches and burgers, and I got the venison.

The second I ordered it, I noticed something. People were silent for a moment, and I sensed some tension… and possibly even hostility towards me. “Oh, I have kind of unusual taste in food sometimes,” I said to break though the stress. I heard a few fake-seeming chuckles, and people moved on to other things.

The discomfort didn’t last long, and I wound up loving my very first venison meal. When the bill came, a tall, curly-haired guy picked it up and quickly informed us that we each owed an amount that I knew was less than my venison. “Wait, I know mine was more than that: let me see the bill,” I said.

The woman next to me laughed in a way that struck me as not fully genuine, and she said: “Oh, that’s OK, we’re not gonna be that way.”

At that moment, it all came clear. I remembered my parents occasionally commenting that they didn’t love eating out with certain couples who tended to order a lot of alcohol, which made everything more expensive. Apparently, when you went out with a group, you split the bill evenly. Apparently, too, there was a kind of unwritten expectation that everyone would stay within a rough range, price wise.

Never one to enjoy conformity, my stomach dropped at the thought of future meals where I’d feel forced to get the turkey sandwich when I really wanted the grilled trout. After a few more outings with groups, I realized that many were not nearly as considerate as I was; they ordered several cocktails when I’d just gotten a snack, and expected me to split things evenly with them. My habit of spending a decent amount on food but virtually nothing on alcohol was out of step with most of my peers, and what I wanted rarely fit in with the socially expected code, spending wise.

Today, many of my friends like to get separate checks, which solves the problem beautifully… but many others split things equally. I don’t get it. When we shop with friends, we’re not expected to all go in together regardless of how much each person buys. My college dining companions in that sleek restaurant spent much of our meal discussing their upcoming spring break trip to Miami, while I was planning to take the train home to my family and stay in my free NJ bedroom. Thankfully, I wasn’t expected to help cover their plane fare and hotel costs even though I had participated in their conversation about their trip. But, when I ordered venison to be consumed by me alone, they assumed they had to chip in to help pay for it.

I didn’t mind being out of step, spending my money on food while most preferred party-filled trips. I just wished that I could pursue my own desires without creating ill will from others… and, for that matter, that I could hang out with big drinkers without being expected to help foot their bills. I wanted to pay for what I got, as if we were buying clothing or books instead of food and drinks. Why does eating a meal together shift the rules that generally apply when people spend time together but purchase different things?

The problem would be serious, but not earthshattering, if it mainly created annoyance and interpersonal stress among people who are already friends. But the effects go far beyond that. For many years now, I’ve shown my college students a documentary called Born Rich, which came out in 2003. Jamie Johnson, the director, hails from the Johnson and Johnson family, and his friends included a young Ivanka Trump. This intriguing profile of the lives of the extremely wealthy young adults in Johnson’s NYC social circle made one theme clear: the default for this crowd was to hang out with other very rich people. Some for sure branched out, but most seemed to stick to a core group with financial backgrounds very similar to their own.

There are many reasons for this, including comfort level and the simple fact that they lived in areas and attended schools where others like them tended to congregate. But those schools and areas were somewhat diverse. A likely additional reason: they tended to spend small fortunes when they went out with friends, splitting costs and accumulating per-person alcohol tabs that one of Johnson’s friends compared to plane fare to Europe. Acquaintances from different backgrounds might have enjoyed getting to know this crowd, and Johnson’s buddies surely would have expanded their social awareness by hanging out with a wider spectrum of people. But few nights out would be worth the cost of a journey abroad to a middle-class person, let alone someone who is financially struggling.

If it were normal to pay for exactly what you order, people from different social classes could hang out together with much more ease. Sure, it could be awkward to order your usual expensive champagne when your friend sticks to tap water, but, you know what: if I were that water-drinking friend, I would be delighted to learn about a new social world in an accessible way. I couldn’t expect people to change their consumption habits for me, but I could expect them to pay for their own pleasures, while I cover my own choices.

My ideal system would be for restaurant staff to ask groups at the very beginning whether they prefer separate or group checks… and then, if anyone in the group asks for a separate check, to honor that request even if most prefer the group approach. Of course, individuals can ask for separate checks now, but many would find that weird, presumptuous, or nitpicky. Few diners want to be that person. If separate checks were normal, that fear would be gone, and groups could hang out together with much more ease, avoiding a common source of tension. A small thing, and yet, potentially, cataclysmic, eliminating interpersonal problems and broadening social circles. I see no downside, and I always see a downside. Large-scale social change can feel nearly impossible, but this is an easy shift with potentially profound results.