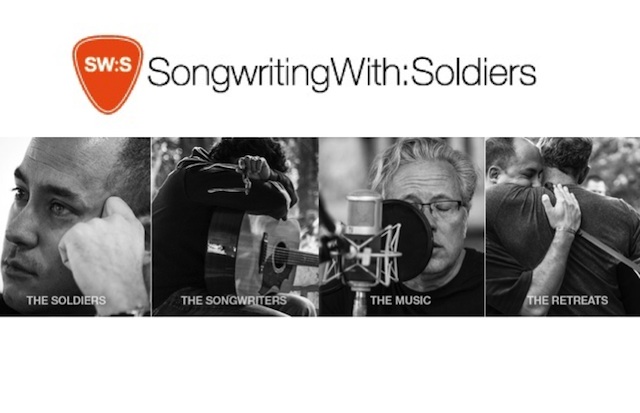 Darden Smith is an innovator of the human spirit. I met this charismatic, humble, talented, Texas musician / singer / songwriter a couple of months ago at the BIF10 innovation summit where with guitar in hand, he told his story of how the pursuit of the song has kept him on this planet.

Smith, known for his story telling lyrics, weaving folk and Americana influences with rock, pop, and the musical roots of Texas, founded a unique organization called SongwritingWith:Soldiers, which gives military men and women suffering from PTSD the opportunity to craft music from their pain.

A magician of collaboration, Smith brings veterans and songwriters together for weekend retreats where the process of songwriting, “gives the veterans an opportunity to put their experiences into words and melody so they don’t have to carry those bad things with them.”

Lyrics are the veteran’s own words, pulled out in interviews and conversations with musicians who set the lyrics to music. The songs, poignant tales of the difficulties, uncertainties, and victories of military life are recorded and shared through CD’s, concerts, and social media. Each soldier is given a copy and receives co-author credits.

The songwriting process is profoundly healing, enabling veterans to unburden themselves, release pain, rebuild trust, rediscover creativity, and reconnect with family and friends. And on the neurological level, music is more able to reroute neural pathways in damaged areas of the brain, than regular speech alone. Simply put: SongwritingWith:Soldiers saves lives.

Tomorrow is Veteran’s Day. While Americans are understandably tired of war and want to move on, for veterans the war is still with them. More than 2.5 million service members have been deployed to combat zones since 2001 and estimates are that 20% of soldiers suffer from PTSD with another 120,000 additional soldiers having suffered a traumatic brain injury causing serious physical, cognitive, social, and emotional problems.

There is a huge divide in our culture between the civilian and military: “an us and them in America,” says Smith, “when it should just be us. I want to use music to change that.” Whatever our politics, we all know we have not taken good enough care of our veterans.

Listen to some of these remarkable songs of people who have much to teach us about the horrors and beauty of life. As these soldiers find their voices, you can feel the catharsis, the restored hope, confidence, and faith in humanity. Song heals.

Darden Smith will be speaking about his transformative work tonight at 7:00 PM at the Apple Store at 1981 Broadway (67th St.) in New York City. Be ready to have your heart opened and spirit touched.

And here is Darden Smith’s own most recent single, Love Calling.