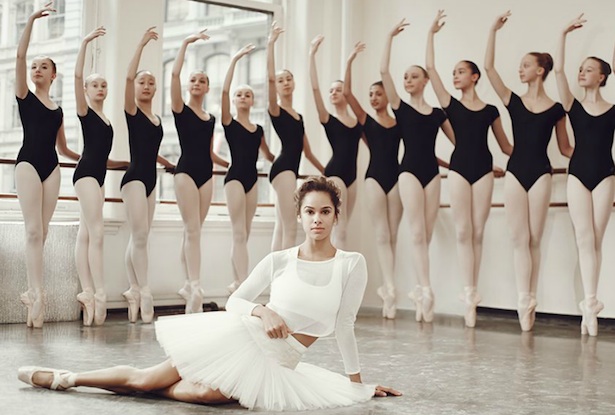 Do you know who Misty Copeland is? In case you don’t follow ballet: Copeland is the only African-American soloist with the legendary American Ballet Theatre (ABT). She currently has the lead in ABT’s The Nutcracker at the Brooklyn Academy of Music. Let me put in perspective how rare an accomplishment this is.

When Copeland joined the ABT 14 years ago, at age 18, she was the only African-American female in a company of 80 dancers. It remained this way for eleven years.

In 2007, she became the first Black female soloist in two decades – and only the second in the company’s 76-year history. Raven Wilkinson, the first Black woman to receive a full-time contract with any major ballet company, was forced to leave the U.S. in the 1950s (in order to continue her career overseas) because of death threats from the Ku Klux Klan when she toured with her company.

Copeland’s journey to stardom in one of the most exclusive, expensive and elite professions exemplifies the American Dream both realized and deferred. Daily struggles in a financially-strapped, broken family (her mother remarried four times), a God-given talent, mental and physical toughness, perseverance, discipline, passion for her art – all are present in her personal history. Not to mention luck: She was discovered while taking free ballet classes on a basketball court at her local Boys and Girls Club. And in her teens, two ballet teachers believed in Copeland and took her into their homes to escape the debilitating conditions of her family’s household.

No matter your dream, you have the power to make it come true with hard work and dedication, despite what you look like or struggle with.

And this year, Copeland has become an author. In the introduction to her first children’s book, Firebird,? she writes: “My hopes are that people will feel empowered to be whatever they want to be. To feel that they have no limits, just endless dreams that are reachable. No matter what that dream is, you have the power to make it come true with hard work and dedication, despite what you look like or struggle with.”

Addressing the racism of ballet culture (historically, the argument has been that Black women lack the “right body type” for ballet), she writes: “I’m determined to ignite change, or at least provoke a conversation. My hopes are to start with American ballet in the U.S., to have it represent what the American dream and equal opportunity truly are, what it was meant to be.”

With renewed civil unrest against systemic racism in America, and the repeated, polarizing tropes of both conservatives (calling for individual responsibility) and liberals (calling for political and economic reforms), Copeland reminds us the truth in each.

It’s true that unjust economic and cultural barriers can’t be overcome by hard work alone – and it’s also true that whatever the environment, people always have more inner power than they realize to improve their lives. Rather than just read/share opinions with which we agree, or dismiss/flame opinions with which we disagree, it would be far more productive to integrate the partial truths of both views.

Despite Copeland’s prestige as a soloist, it’s worth noting that neither she, nor any other Black female dancer to date, has ever been promoted to principal ballerina in the major American companies – the ABT and the New York City Ballet. If Copeland never reaches that pinnacle, she may always wonder (a question no White dancer of Copeland’s talent will ever need to ask): Was talent the only factor, or does the ballet’s tradition of exclusion mean there’s still no room for a Black star to pirouette alongside White swans? It’s clear there are too many firsts yet to be achieved, as we end the year 2014.