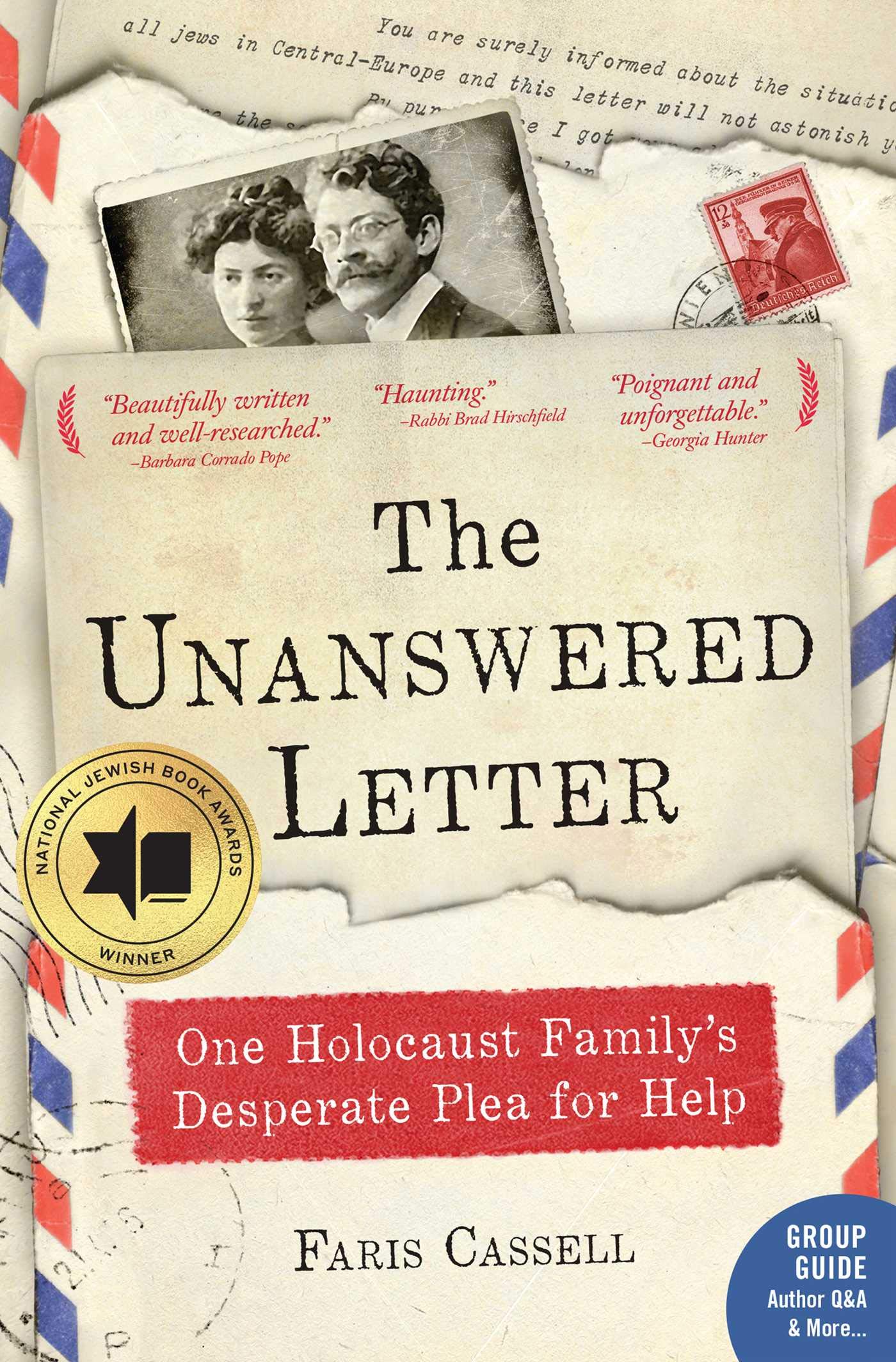 “If there is only one book you are going to read….” is not something I say often, and something I don’t think should ever be said about a topic as important and as complicated as the Holocaust. I will say though, that anyone who cares about the topic, or any questions of evil and how we respond to it, really must read Faris Cassell’s new, and already award-winning book, The Unanswered Letter.

I recently had the opportunity to talk with Faris about her work, which had already been awarded first place in the Jewish Book Council’s 2020 category for Holocaust writing, when we sat down, and since that time, has also won first place in the American Society of Journalists and Authors 2020 biography category. In other words, many people are noticing this powerful, compelling, and perhaps even game-changing approach to the topic.

You will begin to get a sense of what I mean, as you read the record of our brief exchange, and I hope it leads you to read this book about one unanswered letter, but also about the “unanswered letters” in all of our lives, and even how we might begin to answer them.

Faris, you state at the very beginning of the foreword, that The Unanswered Letter is “the story of a journey, (yours) and others, into the world of a letter dated August 5, 1939.” What have you discovered in your own journey — what wisdom or insight feels especially applicable to the moment in which we find ourselves in May 2021?

This may sound harsh, but it reflects accumulated insights of my decade-long journey researching, writing, and pondering this story: We all need to look evil in the face. I’d lived a life of privilege at the time I encountered Alfred Berger’s desperate letter. I believed in human goodness. I’d never experienced human cruelty.

Immersing myself in the Bergers’ Holocaust story, vicariously, I came face to face with humanity’s seemingly limitless capacity for evil. I learned that evil can look like goose-stepping Nazis, or passive neighbors watching cruelty unfold next door. I’ve come to believe that it’s crucial to look at both evil and goodness without averting your eyes, calling out both, affirming the one, unequivocally fighting the other.

You are an accomplished journalist, and yet at many points in the book, you describe yourself as being unprepared for what you experienced and learned in your journey. What do you mean about that? Is that personal, is it the nature of all writing about the Holocaust, a combination of the two?

For a writer, there is nothing more intimidating and also seductive than a blank page. From the moment I held Alfred Berger’s desperate letter, it haunted me and touched my heart. I knew I needed to learn this story and write about it. I also knew that I was ignorant about the Holocaust, and had no experience with long-form writing. I was accustomed to short pieces with tight deadlines.

Many, many people helped me to find the information I sought or didn’t know I needed to seek. Also, many people helped me to understand what I was learning and cope with it. The emotional shocks I experienced unearthing the Bergers’ story were nothing compared to what the Berger descendants felt as we put together their family story, but even so, they were significant.

The first books written about the Holocaust were raw. Many were written by survivors and were deeply personal. Information about the massive scale of the Holocaust was only beginning to leak out. A few magazines ran photos of the unbelievable slaughter of Jews. People were shocked. Some were unbelieving or found difficulty processing such unheard-of bestiality. Those first stories helped to open immigration up to the survivors trying to join family in America. Over time, more stories and more facts emerged.

Now, as survivors are aging and dying, there are fewer first-person tales, but a new wave of writing is based on family stories, letters, photos, and documents unearthed and read, many for the first time. Documents previously difficult to find are now available, as from archives like the massive Bad Arolsen. Counties including Germany and Austria are taking responsibility. New information and a broader perspective mark the most recent writing. The deep emotional impact of Holocaust writing has not changed at all.

Tell us about your relationship to antisemitism, to why you spell it without either a hyphen or an uppercase “s,” as it so often is, and how that decision informs how you tell the story you tell.’

As a white, Protestant, American I’d never experienced antisemitism, and in fact, never thought about it. In my suburban Seattle high school of 1600 students, there might have been three Jewish kids. I’d never heard the words Passover or Holocaust. When Sidney and I were married, I encountered antisemitism in my own family and began to learn how it was all around me. I’d just never noticed.

I first encountered this spelling format from James Carroll’s award-winning book Constantine’s Sword. From him, I learned that the racist terms, Aryan and Semitic, were ignorant, inaccurate descriptions of any race. Why should anyone capitalize and promote that ignorance and hatred?

You weave the story in a way that is both “very Jewish,” while also appreciating the overlapping stories of all mass hatred and genocide. What would you say to those who insist on treating the Holocaust as unique in human experience? What do you think drives them in that belief, and how would you address those concerns?

Jews’ grief and suffering during the Holocaust reverberates in powerful, personal, intimate ways now through several generations. That horror cannot and should not be defined, contained, explained, or exploited. Holocaust stories can only begin to remind the world that in an educated, modern culture, one nation undertook the unthinkable: to exterminate an entire people. Yet, there is no gain for anyone to exalt or minimize anyone’s grief and misfortune. No one wins when experiences of grief and injustice are compared. It’s far more important for all people to open their arms and mourn, comfort, and work to heal those who suffer.

Part of my answer is contained in your first question. I now believe that no one, myself included, should ever look away from evil. Near the end of my book, I bring up the topic of blindness, a thread that weaves through the Bergers’ story. It was physical, Alfred Berger became legally blind. It was also psychological. “Good people” throughout Europe blinded themselves to the cruelty all around them and to their own potential for fighting it. I’ve only begun to recognize how blind I have been to the cruelty in many forms near me.

What’s next for you? What big project is taking up the time and energy that went in to the making of this book?

About what have I not asked you, but you wish I had

What role did luck, or chance, play in your writing this book?

Alfred Berger’s desperate came into my life by the slimmest of chances. My husband’s elderly patient had saved the letter for decades, but she decided one day to bring it to him. Why? She could have thrown it away or left it to her daughter to save for another half-century. The timing of his receiving the letter was serendipitous. I was a journalist and was restless in my work, looking for a meaningful, compelling story to write.

Another piece of luck, the Bergers’ granddaughter in America has an unusual name, which made it relatively easy to find her…the coincidences, or luck, go on and on. It’s as if the letter came to me for a reason, and I was meant to write this book.