King Of The Mountain: A Visitor’s Journal Entry 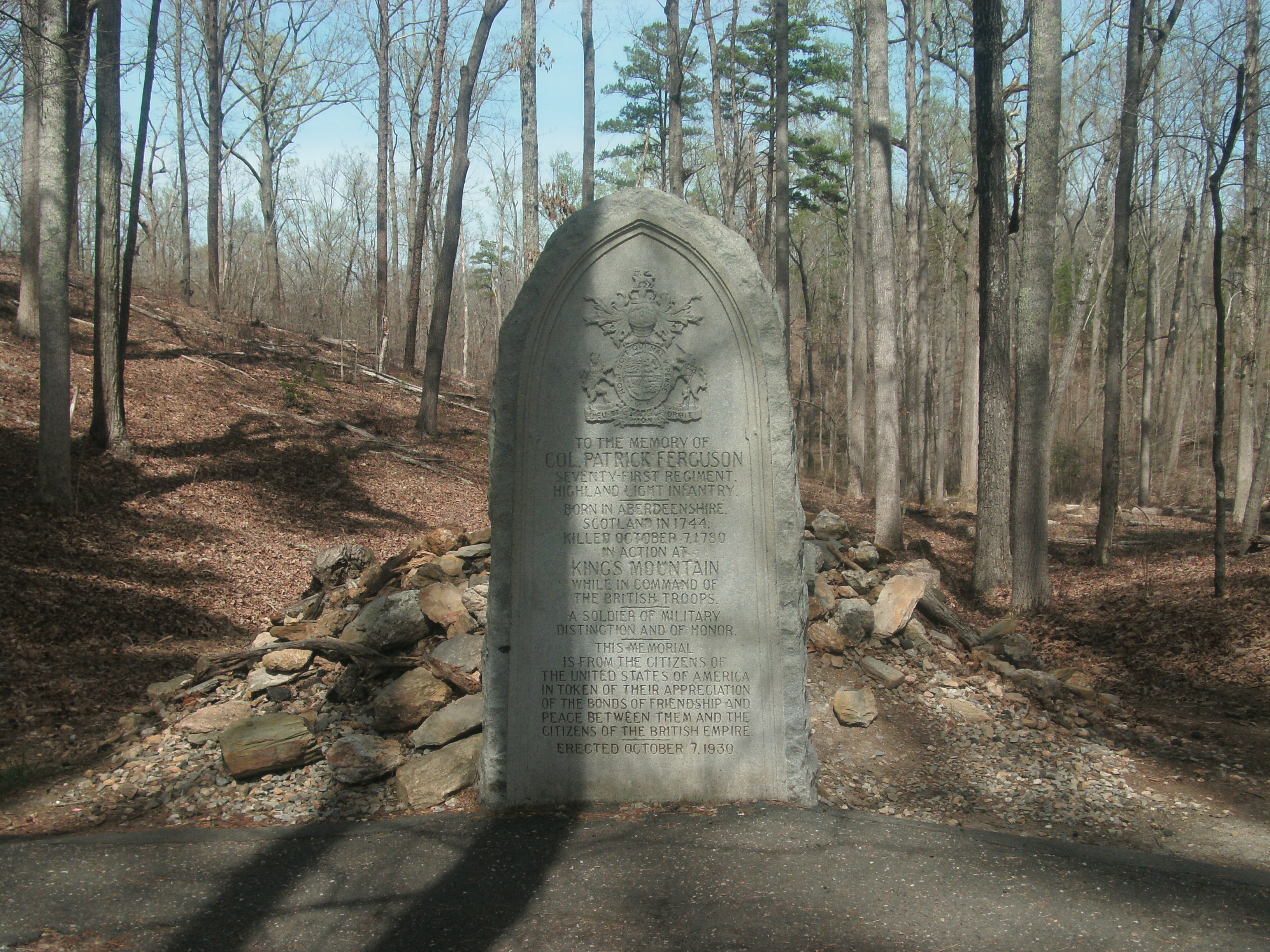 I see where you fell, Ferguson. They tell me you were struck by a dozen bullets and dragged down this hill with your leg caught in the stirrup. Easily said. Did you know what was happening then, or was it all a blur? Did you see your life flash before you, as the trees looming heavily faded away? You are lying beneath cold stones, gray with lichen clinging. Can you hear the ocean’s cry that sent you here, to a stranger’s land, to molder in our earth?

Ferguson, did you ever resign to your defeat and death? Did you ever know what hit you, in the cloud of searing smoke that blinded your eyes like your pride? What do you think of it all now? Are you sorry for those who fought under you, your young Tory Troopers? Do you pity Virginia Sal, who shared your bed and your flaming hair? Did you ever really love her, or was she just for pleasure to pass the time? Did you know she would share your fate when the dawn blazed and they took her colored locks for your crumbled uniform? Now you lie together, wrapped in old raw-hide, shattered sinews binding, broken bones mingling. Is this bed of your own making?

Do the scenes of your final hours play over and over again for you? Are you swinging your sword again, blowing your silver whistle, riding high, defying the red sun? Oh where is the horse, and where is the rider now? Would you give up your kingdom, O King of the Mountain, but for a horse? Do you watch the world drain red as the coat you’re wearing? Do you know how it all ends? Does it tear your heart like the bullets, wrenched deep with wounds and scars? Or is it hate that keeps you from sadness? Have you forgiven those whom you fought, and those who killed and mutilated you? Are you lying in heaven or hell tonight, or are you some ghost betwixt or between? Did you ever make your peace with God, who you bragged would be unable to take you from this mountain?

What if we had met during the war? What if my family had been rebels? Would you have burned us out, razing the house and barns, and turned my green valley to brown? Would my father have been killed in your Egg Harbor attack, when your troops bayoneted sleeping men? Would my glistening tears have fallen on the scorched ground like sparks, blazing with hatred for you? Would I have rejoiced on the day of your death, would my people have been the ones to take you down? Or would I have found it in my heart to forgive you?

What if I had been a Tory, who saw you as the savior of a harried people? Would I have followed your band, your King and Country? Would I have been on the mountainside on the last long night? Would I have sung you that final song, or plaited your long red hair? Would I have unbound your tattered plaid, and wrapped you in rawhide? Would I have been among the women who buried their men in shallow graves, and wailed as the crows cawed, in the aftermath of the slaughter? Would the carnage have rendered me mute as a whole world was carried away by the wind, and a new one born?

Can you feel the rocks being thrown on your grave for shaking a fist at the King of Heaven and losing your bet to the Rebels of Hell? Do you laugh as the stones pile up, or do they fuel your anger…or cause fresh pain? Do you regret your burning pride? Did it prove too blinding?

Do you miss the misty moors where you hunted in “The Land of Cakes”? Do you yearn for the voice of the fiddle? Do you long for the feel of the sword and the rifle in your hand? Do you miss the grand parties where you were the toast of the table, and the beautiful ladies you wooed? Can you feel the rain seeping through ground, like the tears your mother shed for her “Gentle Pattie”? Do you miss her, and the family you loved so well? Do the bones of Sal, overlaid with your own, keep you company? Or are you lonely now with nothing but your fame and infamy to comfort you in a strange land?

And what say you of your monument, with the lion and the unicorn carved deep in the stone? Surely that must please you, some mark of your allegiance, some mark of home, so very far away. Take it, Ferguson, as a sign we wish you well. Your old enemies still dread your fierceness, the tip of your bayonet, the flame of your torch. But you spared Washington on a point of a huntsman’s honor. And you said you didn’t regret it. The shot you would not fire was made of gold. Perhaps it weighs out the better, for how truly stands the boast of earthly things?

I’ll toss a stone on your grave, Ferguson, like all the others do. Then I’ll mutter a prayer under my breath and sing you a song from your home. Did you ever learn Gaelic on your Highland estate? Whether you did or not, it is the language of the lament, and you loved fine music. Mostly Scots fought up here, fought against each other for differing ideals, drawn together by a single destiny. Surely it would be fitting to sing in the old tongue, would it not?

I will sing that I am sorrowing, early in the morning rising. Yes, here, with the rain starting to fall gently, darkening the dirt, and the mist building up, am sorrowing for all that this place has seen. And I hope that you may hear me. I hope you’ll take it as a sign of friendship from me. In some ways, we were not so very different, you and I. The artist in us is the same, and the necessity of drawing courage from defeat. Perhaps we might see each other someday? Oh, can you hear me singing?

Friend and foe lie here, stripped to bone, skin from soul rent asunder. You are now beyond your monarch’s fury, a silent song dragged along to its end. You lie on the Mount of Kings until heaven and earth shall pass away, as was your wish in all its twisted irony, your heart grown cold, to dust returning. Tell me, where does your spirit wing? Oh, tell me, Ferguson. Answer me now: Does it matter from where you stand if I’m Whig or Tory? Did it ever matter at all?

I wonder, has anyone thought to say a prayer or sing a song here, or have they just gawked at the rock-pile and told the old story, that you were struck by a dozen bullets and dragged down this hill with your leg caught in the stirrup…?