Just As Queen Esther, McDormand Wielded Power By Realizing She Has It 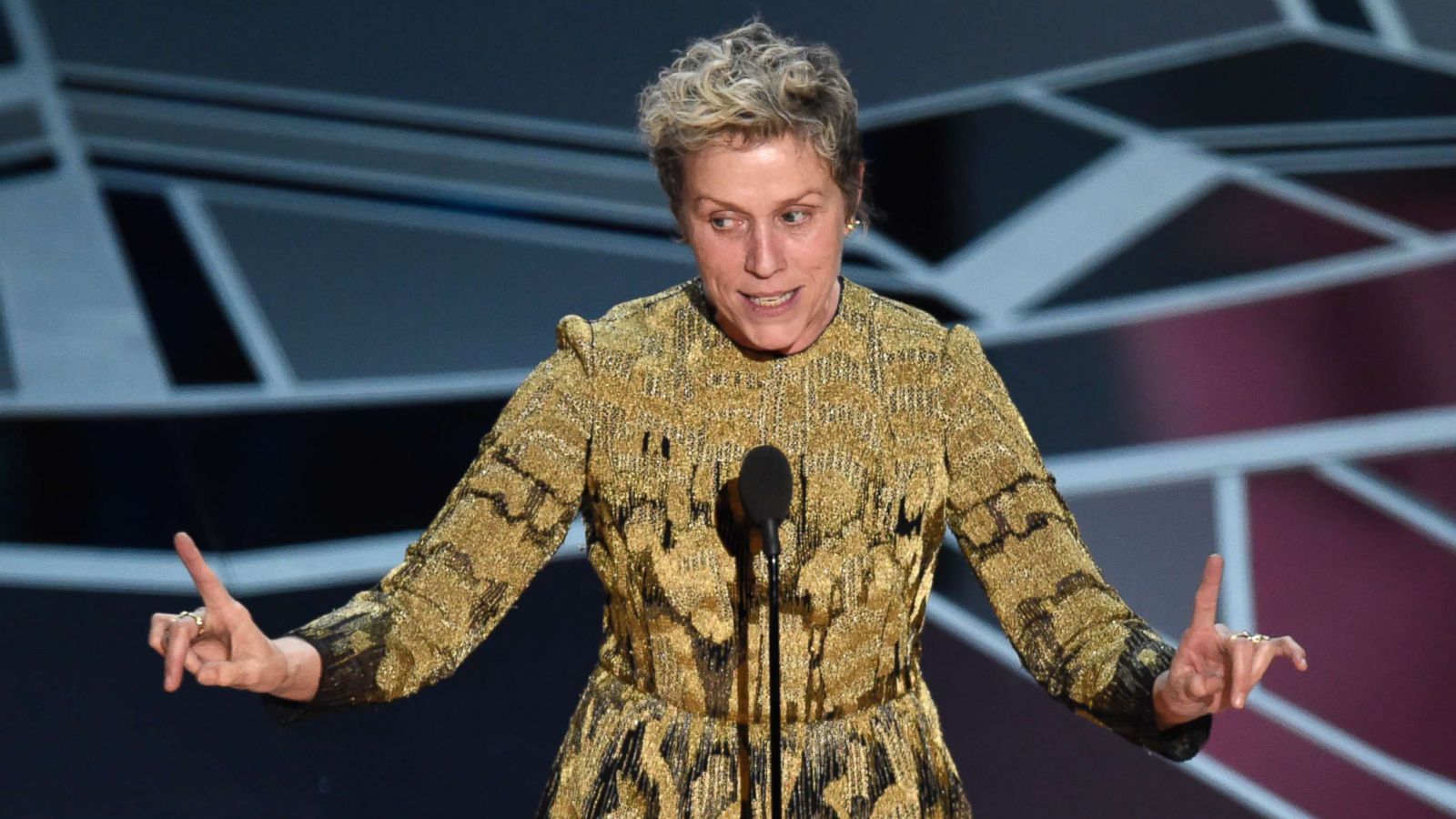 Sometimes, all a person has to do to wield power is to recognize that she possesses it.

For instance, last night at the 90th annual Academy Awards (themselves started according to Louis B Mayer biographer Scott Eyman as an “act of appeasement” to prevent labor unions from having more power), best actress winner Frances McDormand mentioned two words that could potentially have an outsized impact on the ability of women and minorities to get jobs in the film industry and be paid a fair wage for them.

McDormand was one of the few honorees last night who had some kind of explicit message for the assembled crowd.  In the next-to-last award, the actress asked all women who had been nominees to stand and told Meryl Streep, perennial front row attendee and frontrunner for overall nominations with this year’s for The Post as her 21st in 39 years( she has won three times), that if she stood up the others would follow.  Streep stood up.

The proportion of those seated to those standing was not as high as one might hope or expect… McDormand’s point precisely.  But, she then concluded her speech by saying that she had two words for the assembled crowd, “inclusion rider.”

As a result of the winning actress’ speech, this term spiked in Google searches, and articles were written to explain the actress’ words by the New York Times, the Washington Post and National Public Radio.  According to the Washington Post, “An inclusion rider is a stipulation that the cast and/or the crew in a film reflect real demographics, including a proportionate number of women, minorities, LGBTQ individuals and people with disabilities. Big-name actors who have leverage in negotiations could put this stipulation into their contracts and drastically change representation in film.”

The notion of an inclusion rider was first suggested by Professor Stacy L Smith in a TED talk on the subject in  October, 2016.  Smith came up with the idea alongside a clause in a contract.

“If top actors insisted on the rider, diverse casting could become commonplace, Dr. Smith said. “We could see the numbers onscreen and behind the camera jump if it was adopted by some of the most powerful people in Hollywood,” she added.

Basically, this shows that stars have power – but they have to wield it.

When we look carefully at the text, we see that Esther undergoes the drastic transformation from being taken to the palace(2:8) and to the king himself by force(2:16;  the verb in both these instances “she was taken” is in passive tense, implying her lack of volition) to being a queen exerting power and making decrees.  Yet, from the time she has been chosen by Ahasuerus, she has been a queen.  In other words, Esther is in possession of power the entire time she was with the king and in his palace.  She had to both decide to use it and to figure out how best to do so.  The key is that the only thing that changes from the time the royal crown is placed on her head(Esther 2:17) to the time she begins to wield power is her willingness to use it.

Even as the crown is placed on her head, Esther does not yet see herself as free to act.  She is not called “Esther HaMalkah” Queen Esther, until she tells the king of the plot against him by eunuchs Bigtan and Teresh and she reports the threat to the king in the name of Mordechai(Esther 2:22).  However, she is not called a queen again until chapter 4 when Mordechai tells her of the plot against the Jews and we are told “the queen was exceedingly distressed”(4:4) which seems like an oxymoron.  If a queen holds power, why should she be distressed?

This distress seems to be the turning point of the book since the entire plot of  Megilat Esther revolves around whether and how Esther will act to save her people.

Once she makes the decision to act, everything is changed.  It is only up to the point where she is deciding whether to take a stand for her people that there is suspense in this tale of palace intrigue.

Though she is queen, Esther is  reluctant to act in accordance with the crown on her head.  Mordechai tells a messenger of Haman’s plot against the Jews and even includes a written copy of the decree (Esther 4:8) so that she can see precisely how urgent the matter is and go to the king to plead on behalf of her people.  Even so, she tells Mordechai of the impossibility of his request, that anyone who approaches the king without being summoned will die unless the golden scepter is held out and she herself has not been called to the king in over 30 days. (4:11)

Mordechai replies that she will not be saved even if she remains silent now. Finally he drops his zinger: “Who knows if it is for this very moment that you have arrived at royal power?”(4:14).  Basically, he is reminding her that silent, she has no power and will most probably die, but if she takes a risk and speaks up, she is using the power she already has.

This verse also contains the one veiled reference to God in the entire book, the only book in the canonized Hebrew Bible which does not contain explicit reference to the divine. In this verse, the words Mordechai says to her, “relief and deliverance will arise from elsewhere” are seen as referring to God.  Perhaps though, he is saying if you don’t use the power you have, then you haven’t really arrived at royalty, that you are not really a queen unless you behave with that power.  He is telling her what she already knows:  she is part of the “malchut,” the realm of kingly power.  She just needs to decide to use it.

Once the queen acts, the rest of the story unfolds, because all it takes for the king to condemn Haman’s plot against the Jews is an exposure of it.  When finally, at the second banquet, Esther points a finger at Haman(7:6)  and allows the king to learn who is behind the plot to annihilate her people, the king orders Haman hanged immediately.

Not all responses to evil – or to mere wrongdoing – are so swift and decisive as this one.  Nor should they be – measured responses and trials in the court of law are important.

However, the significant factor in the positive outcome of the Esther story is that Esther both acknowledges her power and makes use of it.  Esther is given a royal mandate not to revoke what the king has done already, for that is impossible, but instead to write new letters and edicts about the Jews.  Under Esther’s guidance, the people are now able to “gather and to arise for their souls (Esther 8:11).” And again, Esther writes a letter(9:29) which guides the people in their Purim celebration. In fact, based on this verse, Maimonides in Hilkhot Megillah 2:18, states that Purim is a holiday that will endure beyond historical time into the days of the Messiah.  The lesson is that the holiday where humans use and wield power appropriately is the only one which is eternal.

One of the strong messages in the book of Esther is that Esther has the royal power all along–she must just take the time to figure out how to use it.

Frances McDormand, similarly, is suggesting that many in Hollywood do wield power and, if there are things they find concerning, or want changed, they must address them and use the legal means available to them, such as inclusion riders.

And that message, too, needs to be a crucial component of the Time’s Up and Me Too movements. Although women have been victimized and still have unequal access to power, both financial and influential, there are many ways in which women can act with the power they do actually have to help change things for the better for other women and other groups who are not having all the opportunities that they might in America.

Both McDormand as an A list star already possessed of an Academy Award and Esther had power all along, yet did not know how to use it.  Their examples in choosing to publicize their causes and act for the betterment of a group can teach us all that, although most of us are not queens or stars, we are still invested with power of all kinds.