The Joy And Heartbreak Of Being A Sports Fan 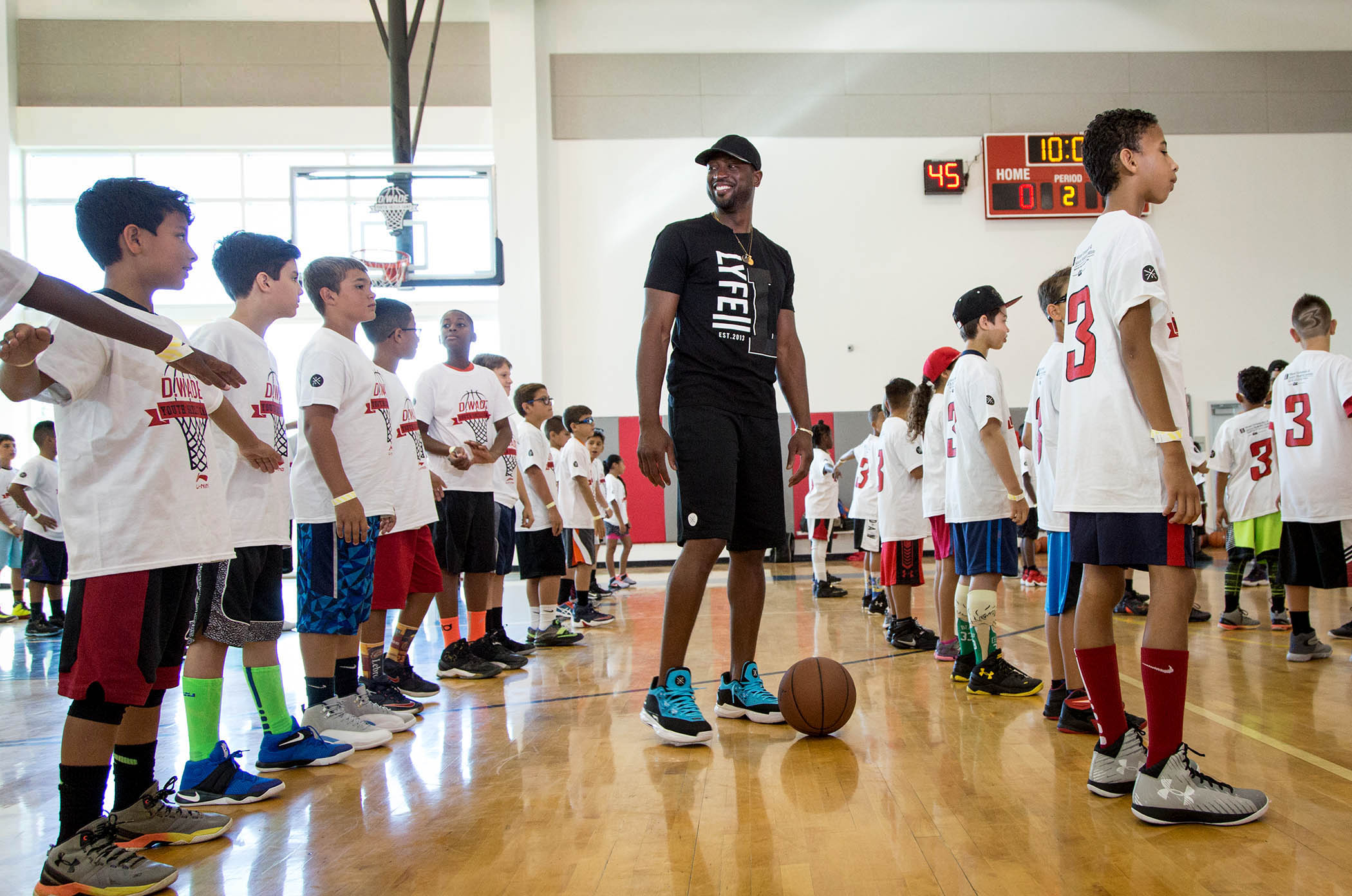 Categories: there’s more to you than you realize; the why (why be a sports fan)

My son, Jonah, is an avid fan of the Miami Heat. His room is filled with Heat paraphernalia. He has quite a collection of Heat shirts, sweatshirts, hats, signed basketballs and even pair of sneakers that carry the name of former Heat favorite, LeBron James. His knowledge of the team, players and coaches is impressive as are his skills on the court. Let me be clear: he didn’t inherit any of this from me. I’ve never been a fan of a sports team. I didn’t grow up watching or playing basketball.

Everything I know about the game, specifically the Heat, has come from Jonah. We watch the Heat games on TV and, on occasion, we go to home games. Either in our family room or in Miami’s American Airlines Arena, which is a 40-minute drive from our home, Jonah sits by my side, serving as my own personal sports broadcaster, detailing every play, foul and stat he feels that I must know. While I’m by no means as passionate a fan of the Heat as my son is, I have to say that experiencing his love for his team is pretty remarkable and it has rubbed off on me.

Given all of this, I had a really hard time last Wednesday evening watching Jonah come to terms with Dwyane Wade’s decision to sign with the Chicago Bulls. Once again, a Heat player that my son has looked up to and supported for many years has disappointed him. Just two years ago, he was stunned by LeBron James’ departure from the team and now, Dwyane is leaving. Granted, this is a minor issue given many of the challenges kids face in the world today. This being said, it broke my heart to watch my kid’s overwhelming enthusiasm for his team appear to dwindle on Wednesday. He still claimed to be loyal to his Heat, but his confusion about supporting a team that has lost the personalities that have made it so special to him was clear.

Processing the bad news, Jonah went to his room, returning with a few framed posters of Dwayne. “Well, I guess I don’t need these anymore,” he said. “I’m going to put them in the garage with the LeBron stuff.”  Adding insult to injury, a few weeks ago, my wife signed Jonah up to attend DWade Youth Skills Camp, a two-day basketball clinic run by Dwyane himself – not by the Heat.

Jonah had been looking forward to attending largely because it was promised that Dwyane would be there serving as a coach. The camp was held this past weekend, just days after we learned Dwyane would be leaving town.  As Jonah turned to put the posters in the garage, he paused and turned back to me. “What should I do about this weekend’s basketball camp? I’m really disappointed in Dwyane and don’t know if I should go. What do you think Dad?” Having never been a sports fan, I really wasn’t certain how to answer this question. I suggested that we sleep on it and talk about it in the morning. Fortunately for me, Jonah agreed that this was the best plan of action.

Later that evening, as I took some time to figure out how to guide my son, I found myself thinking about my late grandfather. He loved baseball, especially his Brooklyn Dodgers. While there were certain players that he admired, his passion was for the game itself and his loyalty was to his local team. Were my grandfather with us when the news broke about Dwyane, I’m certain he would have told Jonah to remain loyal to the Heat. However, I don’t think he would have encouraged my kid to go to Dwayne’s camp.

My grandfather was a baseball fan long before the concept of free agency existed. Sure, players could be traded by a team as the legendary Babe Ruth was back in 1919. The idea, however, that a player could negotiate a better deal with another team was unheard of to my grandfather and his contemporaries. Today, however, this is the norm. Free agency has helped to give rise to the incredible careers of athletes like LeBron and Dwyane, both of whom are much more than basketball players.

They and many of their colleagues are their own corporations that earn millions from clothing and shoe lines, product endorsements, television appearances and movie roles. The salaries that they demand are outlandish, but the attention that they bring to their team, their sport and their city justifies the costs associated with their contracts. In many respects, athletes like LeBron and Dwyane are bigger than their team. Their talent and success make it so that they don’t really need their team. And this would have made my grandfather very unhappy.

What did make my grandfather happy was watching the Dodgers. Watching the Heat with Jonah has taught me why. Cheering on your team as they compete is a powerful communal experience, something that connects you to everyone who is watching the game with you. You all feel the same emotions – good and bad. You celebrate wins and mourn losses. Together, you complain about a bad call and, sometimes, you even get angry at a player or two. But you never go it alone. When you’re a fan, you’re part of a community of folks who share your passion, wear the same jerseys and loudly shout the same cheers. Most importantly, as my grandfather used to tell me, the day after a game, you and your fellow fans have a lot to discuss.

My grandfather said that one of the worst thing about the Dodgers moving to Los Angeles (something he never really got over!) was that he no longer had anything to talk about with strangers he ran into on the way to work. In his book, The Last Good Season: Brooklyn, the Dodgers, and Their Final Pennant Race Together, author Michael Shapiro explains that what “the Dodgers were about was a topic of conversation” and this, he says, is what makes sports teams so important. It’s, “what really makes cities work and what holds cities together.”

There are too many issues out there that drive us apart these days and not enough opportunities for us to rally together around a common cause. Because of this, we lack a sense of community – of being truly invested in something with those around us. As Jonah grows up in South Florida, one of the few things that really connects him to his larger community, whether it be kids he just meets, the guy who cuts his hair every month or the waitress who served us dinner the other night, is the Heat. Because of this, I realized late Wednesday how much I want to encourage my son to remain a Heat fan.

I also realized that part of being a fan means going through the challenging moments like the one Heat fans are going through right now. Some fans want to blame Dwayne’s decision to leave the Heat on team management, some want to label Dwayne a traitor and others, like Jonah, are just confused.

Whomever they want blame, whatever they’re feeling or thinking, the fact is, the frustration, the disappointment, the confusion are all part of the fan experience. As painful as it is to lose an iconic figure like Dwyane, it’s a topic of conversation that draws people together. And as fans come together to vent over the next several weeks, it’s important to remember that the power of the Miami Heat and every other team out there doesn’t lie in the hands of one or two players, but in the ability of a team to pull people together and create community. Dwyane might not need the Heat any longer, but South Florida sure does and so does Jonah.

No, my grandfather wouldn’t have wanted Jonah to go Dwayne’s basketball camp this past weekend. But, with all due respect to him, the rules allowed Dwyane to do what he did. He gave 13 years of his career to the Heat and Jonah enjoyed many of these. Plus, while he is not thrilled with Dwayne’s decision, Jonah still does look up to him. What a better way to sort out his feelings than to spend some time at the camp with Dwyane and other kids who are wrestling with the same emotions! And, by the way, I can’t help but hear my grandfather saying: “Wait, you paid how much for him to go to this camp?! To heck with what I feel! Don’t waste the money, Jonah, go to that camp!”

So, yes, Thursday morning Jonah and I decided that he would attend the camp and it was by far the right decision. “I got to say thank you to Dwayne for all he did for the Heat,” Jonah told me when he got home. “And Dwyane said to me, ‘No! Thank you for being a fan!'” My kid got some sort of closure and validation from Dwyane. But, what’s even better is the one complaint Jonah had about the camp: “Dad, one kid had the nerve to wear a Chicago Bull’s hat!” Without a doubt, my son remains a Miami Heat fan and this is a great thing.