In Memory of Leibel 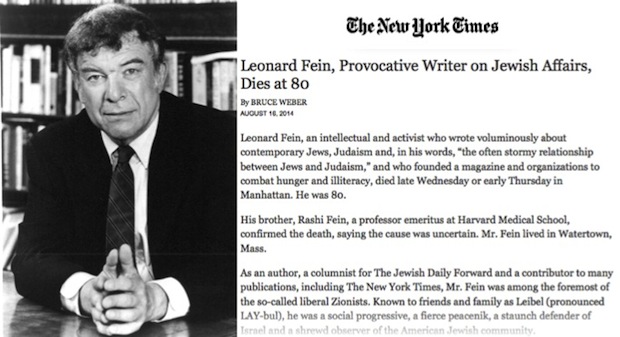 My teacher, colleague, and friend – Leonard “Leibel” Fein – died this past Thursday at the age of 80. Leibel reflected on every central theme, new idea, debate, fault line, and cultural and political innovation that Jews and Americans have argued about in the past half-century. You can read the New York Times obituary and the many tributes that have appeared in the last few days to learn about the myriad accomplishments of this brilliant, passionate, eloquent, poetic, mischievous, funny, idealistic, realistic, prophetic, relentless, energetic, builder, writer, speaker, lover, and truth-teller. He was literally and literarily the most important liberal ideologue in American Jewish life for the past fifty years.

But I want to offer something different.

I have had the unique opportunity of working with Leibel on a book of letters he and I exchanged over the past six years. We wrote about God, social justice, identity, prayer, politics, the Holocaust, and the State of Israel – to name just a few. We spent hours together talking and story telling – in NYC and Boston – sharing our wisdom (well, Leibel shared his wisdom and I shared my opinions). Leibel finished editing his letters a couple of months ago, and I was supposed to have my edits done a couple of weeks ago. In fact, just a few days before he died he emailed me and asked, “What do you think will come first, your edits or the Messiah?”

No one critiqued the existing reality with more insight and love than Leibel. Our plans were to publish our book (the contract is already signed) and to go on a book tour together in early spring. Two generations in honest conversation about the future, hoping to stimulate and inspire the reimagining of who we are as Jews, Americans, and human beings – an increasingly divided set of identities.

Jewish wisdom teaches that the deepest way to remember people is to offer their wisdom in hopes that the wisdom roots and transforms. So here are a few gems from our soon to be published book – they are drops in an ocean of insights and illuminations:

Leibel didn’t buy into the conventional definitions of religious and secular. No secular person I ever met understood the task of religion better than Leibel.

“An ethical secular person is someone who knows exactly what the God he doesn’t believe in demands of him.”

Leibel challenged the many ways we divide the world, especially the divide between our particular and universal commitments.

“Among the most familiar lines in our tradition are two I am convinced are meant to be heard simultaneously rather than sequentially.? ‘If I am not for myself,’ asked (the sage) Hillel, ‘who will be for me?’? And, at the very same time, ‘If I am only for myself, what am I?'”?

“The particular and the universal, pulling us in different directions, sometimes in fact disabling us, but more often offering us a tumultuous balance, and followed, inevitably, by the question that is not a question at all but a demand: ‘If not now, when?’ We learn to live with this tension…the tension is a source of wisdom and perhaps even of decency.”

Leibel saw Judaism not simply as some narrow tribal allegiance or creedal identity – a challenge for all religions these days.

“My Jewish is a system of vocational education – that is, of educating people for life as a calling (the word “vocation” comes to us from the Latin “vocare,” “to call,”). The Jewish that delights and compels me is exactly that – a calling. It is a calling to help repair this oh so badly fractured world. The key word of the key prayer of the Jewish tradition is shma: Listen Up. And if you listen, you will hear the call. It is not all that easy to hear it. The noise of the cash registers, of the missiles, of the football games, and of the hurricanes, and the deafening silence of the starving and the legless are obstacles along the way. But they are not decisive obstacles. And the Jewish system, our system of vocational education, is meant to make of us attentive and responsive auditors.”

No one was a better story-teller than Leibel. Here is one of his most profound:

“Imagine we are gathered in a performance hall, our minds hardly focused on the Messiah. Suddenly he enters and announces himself. His presence is so compelling that all of us instantly recognize his authenticity. Some of us burst into applause, cheering, others weep, overcome. But very soon a few of us begin to get uncomfortable, even angry, and we ask, ‘For God’s sake where have you been?’ The Messiah has no answer. Where indeed was he during all the savagery and tragedy? Shamed the Messiah leaves. This was the question he feared. He wanted to arrive unnoticed at a time this terrible question wouldn’t be asked. How can there be such a time? Not on the last day but on the day after the last day: On the day that his coming has been rendered irrelevant.”

Leibel worked a lifetime trying to render the Messiah’s coming irrelevant. His work wasn’t waiting for the Messiah but bringing the Messiah he didn’t even believe in!

Leibel was the moral conscience of Jewish public culture. The world lost someone irreplaceable. I lost an irrepressible presence in my life: a man who shaped my mind, my heart, my spirit and my moral imagination. I am sad, very sad. But as Leibel taught,

His story will not end. We will stand on his shoulders and continue to make his life a blessing.