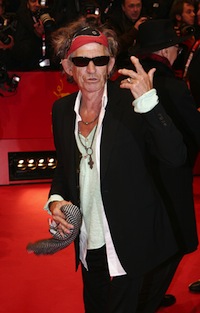 Can you believe Keith Richards turns 70 this coming Wednesday? I saw the Stones for the first time 40 years ago and have tried to see them at least once every time they have toured since. We all feel a certain way about the music that first made us feel a certain way about ourselves and the Stones were the first to make us feel sympathy for the devil. In honor of Keith’s 70th, here is some wisdom in his own words.

“For many years I slept, on average, twice a week. This means that I have been conscious for at least three lifetimes.”??
“It’s really good to be here and as I always say, it’s really good to be anywhere!”??
“The rock’s easy, but the roll is another thing.”??
“To write a song that is remembered and taken to heart is a connection, a touching of bases, a thread that runs through all of us. A stab to the heart.”??
“We age not by holding on to youth, but by letting ourselves grow and embracing whatever youthful parts remain.”??
“I’m not here just to make records and money. I’m here to say something and to touch other people, sometimes in a cry of desperation: “Do you know this feeling?”??

Here is a beautiful informal version of Wild Horses, one of Keith’s many great songs.

Keith wrote the first few lines for his son Marlon, about the pain of leaving him as he was about to go on a tour and Mick Jagger finished for Marianne Faithful. The meaning of the song: Wild Horses can’t drag us away from those we love…no matter how far we go in time or space. Happy Birthday Keith! May you get Satisfaction.? –Irwin