Hanukkah Not ‘Jewish Christmas,’ Or Is It? 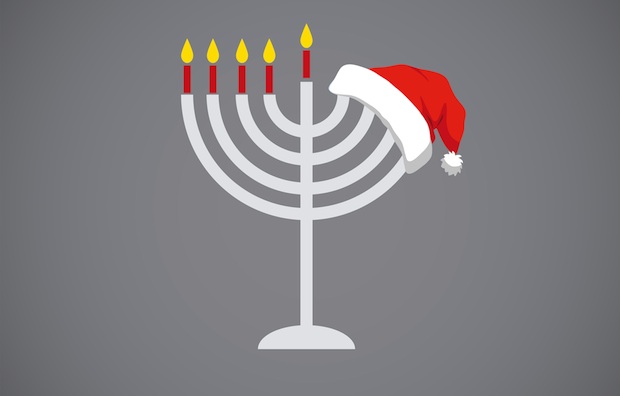 Hanukkah 2014 begins tonight, December 15, at sundown. That date corresponds to the 25th of the Hebrew month of Kislev, for you Jewish calendar buffs. And why does the holiday begin at Sundown, not midnight, as all days on the secular calendar? Because according to Jewish tradition, every day begins at sundown.

Think of this as both a tribute to how time is counted in the Genesis creation story – “And it was evening and it was morning…” – and also as a way to let people know that even though most folks see the sun set and think of what is ending, Jewish tradition reminds us that as much as something is ending, a new day is actually beginning. It’s about celebrating possibilities even when others may not see them. That capacity is central to the Hanukkah story.

The story of Hanukkah, celebrates the victory of a small Jewish army in the Land of Israel, fighting for a combination of religious, cultural and political liberty between 167 and 163 BCE. They were a small army of inexpert fighters waging war against a large, well-trained, imperial force, and yet they won. How? It was a miracle.

So, is Hanukkah really the “Jewish Christmas” as people often describe it? The answer to that is both an emphatic “no” and also an equally emphatic “sort of.”

Whether a miracle by God, or that of the human spirit – a debate I leave to theologians and philosophers – the victory happened, as most such great things do, because people decided not to limit their aspirations to what was likely, but instead dared to pursue their dreams.

Why is Hanukkah eight days long? Hanukkah lasts eight days for two reasons, one well-known, and the other much less so. According to the better known story, the holiday lasts eight days in honor of the eight days that oil, which should have lasted only one day, lasted miraculously in the newly re-dedicated Jerusalem Temple’s menorah (sanctuary candelabrum).

According to the lesser known story, Hanukkah was actually the eight-day-long biblical Feast of Tabernacles which had not been observed in the fall because of the war. That people realize we have it within us to recapture lost moments and make them just as sacred the second time around, is pretty miraculous in and of itself. And at the very least, it’s a pretty good life lesson.

So, is Hanukkah really the “Jewish Christmas” as people often describe it? The answer to that is both an emphatic “no” – and also an equally emphatic “sort of.”

While Judaism and Christianity are two distinct traditions, they are related both historically and also in their desire to bring meaning, purpose and love into the lives of all those who open their hearts to them. In the case of both Hanukkah and Christmas, we have stories of finding greater possibility and sacredness in the world than one could reasonably expect, and of doing so in the most unlikely of places.

Whether in a little jar of oil that lasted longer than it “should” have, or in the birth of a child in a Bethlehem, these stories remind us that good things do indeed come in very small packages. Our job is to open our eyes and our hearts to that possibility, recognizing that when we do, miracles really do happen.

Hanukkah really is an amazing holiday – one that testifies to people’s ability to create light where there is darkness, bring hope when most despair, and not only await the future, but create it. Whether one calls that the Hanukkah story, the Christmas narrative, or the American story, it’s a story deserving all the joy and love we usher in this time of year.

For more discussion, see this post from Brad on foxnews.com