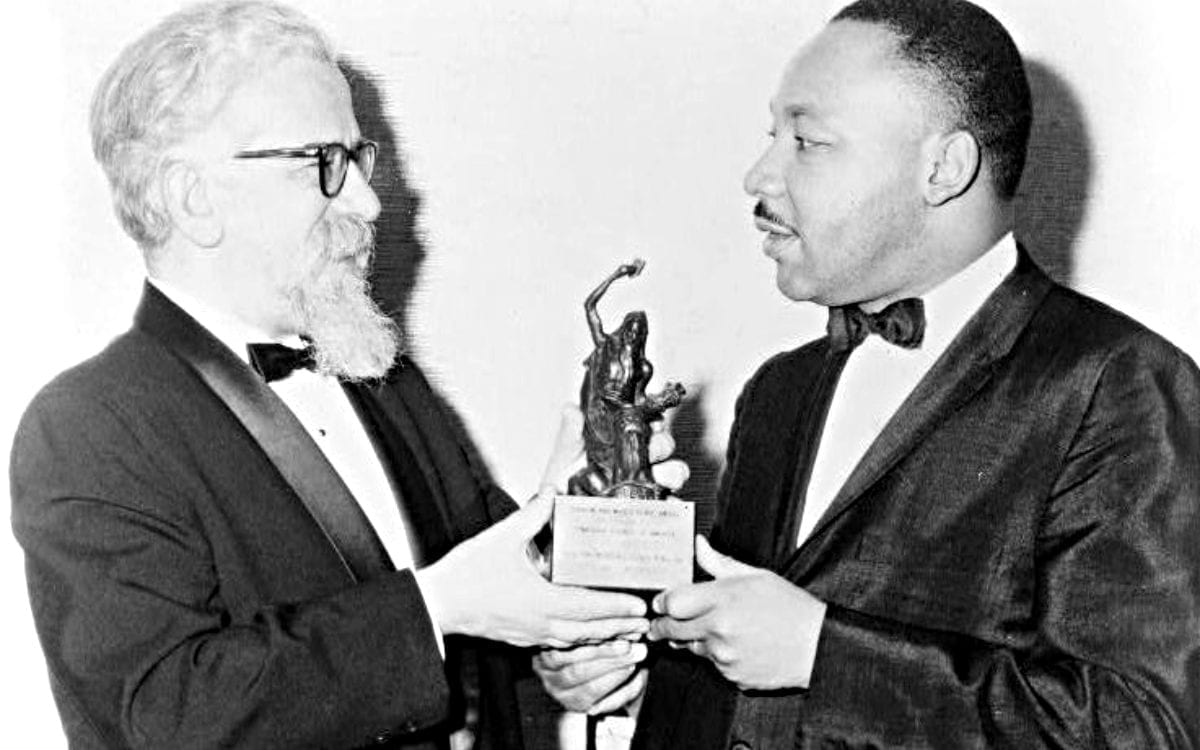 While they are marked on different calendars, the yahrzeit of Rabbi Abraham Joshua Heschel on the 18th of Tevet and the birthday of Reverend Martin Luther King Jr. on January 15th always fall fairly close to each other and always come around the time we begin reading from the book of Exodus.  This timing creates a bridge between the two men and what they stood for that allows us not only to remember their closeness but also the way their legacies differ from and complement each other.

Both Rabbi Heschel and Dr. King were men of uncompromising faith who acted in ways that challenged others to rethink their own assumptions about the link between faith and social justice.  In the case of Heschel this challenge was expressed not only in his courage to leave the desk in his office and the precinct of his synagogue to march for civil rights but in his call to break through what is rote and see the wonder of G*d’s creation and responsibility to each other.

Dr. King came from another place.  For King and the Black church, the pulpit was already a place to raise up the voices of the unheard in the name of a theology of salvation.  King made sure that those words were heard and the mission was engaged not only by those in his pews but on the streets and in the halls of power everywhere in the world.  When King and Heschel locked arms, it was not only two men showing solidarity for a cause but the connection between Heschel’s radical amazement and call to question complacency and complicity and King’s fierce urgency of bringing equality and justice where racism and violence reigned over Black people not yet fully free.

Both religious leaders drew from the story of the Exodus which we begin this week in synagogue and the story of Moses’ path from Prince to Prophet which helps highlight the intertwining of spiritual awakening and commitment to solidarity with the oppressed.

The circumstances of Moses’ birth exempt him from the suffering of the Israelites and he grows up removed from the burdens of enslavement. However, he becomes aware of his connection to his people and makes a fateful decision when he sees a man being beaten by another, an Egyptian overseer brutalizing a Hebrew slave.  He does not ignore the violence and does not refrain from his own. He kills the Egyptian and buries him in the sand. Soon after, when he fears his own life is in danger, he flees to Midian, a land neither of bondage nor Divine liberation. Moses finds personal fulfillment there.  After protecting his future wife Tziporah and her sisters from harassment, Moses is recognized for his righteousness, finds love and family, and achieves his station as neither a prince nor a slave.  He is content and comfortable. And then while shepherding his father-in-law’s flock he sees a bush which burns and yet is not consumed.  He doesn’t pass by and his curiosity and willingness to question the way things are leads him, albeit reluctantly, to return to Egypt and seek the liberation of all his people chained to their hard labor.

However, Moses protests that he is not the man to lead the people.  There is in this protestation certainly a great humility from which to learn.  Yet there is also a reluctance to leave his life in Midian to go back to Egypt, even with the assurance that the journey would take the people to the Promised Land.

Moses will soon see that he has no choice, that the call from inside the flames will not relent.  But what if he did have the choice?  If instead of G*d’s irresistible command, he was simply made conscious of the unimaginable suffering of the Israelites and the continuing cruelty of their taskmasters.  Would Moses then be moved past his own doubts and lingering reticence?

Dr. King touches on this question in his speech “Birth of a New Nation”

“There seems to be a throbbing desire, there seems to be an internal desire for freedom within the soul of every man…Men cannot be satisfied with Egypt. They tried to adjust to it for a while. Many men have vested interests in Egypt, and they are slow to leave. Egypt makes it profitable to them, some people profit by Egypt. The vast majority, the masses of people never profit by Egypt, and they are never content with it. And eventually they rise up and begin to cry out for Canaan’s land.

Moses has a life in Midian and, like many of us, is thankful to G*d for what he has. That’s all he, and we, have vested in Egypt but it is enough to keep us from joining together with all of our kin, our brothers, sisters, and siblings in solidarity.  While the burning bush is a moment of awe which Heschel asserts “enables us to perceive in the world intimations of the divine, to sense in small things the beginning of infinite significance” the experience of G*d’ there moves Moses and us beyond our radical amazement and toward the mission of breaking the shackles that enslave others.

Dr. King had the faith that faced with the clarity of this mission the predominance of human beings would likewise answer “Yes. Send me”

Moses was given the promise that he would prevail, a promise none of us can be given. Dr. King asserted in several of his sermons that life has no meaning until we know there is something for which we would in fact give up everything, including our life.  These words are anything but hollow.  They are in fact so dense with history and consequence that they are muffled rather than clear, like an instrument whose interior must be unblocked in order to play. Yet these words about laying down one’s life are not just a portent of the assassin’s bullet or the violence that was visited on so many who fought against segregation and racism. Dr. King was expressing that, for each of us, there must come a point where we realize that living must be more than self-preservation.  That the road to the promised land leads through Egypt.

A powerful teaching of the Baal Shem Tov further emphasizes the essential relationship between personal inspiration and communal redemption.  When G*d sends Moses for the last time to inveigh against the Pharaoh and his hard-hearted refusal to let the people go, the language used is “come to Pharaoh” not go to him.  The Baal Shem Tov expounds that G*d is telling Moses that he must go to his own self in which he will find a Pharaoh – a part of himself that has no intention of letting go and, in fact, every one of us has such a Pharaoh as well.  Only by coming to this Pharaoh within can we release ourselves to be fully engaged in the work of overcoming in the world around us the oppression of the Pharaohs.  The same Moses who killed an overseer and ran away must become the Moses who defeats the part of him to whom he is a slave, knowing that this time he must stay to face the consequences.

We haven’t reached the promised land nor fulfilled the Dream, although we are always in danger of believing we have. The bridge between the 18th of Tevet and January 15th is not only one of calendrical time but of transformation of the soul and the world.  We are stationed on that bridge at this moment, constantly inspired to shake off our complacency for wonder and move through awe of G*d for the fierce urgency of establishing a beloved community where love and justice are hand in hand and each is free at last.