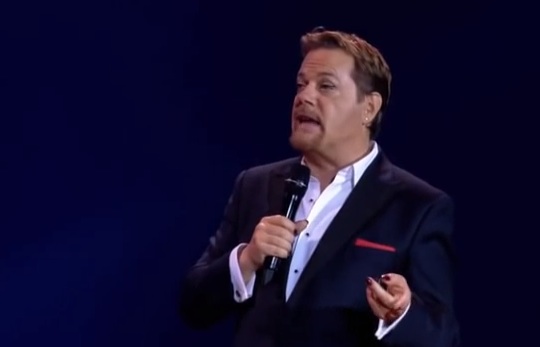 Oscar Wilde once said, “If you want to tell people the truth, make them laugh or they will kill you.” Eddie Izzard, the surreal, free-associative, British comic embodies this wisdom. I saw this self-described “action transvestite” at a wildly crazy, funny show on the New York stop of his 2014-’15 tour, Force Majeure – a title derived from the French for “Acts of God.” Force Majeure deals with grand philosophical ideas, but if it has a theme, it’s simple: There is no God!

Izzard hilariously reflects on the bizarreness of god-demanded human sacrifice and the crimes and brutality done in the name of higher beings. Listen to him describe a light-saber battle between Lord Darth Vader and God (who has a first name) over sharing spaghetti carbonara at a school cafeteria.

In his standup, Izzard also addresses a doubt about a God who never “turns up.” Channeling a reporter covering a natural disaster: “When there is a disaster, we turn up…we rely on each other…Doctors Without Borders will get just about anywhere to lend a hand…But no deity in sight, no God has ever, ever turned up. It’s just us; it’s always been us. If a God does turn up, I’ll eat my words, but until then – and think about it – should we be following anything that needs this much praise? You never vote for anyone who says, ‘Vote for me and I will lead you! But before I lead you, I will need more praise!'”

Izzard captures the increasing irrelevance of a traditionalist understanding of God. A recent study from the Public Religion Research Institute called “I Know What You Did Last Sunday” found that Americans significantly inflate religious participation. There’s a persistent gap between the number of people who claim to go to worship services and the number who can actually be counted in pews. For years, Americans have overstated their own religiosity, as poll after poll has found more Americans who do not identify with any religious tradition. Simply put, we exaggerate our religious beliefs and behavior. Izzard’s farce to be reckoned with reflects this widespread quirk. It is indeed Time for a New God.