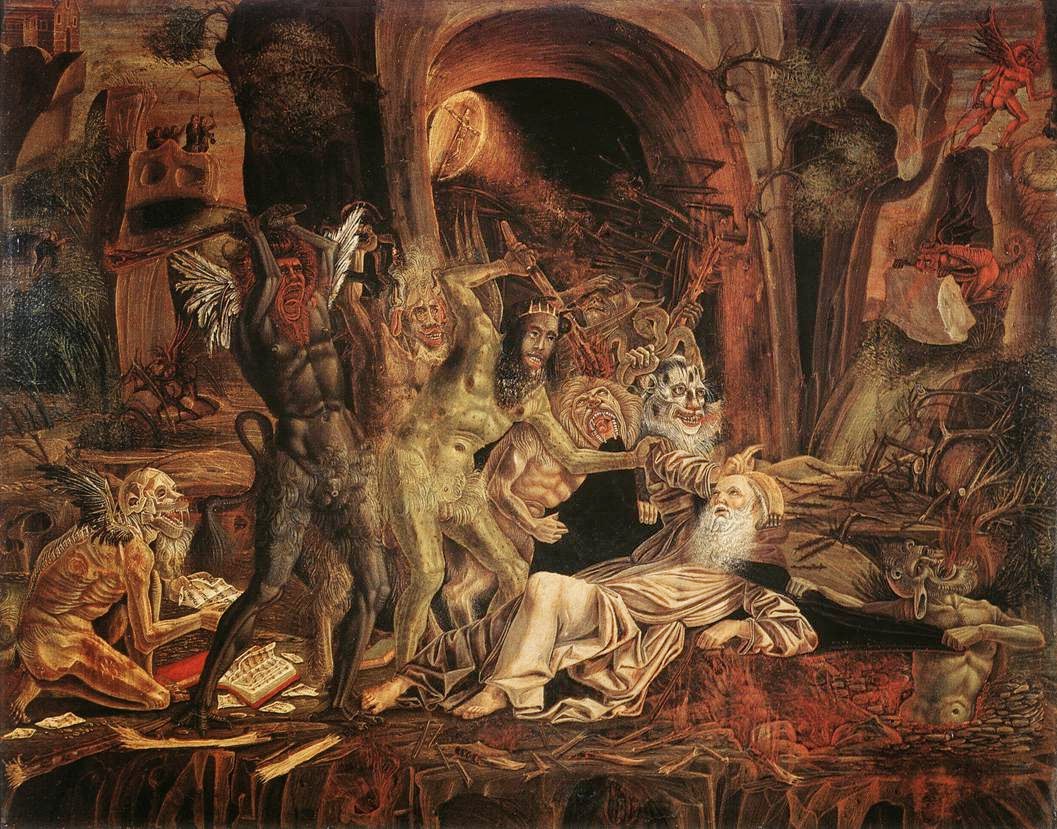 Most people are familiar with the 7 Deadly Sins – or at least that such a list exists – which are Pride, Envy, Wrath, Gluttony, Lust, Sloth and Greed. They are called deadly because it is understood that these attributes of the human psyche, when left unchecked, are so corrosive as to lead directly to death – not just of the body, but the soul as well.

What is less well-known is where this list comes from. It originates not from the Bible, but from early Christian theology – with its roots in Stoic philosophy – which designated 8 Thoughts (as opposed to sins) deemed detrimental to the contemplative life. This original list, comprising of Gluttony, Lust, Greed, Sadness, Anger, Acedia, Vainglory and Pride, was compiled by the 4th century theologian and monk, Evagrius Ponticus.

A highly educated Classical scholar and, by all accounts, a bit of a dandy, Evagrius rose to prominence in ecclesiastical circles in Constantinople, but left it all behind to become a desert monk in lower Egypt, where he taught and wrote prodigiously. His theological writing, with its Stoic undertones, landed him in hot water with church authorities, which led to him being tried for heresy 3 times. Posthumously, his writings were largely discredited, only to be appreciated in the modern age for their historical value. Still, the church seems to have liked his list of 8 Thoughts, which was re-jigged by Pope Gregory I in 590 CE, thus bestowing posterity with the 7 Deadly Sins.

There is an important distinction between Evagrius’ list of thoughts and Pope Gregory’s list of sins. The latter is rooted firmly in action, implies culpability and has severe moral and spiritual consequences for all. Evagrius’ list, on the other hand, is rooted in the realm of mind, concerns spiritual stumbling blocks rather than mortal threats, and is aimed solely at monks engaged in contemplation. There is also a distinction to made between our modern understanding of thoughts and Evagrius conception of them. We generally understand thoughts to be a mental process emanating from within the thinker; whereas, Evagrius considered them to be demonic entities that assailed the thinker from without.

To understand Evagrius’ 8 Thoughts, as he saw them, it is worth clarifying what is meant by the term contemplation in the context of Christian Theology. Although analogous to Eastern concepts of meditation – at least in outward appearance – Christian contemplation seeks not to empty the mind, but to focus it. Essentially, it is a fervent mental and spiritual discipline undertaken by only the most committed believers. The Catholic encyclopedia defines contemplation as: the complacent, loving gaze of the soul on Divine truth already known and apprehended by the intellect assisted and enlightened by Divine grace. Such a definition suggests that contemplation is a wholly beautiful pursuit, one designed to fill the soul with light; when, in fact, this definition is a sanitized version of the early Christian contemplation Evagrius had in mind, which deemed it equally important to stare down evil – specifically by visualizing hell.

It stands to reason the Church held onto Evagrius’ teaching of 8 Thoughts – albeit rebranded to fit later Christian theology – as there appears to be a timeless quality to the wisdom contained therein. This then begs the question: Does his teaching have any relevance today? I think, with a bit of tweaking, it most certainly does. If we lose the idea that demons engineer thinking and think of them as destructive thought patterns instead, and cast our net wider to include a more familiar, modern day visionary – say, the artist – then Evagrius’ list of 8 Thoughts has real merit. Consider the following:

As an action, Gluttony is associated with excess and gorging; but, as a thought process it concerns the anxiety inducing fear that our basic needs will not be met in the future. Focusing on such fear, according to Evagrius, can lead to the abandonment of one’s path and is a common reason for doing so.

The fear of starving to death is indeed a powerful stumbling block for many artists. Faffing about expressing yourself, or the essence of the age, won’t pay the bills, you’ll be out on the street, eating out of a dumpster, no one will want you and you will die alone, or so the thought process goes. Evagrius’ remedy? Shoo such pesky thoughts away and carry on.

True to form, Evagrius’ is not concerned with lustful actions, but with lustful thoughts, which he describes as being so powerful as to make it appear like the other person (or persons, as the case may be) is present. He is, of course, talking about the hallucinatory effects of fantasizing; which, for the artist, could go beyond sexual lust to include fantasies of power, fame and fortune. No no no, cries Evagrius. Such mental dalliances lead to a distorted reality and contaminate the soul.

Evagrius describes greed as the love of money, which leads to a paranoid fear of the future, especially concerning one’s prospects in old age. Thoughts of this nature are death to the artist. How many creative souls abandon their artistic practice for a secure job with a pension plan? The true artist is not at liberty to take such cares into account; focus must stay firmly fixed, not on the future, but the present.

Evagrius posits two sources of sadness: that which arises from anger and that which arises from frustrated desire. In his treatise, he focuses on the latter and says it plagues the contemplative with a longing for the past, thereby robbing them of their focus in the present. This mode of thinking is certainly detrimental to the artist, especially when predicated by thwarted opportunities and/or perceived or actual failure.

Evagrius calls anger the sharpest passion and warns of its corrosive effect on both body and soul. Of greatest threat are angry thoughts directed at another person, which ooze out of the thinker like a toxic sludge and ruin the countenance. The artist would do well to avoid angry thought processes all costs; for that which can destroy body and soul can, most certainly, destroy art.

Acedia (aka. discouragement) is an interesting one. Evagrius called it the Noonday Devil, and described it as a type of abject lethargy that overtakes the contemplative between the hours of 10 and 2 and is responsible for powerful distortions of perception – like the slowing down of time. Further, he calls it the most dangerous of the thoughts; because, while under its influence, the greatest number of contemplatives will abandon their quest and head for greener pastures.

How very true this is when it comes to fulfilling an artistic dream. Inspiration, at its inception, is delicious and filled with dynamic energy; unfortunately, it rarely carries the artist through to the completion of a project. Rather, during the noonday of a creative endeavor, boredom, listlessness and a profound sense of what’s the point, often pervades. This mindset is recalcitrant, warns Evagrius, not to mention slippery and full of charm, sweettalking all those you listen into leaving their path. But, those who stand their ground and overcome this ruiner of many a brilliant endeavor, will be, according to Evagrius, “taken over by a peaceful condition and by unspeakable joy.”

Vainglory is described by Evagrius as the false sense of security and satisfaction one receives from human achievements. Such glory – considered superficial at best and deceptive at worst – is fine while on the receiving end but is ultimately in vain and leaves one vulnerable to pride and/or sadness once it disappears; which, Evagrius assures, it most certainly will. Only a pure motive at the heart of an artistic endeavor can safely usher the artist through dangers and vagaries of human achievement.

Here Evagrius is worth quoting, because…well, I couldn’t say it better myself.

The demon of pride conducts the soul to its worst fall. It urges it: not to admit God’s help, and to believe that the soul is responsible for its own achievements, and to disdain the brethren as fools because they do not all see this about it. This demon is followed by: anger and sadness and the final evil, utter insanity and madness, and visions of mobs of demons in the air.

I guess that’s the 4th century way of saying: It’s not all about you! A sobering exhortation for every artist, and one well worth heading.

So, there we have it, Evagrius’ 8 Destructive Thought Patterns. Personally, I think they are remarkable and possess timeless insight and universal application. This is hardly surprising. Evagrius was a very clever man and was counted among the intellectual elite of his day. He surrendered the trappings of honor and power to live the contemplative life and thought long and hard about his ideas. He was a humble and devout man, interested only in accessing Divine truth. He didn’t just google Wikipedia and have a wee think on his sun lounger while on a holiday in Crete. No, he spent years in near solitude, day in and day out (and probably half the night) focusing his considerable mental energy into matters concerning the nature of God and the Universe. Surely someone who lived a life such as this is worthy our attention, if we too wish to live a life less ordinary.

[Disclaimer: this article is not intended to be a theological discourse; I am neither a theologian or a Christian, therefore, I have no business teaching articles of Faith, especially those of a religion not my own. Rather, I approach this subject from a historical and whoa, that’s interesting point of view. If you know more than me on this subject and have something to add, please do.]