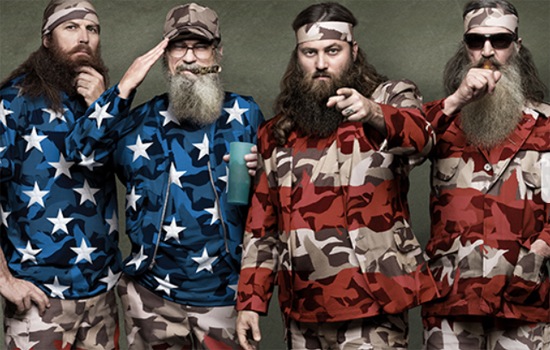 My resolution for this year: I promise to no longer take seriously any mock public controversies, especially those involving celebrities engaged in the culture wars.

When all is said and done the ten day media driven frenzy surrounding Phil Robertson?- patriarch at the heart of A&E’s smash reality hit Duck Dynasty?- who equated homosexuality to bestiality and claimed blacks were happy working in cotton fields was itself a reality show. The cast of characters played its role perfectly according to script.

First, we had our left wing stars who turned some carnival like reality TV character’s crassly stated biblical traditionalist views that were neither surprising nor of any significant influence into a major cultural issue demanding Robertson’s banishment. Then we had our right wing hypocritical response?- moral outrage at the left’s infringement of freedom of speech as if this had anything to do with freedom of speech and as if those so outraged never themselves call for firing people over having the wrong views.

Following the script, we had our corporate actor, ever sensitive to the marketplace, meaninglessly suspending the offending character?- while the show wasn’t even taping – and then after just enough blowback from loyal viewers to insure even more ratings next season, rescinding the suspension after nine days.? Of course, how could the controversy not have the star celebrity himself apologizing which Phil did claiming “he is a lover of humanity not a hater” and saying, “We never, ever judge someone on who’s going to heaven, hell. That’s the Almighty’s job. We just love ’em, give ’em the good news about Jesus – whether they’re homosexuals, drunks, or terrorists.”

And then for extra drama we had Phil’s loyal family – wife, sons, and daughters in law, all standing behind their man saying the show could not go on without their patriarch. What a show!

We know about 20-25% of this country are conservative, biblical, traditionalists who share Phil Robertson’s views even if they would do so less graphically. And we also know there has been unprecedented social change with regard to race and sexuality that while for many of us is an expansion of our humanity, is for others destabilizing and even sinful. Did this controversy – the trending story for more than a week?- help address this in any way? Did we learn anything we didn’t know about each other before this? Was our public culture enhanced in any way?

How much more interesting it would have been if rather than simply defending Robertson, the conservative right would have both criticized Robertson’s gross if not hateful way of speaking while explaining what he might have been trying to say that represents the view of millions of Americans. And how much more productive if liberal human rights and gay activists rather than simply attacking Robertson’s homophobic and racist comments, had either simply ignored him as anything more than a TV created freak show or invited a serious conversation about how to help this last part of America deal with what has been profound cultural change and a culture war that has basically been won – while this controversy was flaring Utah legalized gay marriage!

And what if A&E instead of its faux suspension that was transparently cynical, had instead been honest and said 14 million people watch Duck Dynasty?- the biggest reality TV hit in cable history and our demographics tell us that the black and LGBT communities are not major viewers.? While we strongly and deeply disagree with Phil’s views and for the hurt they caused we are not responsible for his personal views. Nor are his views reflected in any way on Duck Dynasty, which is just a reality sit-com?- a fun, family friendly show about relationships, hunting and faith. In fact, we even edit out Jesus from the family’s prayers so as not to offend anyone.

Alas this is not what happened. Duck Dynasty is too big of a brand with hunting DVD’s, clothing, books on cooking and religion, wine, door mats, action figures for companies such as A&E, Wal-Mart, Target. And we for some reason are too entertained by these celebrity controversies. But don’t we pay a price when spectacle deflects us from actually dealing with each other’s fears and hurt and instead creates more nastiness, mistrust and polarization between citizens?

News flash:? Duck Dynasty is back with a bang. The gun maker Mossberg has teamed with Duck Commander, the company owned by “Duck Dynasty’s” Robertson clan, to release nine different shotguns, as well as two semiautomatic rifles and a semiautomatic pistol.