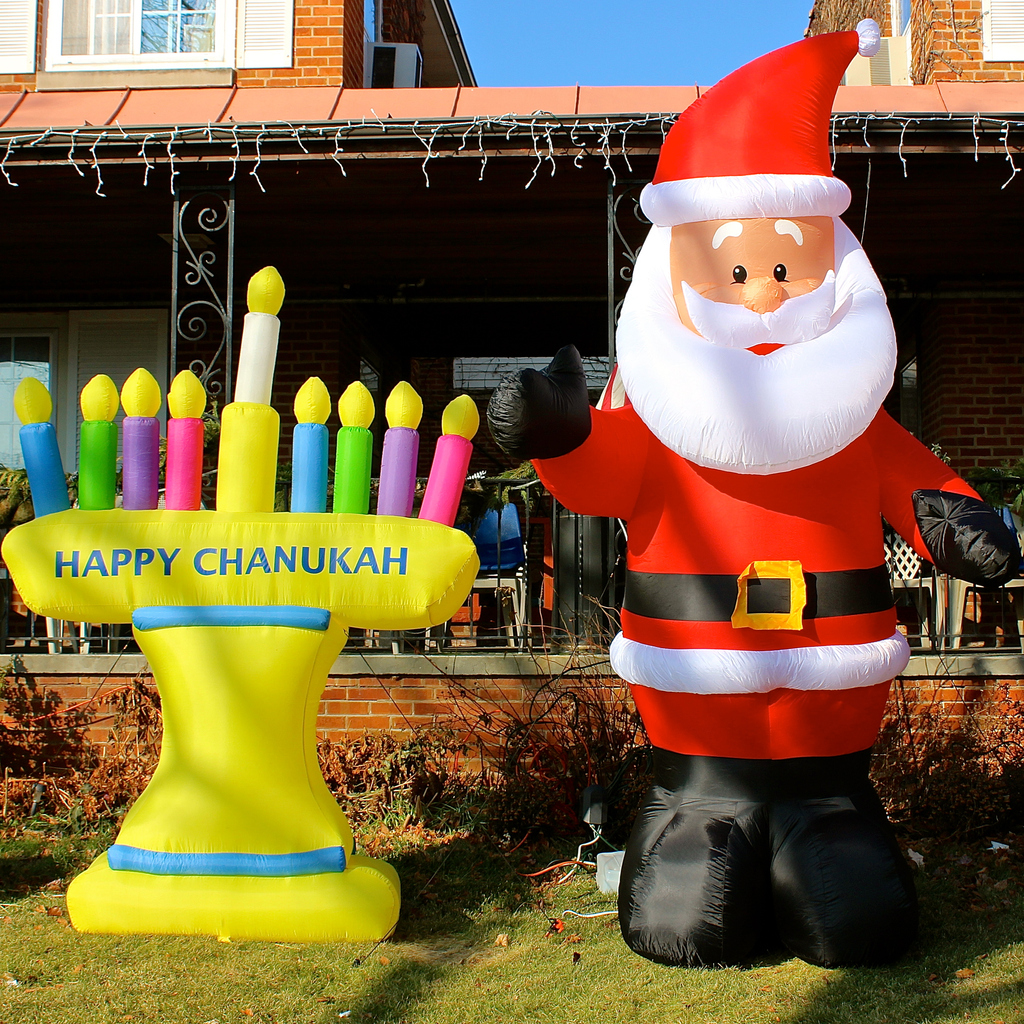 Itzhak Perlman, the world-renowned violinist, and Jewish musicographer does an annual program for Chanukah that airs on NPR. Perlman tells stories and plays music in Hebrew, Yiddish, and Ladino, in addition to English and even a classical piece Judas Maccabeus as interpreted by Beethoven. Easily filling up an hour, the program puts a lie to the oft-repeated lament that there really are only one or two Chanukah songs.

And yet, that lament rings true as well. “I have a Little Dreidel,” “Oh Chanukah” and perhaps “Maoz Tzur” are on repeat in the Chanukah imagination. The disconnect is that most of the songs Perlman plays or describes come out of a different connection embedded in history and culture. In the United States, we have access to these histories and cultures, but more often than not those roads are not taken. Instead, the greatest Jewish contributions to December Holiday cheer are Christmas Songs, some of the most recognizable written by legends such as Irving Berlin, Mel Torme, or Jule Styne.

Jews and being part of or not part of the Melting Pot is not a new story and how Chanukah is recognized, ignored, or swallowed up in the December holiday season is a big part of it.  This year, though, there seems to be more emphasis on Chanukah, in part because leading into this time there have been such widespread public incidents of antisemitism and a rising sense of unease in many quarters.

Personally, I find myself having to work through my own feelings of going from being ignored and subsumed into the general Merry Christmas or Happy Holiday wave to being singled out, nicely, with a targeted Happy Chanukah by a stranger in the parking lot who puts together my being Jewish, the time of year, and the name of that holiday. They are doing what can only be called the right thing. Friendly, thoughtful, and accurately said. And somehow it still feels jarring for a moment to be noticed for being different. Careful what you wish for.

I had a similar feeling watching the latest and probably best attempt at making the elusive Hallmark Chanukah movie. As film critic Danielle Solzman says, the bar cleared here is pretty low, previous attempts trying to blend the Jewish connection to Chanukah into an overarching Christmas story. One of this year’s entries, the ridiculously titled Hannukah on Rye, however, has not a trace of Christmas and, while set on the contemporary (and in reality, diverse) Lower East side of Manhattan, lives in a world magically populated almost exclusively by Jews.

The story itself is a play on the classic anonymous pen pals who turn out to be rivals, deli owners in this version. We renamed it You Got Shlemiel, The Shmuck Around the Corner, or, because it is all orchestrated by a mysterious Matchmaker, Deus ex Shadchinta. The truth is that while watching it I thought, “every character young or old has the same Ashkenazi accent and the same sense of humor, no one is assimilated and no one wears a kippah. Jewish food is from the old country but not kosher.  And latkes. Lotsa, lotsa latkes.”

And yes, I watched it out of bemused curiosity, and at first, it bothered me to be portrayed this way. I turned to our daughter and said, “we don’t sound like that, do we?” and, of course, I did.  The reality is that while the movie acts as if every Jew is the same, it also creates a world that is unambiguously meant to be Jewish. And, at the risk of being an Ashkenazi Jew with a particular sense of humor, I realize that Groucho Marx is right about not wanting to be a member of a club that would have someone like me as a member.  Again, be careful what you wish for.

So this is the dilemma that has attended in its own particular way every identity that is considered other in this country, many for much longer and with more at stake. Desiring to be like everyone else in treatment and rights and yet wanting to preserve our differences.  From the other side, I am aware of my own desire to show others that they are seen, to acknowledge Diwali or Ramadan, and at the same time to know that perhaps this person with whom I am interacting also wants to just go about her business without such a difference being highlighted.

Ultimately, the persistent concept here is knowing that our own differences are measured by the default of celebrating Christmas and being in sync with the calendar that leads to and from the Big Day.

Jewish families now may express our Jewishness by participating with blue and white lights and inflatable dreidels. Gifts that are ubiquitous, whether under a tree or beside the menorah are also in line with the Christmas season, whether in a house where it is celebrated or not.  While this matching up of celebrating Chanukah with Christmas traditions has at times been seen as a cause of concern, the reality as it is practiced allows for a kind of inclusion as well.  And for blended families, in particular, finding the common link helps these two holidays fit more neatly into one home.

To be honest, I am of two minds, which, in this case, is just a start. I do not want to feel excluded with a Merry Christmas or a tree in a school classroom and I don’t always love being included with the menorah on the side or even a well-meaning Hallmark movie.

In classic Tevye form, on the other, other hand I embrace the common threads that have tethered what has its roots as a combative resistance to the season of light, love, and peace.  In the words of Walt Whitman (not a Jew),” do I contradict myself? Then I contradict myself. I contain multitudes.” Or Yul Brynner (maybe a Jew),” it is a puzzlement.”

So our songs, beautiful and rich or perhaps played out, are not carols.  Unless we want them to be.