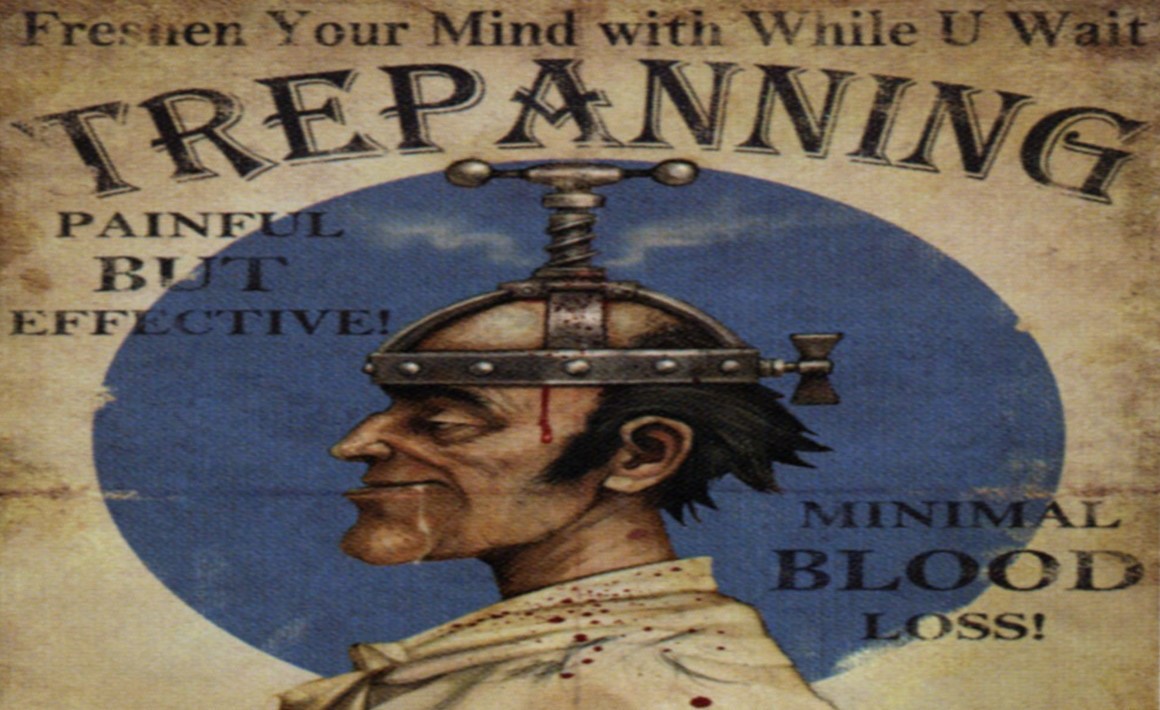 As anyone who has suffered from a migraine knows, the only thing that feels like it would help is drilling a hole in one’s head. So, it comes as no surprise that that’s precisely what people did long ago, not only for migraines, but for many other head-related ailments as well.

It is called trepanation (from the Greek word: trypanon – meaning: a borer), and is one of the oldest surgical procedures in the world, along with amputation and circumcision. Evidence of trepanation (also called, trephination) dates to Neolithic times, with a 7000-year-old trepanned skull having recently been found in France. Besides Europe, trepanation was practiced in China, Africa, South America and Australasia.

Cave paintings indicate trepanation was used to cure people of head-related ailments, including: epileptic seizures, migraines, and mental disorders. It was also used to rid people of evil spirits, and in attempts to bring the dead back to life. Evidence shows the holes were made by either drilling or scraping, and, in some cultures, the trepanned piece of skull would be kept as a protective charm.

The Greek physician, Hippocrates – considered the father of Western medicine (for whom the Hippocratic oath is named after) endorsed trepanation as beneficial for people with head injuries and seizures. Due in part to his endorsement, trepanation was a widespread practice in Medieval Europe. During this time, it was thought to be especially useful for curing insanity.

Detail from The Extraction of the Stone of Madness, a painting by Hieronymus Bosch depicting trepanation (c.1488-1516).

Trepanation is used in modern-day brain surgery, either to release pressure in the event of a head injury, or to perform brain surgery. It is now called a craniotomy, and the removed piece of skull is usually put back as soon as possible, or replaced with another material to close the hole.

Traditional trepanation is used today for esoteric reasons, with some believing it to be a path to enlightenment. Such people claim it raises consciousness, improves concentration and makes one feel permanently high. However, because elective trepanation is not a recognized medical procedure, those wishing to have it done must do so themselves.

The foremost modern proponent of self-trepanation was Dutch librarian, Bart Hughes, who believed it was the only way for adults to reach their full potential. Hughes trepanned himself in 1965; he claimed it took 45mins to complete the operation and four hours to clean the blood off the walls and ceiling. Ten days later, in a public “Art Happening” in Amsterdam, Hughes unwrapped his bandages and wrote HAHAHA on the pavement.

Some people thought Hughes was a genius and followed his path of enlightenment. Like British artist and altered-states researcher, Amanda Fielding, who trepanned herself with a dentist drill in 1970. She later campaigned to have trepanation available on the British National Health Service, but was unsuccessful. Fielding’s partner at the time, Joe Mellen, also trepanned himself, and wrote a book about his experience, called Bore Hole, in which he describes his 3rd and successful attempt at trepanation:

After some time, there was an ominous sounding schlurp and the sound of bubbling. I drew the trepan out and the gurgling continued. It sounded like air bubbles running under the skull as they were pressed out. I looked at the trepan and there was a bit of bone in it. At last!

Very few people trepan themselves these days, and you’d be hard pressed to find a reputable physician who would advocate it. But, as long as it is purported to lead to enlightenment, not to mention a state of feeling permanently high, I doubt it will ever die out completely. Either way, it remains a fascinating part of human history, especially as it was used by cultures that existed and developed independently from each other. Thus confirming what migraine suffers also know – there are times when drilling a hole in one’s head seems like the natural thing to do.