Video: Bowe Bergdahl and the 70th Anniversary of D-Day 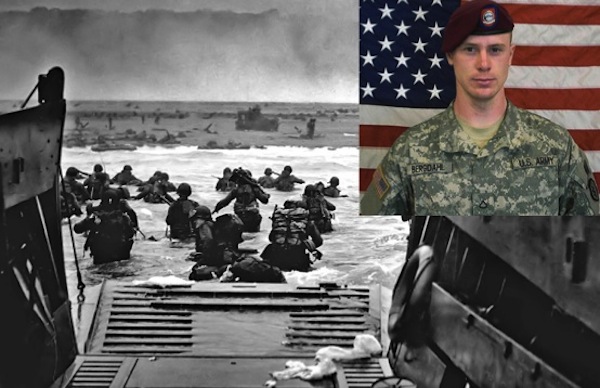 Bowe Bergdahl, the just-swapped for American prisoner held for five years by the Taliban, was definitely the story of the week. But today, June 6th, recalls the story of the 20th century, D-Day. Seventy years ago today, allied forces landed on the beaches of Normandy and the world began a momentous shift whose results still shape our lives today. I think they can also shape how we make sense of the story of the week, and it all comes down, as it does so often in life, to the ability to simultaneously appreciate the wisdom of competing truths.

All the debate about Bergdahl comes down to whether or not trading the guy for five Taliban was the good and right thing to do, or not, with each side marshalling evidence to support its view. My own conversations around this topic keep reminding me, that as with our understanding of so much of the news we encounter, our reactions are at least as much a Rorschach test as they are anything else.

The evidence, whether pro the deal or anti, is “nice” but the fact is that most people who are basically pro the war are anti the deal, and those who have been anti the war, are pro the deal. Bergdahl is simply the canvas upon which people are re-painting their feelings about America’s war in Afghanistan. Perhaps the events of 70 years ago can help us past that. Perhaps they can help us connect with the wisdom to be found among proponents of both positions regarding the swap for Bowe Bergdahl.

D-Day was a simultaneously a horrible and a wonderful day. The horror? More than 9,000 people killed on the allied side alone – mostly young men who would never live to see their 21st birthdays. One example comes from a man whose story I heard just today.? Yes, he lived, but it’s chilling just the same.

He was 16 years old that June 6th day he jumped into combat with the 101st Airborne, having lied to recruiters about his age. As they entered the jump zone and the plane doors opened, the jumpmaster gave the command, “stand up!” He then told the men to look to their right and then to their left, telling them that one of those at who they just looked would not be alive by next morning. And then they jumped.

The jump master was correct, at least statistically. A third of those boys never lived to see the dawn. A horrible story no matter how you slice the data.? Horrible and wonderful.

Just how is it wonderful? Beginning on that June 6th, the world began to turn toward the victory of decency and freedom. Both the best and the worst of humanity were in full force at one time, in one place. Not one in place of the other, but both together.

Just as horrible and wonderful must be held together to fully appreciate the events of D-Day, justice and mercy must be held together as we try to make sense of what happened and what will happen in the case of Bowe Bergdahl. Actually, his case offers the opportunity to experience America at its best – a culture which holds onto both compassion and accountability as defining our national culture.

Maybe Bergdahl abandoned his post and maybe not. Maybe he just made a stupid mistake. And maybe he really played no role in becoming a captive. Does it actually matter insofar as he is an American serviceman who should be brought home? That said, perhaps he really should be put on trial and receive a measure of justice for whatever crimes he may have committed. The two however should not be thought of as mutually exclusive.

Just as there must be room to remember the horror and wonderful triumph that is D-Day, we need to nurture both justice and mercy in the case of Bowe Bergdahl. That is how the story of the century can help us make sense of the story of the week.

For more insights on this story, watch Brad’s video commentary below from Odyssey Network’s Faith on the Record video series:

Images courtesy of britannica.com and wikipedia.org.