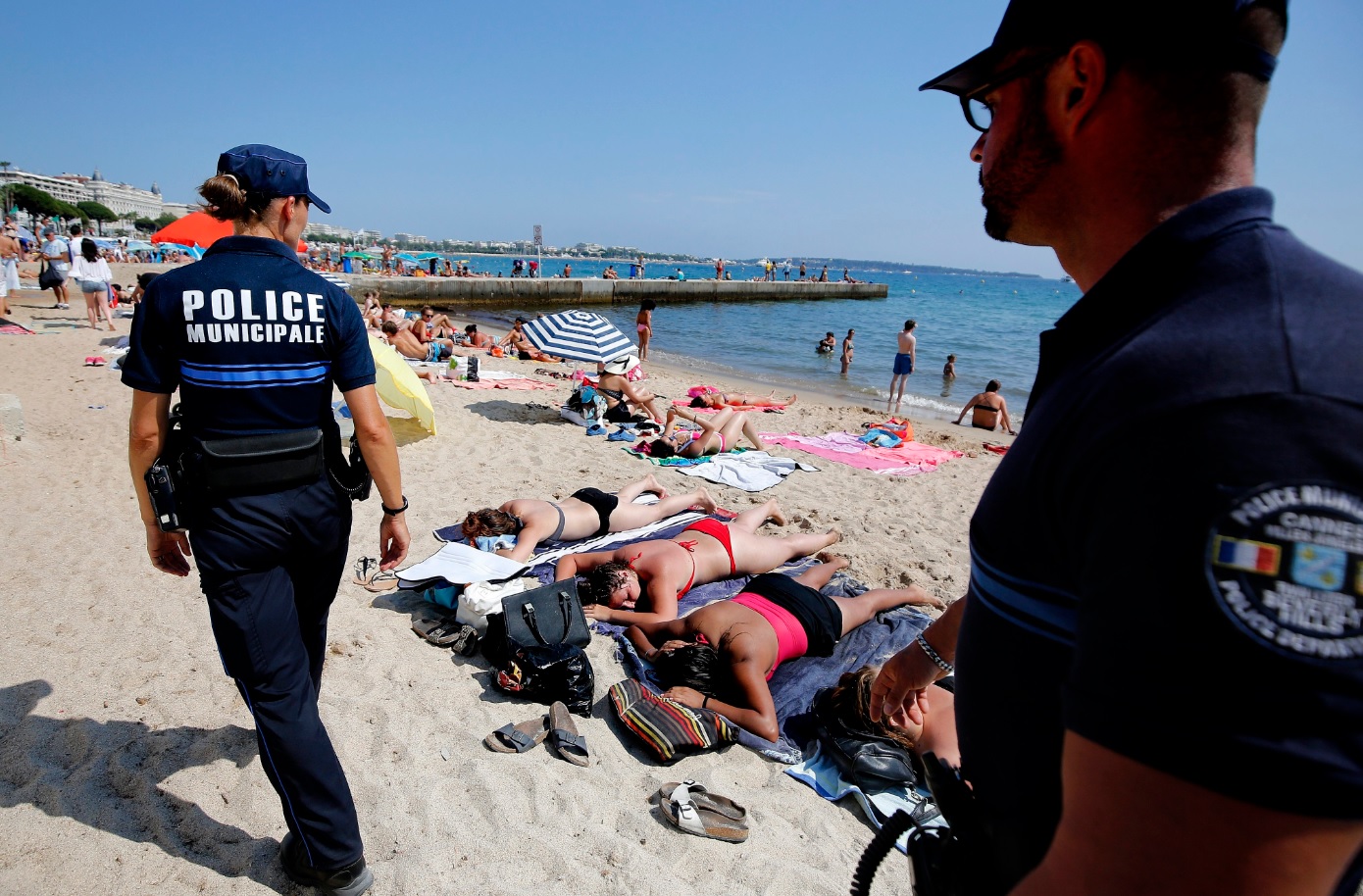 French authorities confronted a woman sitting innocently on a beach in Nice, insisting that she remove some of her clothing and then fining her for what she was wearing.  Her “crime”?  Wearing a “burkini”, —  a kind of cover up which traditionally observant Muslim women may choose to wear at the beach, in compliance with their understanding of required public modesty.

We are not talking about some garment designed to look like an explosive vest, or even something which covers the wearer’s face, potentially creating what some consider to be a security threat.  We are talking about a headscarf, a loose fitting top and a pair of baggy leggings.  If some hipster put this on, we wouldn’t even question it, but because it is identifiably Islamic, it is illegal in much of France.  You can’t make this stuff up, though I sorely wish I were doing so.

Banning burkinis is nothing less than rage-driven form of vengeance against Islam, in the wake of Islam-inspired terror attacks in France, seriously betraying the French ideals of Liberté, égalité, fraternité, and ironically taking what might be called an Islamist approach to combating Islamism.

Like the triumphalist zero-sum understanding of Islamism at its worst, banning burkinis assumes the legitimacy of stripping one group of their freedoms in order to make another group comfortable and secure about its own freedoms.  It demands the erasure of one group in order to honor the presence of another group.  If that isn’t Islamism at its worst, I don’t know what is.  It’s just that in this case it is not Islamism; it is dangerously misguided “French’ism”.  Different names for the same ugly practices.

Don’t get me wrong, I am not unsympathetic to at least some portion of the post-traumatic rage which is driving the burkini ban.  I have lost people I love to terror attacks, and buried its victims, so I understand personally how deep hurt can turn into irrational rage, but an understanding is not the same as an excuse.  There is no excuse for this ban.

Not only is banning burkinis a self-betraying policy, it points to a deeper and darker reality, to which all people dragged into fighting terror must pay attention.  The longer two sides fight against each other, the more they similar they become, and usually the influence of the wrong side of the fight is stronger than that of the right side.

There are definitely fights which need to be fought in this world of ours, but if we lose the thread of what we are fighting for – in this case, as the French would proudly declare: liberty, equality and shared sense of personal connection/destiny (my definition of “brotherhood”) – and are simply driven by against what and whom we are fighting, the war is already lost.  We may win a few battles, but in the end, we will have become a version of our own enemies, simply quoting different texts and mumbling different prayers.  Hardly worth the fight, and perhaps the perfect definition of a pyrrhic victory.

So bring back the burkini, and fast, and let it be worn on the same beaches where others go topless, as is the practice in much of France, insisting that both practices, and those who practice them, have a place in a world defined by genuine freedom.