A Police Officer, a Homeless Black Man and an NBA Star: A Story of Character 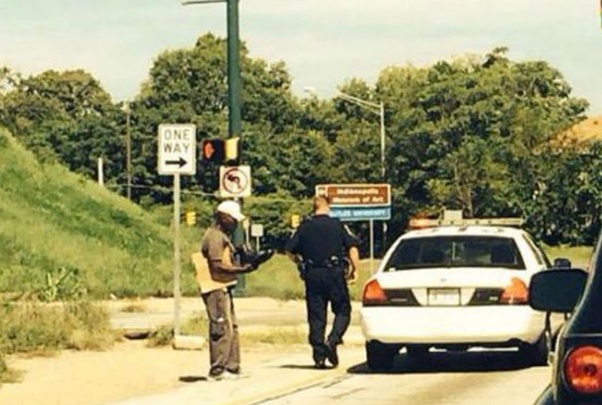 Obviously, there are serious tensions and real problems between the police and the black community across the country. Every black person in this country knows that being stopped on the street by the police is one of the more dangerous moments in life – something white people cannot understand. Addressing this will require police departments to make significant changes in their legal, political economic, historical, and social structures. But, as necessary and critical as substantive structural changes are, these are also psychological and ethical challenges. Law can protect equal treatment and equal rights but ultimately the character of those with power is determinative.

Last Monday, an officer from the Indianapolis Metropolitan Police Department stopped at a red light near an exit off a highway where a homeless man named Fred frequently panhandled and cleared trash. The cop didn’t pull over to give him a ticket or to hassle him. Instead, he took a new pair of boots from his trunk and gave them to Fred.? Watch this report to see what Fred did with the boots. Roy Hibbert, star center of the Indiana Pacers was driving by and captured the scene – he surely must have thought something else was about to come down. Hibbert’s posts went viral.

Just seen an Indy police officer pull over. Go into his trunk n give a homeless guy a pair of shiny boots. #COPS pic.twitter.com/36MxFs6g6x

@IMPD_News wish I knew the officers name or badge number. Would like to do something for him.

In today’s environment this was not a random act of kindness. This was intentional. And it went viral because despite our being hardwired to be more alert to negative news, we want a kinder world. The police officer has not come forward with his identity.

Character is what you do when no one is watching. But, there is always someone watching.